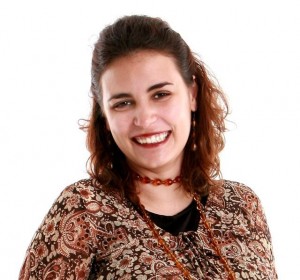 Today marks the beginning of NAIDOC week, which celebrates the history, culture and achievements of Aboriginal and Torres Strait Islander peoples.  Through my Diversity roundups for the AWW Challenge I draw attention to the wonderful and wide-ranging writing by Aboriginal and Torres Strait Islander women writers, and this month, in the spirit of NAIDOC week, it would be great to see some reviews of their books.  You can also head to ANZ LitLovers, where Lisa Hill is holding a challenge for this week, whereby you may sign up and review a novel by any Indigenous writer from around the world.

As part of our celebrations, I have interviewed author Ambelin Kwaymullina. Ambelin is an Aboriginal writer, illustrator and law academic. She comes from the Palyku people of the Pilbara region of Western Australia. She has published a number of picture books as well as a dystopian series – The Tribe – for young adults.  The first book of this series, The Interrogation of Ashala Wolf, has received enthusiastic reviews from a number of AWW’s readers over the last few years (see our review listings for 2012 and 2013), and I’m looking forward to reading the second, The Disappearance of Ember Crow. In her interview, Ambelin discusses the importance of holism, connections, mirrors, listening, and storytelling.  If you’d like to know more about Ambelin and her books, you can visit her website at www.ambelin-kwaymullina.com.au.

Also, if you’d like some ideas for books to read this month, you can head to the Indigenous Authors reviews on our Review Listings page.  I really look forward to reading your thoughts!

What was the first piece of writing you can remember creating? What then set you on the path to becoming a writer?

I always wrote. But I gave it up for a long time, because I lacked faith in myself (I still wrote but not seriously, and if you want to be a writer you have to pursue it seriously; it cannot be a hobby). What set me on the path of writing again was a dream.

I dreamed a story about a crow, a tale with a message about valuing yourself. That story became Crow and the Waterhole, the first book I ever published. It was also the first book I ever illustrated. And I have always believed that the story itself was a gift from my ancestors. They knew I needed to hear the message of it.

How does your Indigenous culture influence what and how you write? My people, my family, my culture, my Country – this is who I am. So of course it is in every aspect of what I create. There are times when that influence is not always obvious to those looking in from the outside. For example, I get a lot of comments that it’s unusual to be an Indigenous speculative fiction writer. But worldwide there are quite a few Indigenous authors writing into speculative fiction, and to some degree we all incorporate who we are into what we write.

There is an anthology of Indigenous science fiction called Walking the Clouds, and in it, Aninishaabe scholar Grace Dillon writes that all forms of Indigenous futurisms are part of a process of returning to ourselves. Perhaps this describes all Indigenous stories; we are always who we are, in whatever genre we write. And for some specific examples of the way in which aspects of Aboriginal culture winds through The Tribe series – it is in the bonds that the Tribe have with the animals of the forest; in kin relationships that sustain them through the hardest of times; and in an earth alive with greater wisdom than human beings can fathom.

What was the inspiration for The Tribe series, and why did you decide on the genre of a dystopia?

I wrote about real things. And I know that sounds strange for books set hundreds of years into the future. But I write of children and teenagers in danger, and for far too many of the young of this planet, that’s just another day. Worlds end all the time – they are shattered into pieces by violence, war, poverty, and hatred – and dystopias exist on this earth. I didn’t invent a world where the young are vulnerable. I just write about how they defy that reality.

Your picture book Crow and the Waterhole is about reflection, a theme which also appears in your essay  “Seeing the Light: Aboriginal Law, Learning and Sustainable Living in Country.” Is this a theme which is particular to your work, and/or are there other themes to which you often return? Both those uses of reflection actually relate to Aboriginal culture and experience. I’ve talked about Crow and the Waterhole above. And the issue of all the young people of the earth being able to find their own reflection in the world is one that concerns me greatly. I know too well how many negative images of Indigenous peoples exist, and the effect those images can have. I’ve spoken about this before in an interview where I talked about mirrors continually displaying a distorted image of yourself, and I asked the question “If that was the only face you ever saw, if that was the image continually reflected back at you, might you not come to believe that it was all you could ever be?”

In the Seeing the Light article, I was talking about holism.  One of the broad commonalities between the diverse Indigenous cultures of this world is holism; we look to connections and the place of things in context. And yes, holism is a big feature of just about everything I write. There are repeated references throughout the Tribe series to the importance of connections; and it is in the end a group of disparate people, some from the marginalised of that world and some from the privileged, who will come together to change their reality for the better.

How do you juggle writing and a day job?  Does one inform the other in any way? ‘Juggle’ probably implies a greater degree of skill than I have; I’m not always so good at keeping all the balls in the air. I snatch whatever time I can to write and I’ve taught myself to be able to do it in five minutes, or ten, or sixty – whatever bit of time is available to me I will use as best I can. The useful thing about working under pressure is that it doesn’t give you much opportunity to worry about doing something wrong. Time spent on self-doubt is time wasted, and I’ve got very little time to begin with.

My day job is as a law academic and there’s no shortage of connections between law and storytelling. A lot of Indigenous legal scholars have written of the way in which colonial stories about Indigenous peoples (and particularly about Indigenous women) have informed, or rather mis-informed, the law. And in my own culture, much of our law is communicated through stories.

What are some great books by Indigenous women writers which we should be reading? Read all of them.

They are wonderful stories. And for non-Indigenous readers, it is only way to begin to grasp the diversity and complexity of the lives of Indigenous women. So don’t stop at one story, or two, or ten, and don’t limit yourself by genre – Eurocentric story-categories are in any event often a poor fit for Indigenous narratives. More importantly still, don’t limit yourself by any preconceived notions of what it is to be Indigenous. In the words of Eastern Arrernte elder Kathleen Kemarre Wallace: “Come, listen to us, we will tell you our culture…appreciate you might not know the answer or understand the question. That’s what it means to work in a cross-cultural way. Respect has to flow both ways, learning too.” [Kathleen Kemarre Wallace, Listen deeply, let these stories in, IAD Press, p 171] Accept the stories on their own terms and let the voices speak for themselves. If you are struggling to find books, a good place to begin is the catalogues of Aboriginal publishers (Magabala Books, IAD Press, and Aboriginal Studies Press). Move on from there to all the other publishers; you may also find the BlackWords database on the Austlit website to be useful.

But don’t read the stories for us, or at least not only for us. I personally believe that anyone who engages with the many cultures of this world out of some hazy notion of doing good for others has entirely missed the point. Diversity is one of the wonders of this earth. To interact with cultures different to our own is to be bewildered and amazed and inspired; it is to travel through worlds and be presented with new visions of what is and what could be; it is expand our understandings of the possible. Who would pass up an opportunity like that, if it was offered to them? And it is offered. It is presented in the form of life histories, articles, cultural narratives, picture books, novels, poetry and in the thousand of other ways in which Indigenous women cast out our voices into the world.

So read all the stories – and, to quote Kathleen Kemarre Wallace again: “listen deeply, let these stories in”.