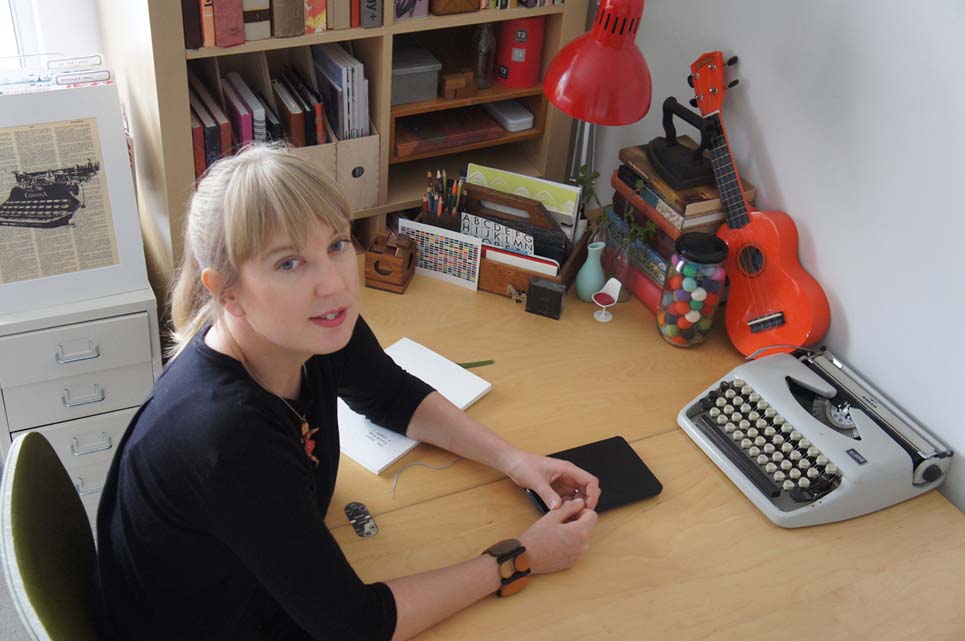 I can’t imagine ever not wanting to tell stories.
– Annabel Smith

In case you have been living under a rock, our very own Annabel Smith, she of the interviewing and other exciting things on Australian Women Writers, is not only an Australian and female but also a writer herself.

And so over the past few months, we have been badgering her to tell us about her third book The Ark, which finally in the midst of writing her fourth book she relented to do. You can’t accuse her of not being organised or prolific.

And The Ark is important – not only is Annabel going down the self-publishing route via Gumroad for this book but she has also created an app for the readers who want to delve into the experience a bit more via the wonders of digital publishing.

It says something about Annabel’s view of digital publishing and about her personality as well: rather than wait to tell a story in a particular format, she has jumped straight into it instead and gone it alone. She called the debate over digital publishing a “no-man’s land”:

“We seem to be in a no man’s land, where publishers are frightened to invest in books that seem too old-fashioned, but equally frightened by newfangled iterations of the book. It’s a time of great uncertainty in publishing.” she said, quick to point that out that while the media might herald the death of the book, in her experience so far, publishers aren’t going to completely let go of print books for a while yet.

The Ark by Annabel Smith

But The Ark is more than an experiment with formats, it’s also an experiment with the financial models that currently exist in the industry. Annabel may get more of a cut of the final sales of her work with digital publishing but she doesn’t necessarily have the resources of a traditional publishing house behind her to have the same level of sales or reach.

“Self-publishing The Ark has helped me to understand the prevailing fee structure in which publishing houses get 50% of the retail price, booksellers 40% and writers the remaining 10%,” she said. “Publishers take all the financial risk, and invest heavily to get a book out into the world. Increasingly, many books fail to break even.”

She even gave us figures to drive the point home:

“However, most writers can’t nearly make ends meet on a meagre 10% of retail sales. I sold around 1500 copies of my first two traditionally published novels, banking approximately $4000 a process, which roughly equates to $1000 for each year spent writing them.”

But she remains hopeful about what technology can do for the publishing industry:

I hope in the future there will be financial models which might be more mutually beneficial for authors and publishers.

The Ark can be read as a standalone book but then readers get to use the app if they want to learn more about the world the story is set in, want additional information or want to create content of their own related to the book.

“Advances in technology are presenting new ways for people to consume, connect with and interpret ‘fiction’,” said Annabel. “I wanted to play with some of these emerging options and discover for myself exactly how they might enhance the experience of reading a book.”

For other authors out there considering creating apps for their titles, be forewarned. It’s different and it seems to require a lot more organisation and is not as fun as it sounds:

“After the initial creative phase in which I developed my ideas, it basically became a project management task, involving meetings, emails, spreadsheets, budgets and timelines, etc,” Annabel explained. “It was time-consuming and sometimes dull. On the plus side, I worked with a fantastic team and enjoyed taking part in a collaborative project, compared to the solitary nature of most writing.”

But that’s the app. What all those who dream of following in Annabel’s footsteps want to know is, what’s the writing process like?

Annabel’s process has changed greatly over the years and from book to book. With her first two, she wrote in longhand but this changed with The Ark: “I wrote my first two novels longhand, switching to writing straight onto the computer for The Ark, because it felt counterintuitive to handwrite the text of a digital document like an email or blog post.”

The biggest change has been her shift from a “pantser” to a “plotter” – she now writes with a plan. In the case of her current work in progress, Monkey See, it’s with “an eight point story arc”: “Writing Monkey See I discovered Scrivener which I’m sure has changed my process in subtle ways, simply because I feel I can ‘see’ my book so much better now, and view it through a variety of filters.”

Monkey See is about, well, monkeys and tsunamis and of course one’s mind boggles a bit when trying to figure out what the plot could possibly be. It involves a cult that a spider monkey, Chaco as he is named, and his friends, must overthrow before a tsunami destroys their city. If that doesn’t appeal to the inner child in you then what will?

And there may be more than one book:

“He [Chaco] is a wonderful character – smart, loyal and super-tough,” Annabel explained. “I have written 60,000 words, with perhaps another 10,000 left to write, so I’m close to the end, but this is the first book in a trilogy, so in the bigger picture there is still a long way to go.”

So with three books on both the real and virtual bookshelves and one more, with possibly two others eventually, on the way, what advice does Annabel have for other writers?

“Think of it as a long game, and enjoy the process – and by that, I mean all of it – the writing, the learning, the reading, the conversations with other writers,” she wrote in her email to me. “The external outcomes such as publication and awards are much less important than the joy you take in the process.”

“It is wonderful to have a space of trust in which to first share a fledgling work, as that is a very nerve-wracking experience,” she said. “I have no doubt that the feedback of these writers has improved all my manuscripts, and has honed my writing skills in general.”

The act of close reading another writer’s work has also taught me a great deal.

And as all writers do, she reads widely. Voraciously, even. Her childhood was full of Enid Blyton, Nancy Drew and Sweet Valley High amongst classics like Anne of Green Gables, The Secret Garden and Little House on The Prairie but her current favourites include Ann Patchett’s Bel Canto, Yvette Walker’s Letters to the End of Love and Emily Bitto’s The Strays.

But that’s the past, what about the future? How many stories does she have left to tell? Or is there a never-ending supply?

“I can’t imagine ever not wanting to tell stories,” Annabel said. “I love how writing is not like a job – it’s not something people retire from – most authors are working on books when they die and I hope I’ll be like that.”

Telling stories seems to be something that always has been on her mind and despite her claim of probably being a master chocolatier if she couldn’t be a writer, her admission of a childhood ambition to be an actor seems more in tune with her need to spin a tale.

This childhood dream was set aside in favour of something that would be more lucrative as a career.  Which kind of makes you wonder why choose to write but she fell in love with writing during her undergraduate degree in English and went on to work on a PhD in creative writing.

Love may be the right term for it – Annabel claimed an addiction:

“The first book was difficult to write but by the time I had finished, I was hooked,” she said.  “Now I am unhappy if I’m not writing. Though it is sometimes – often – difficult, it is also strangely soothing. This is terribly unoriginal, but writing is a way for me to make sense of my world, to dig deep into the parts of life that puzzle or worry me.”

Which may go some way to explaining why there seems to be a theme of sorts of grief and loss that has run through Whisky Charlie Foxtrot and A New Map of The Universe. According to Annabel this is somewhat accidental and completely unplanned:

“I never consciously consider theme when I’m writing a book,” she said.  “The themes evolve organically, from the characters and their stories. In hindsight, it is easy to see there is considerable thematic overlap between my first two novels; both deal with unresolved family issues, with loss, and grief.”

Her view is that perhaps themes in writing reflect the author’s unconscious, possibly unresolved issues:  “I seem to have moved on to other themes now so fingers crossed I have healed some childhood wound.”

But there are stories to be told, be they in the digital or traditional space and format, whether they come with optional extras or not, whether they have thematic similarities or differences. And Annabel Smith, taking the plunge and exploring her options is an author to watch if you want to keep your finger on the pulse of what is changing in the publishing industry.

Because when there are stories to be told and you aren’t daunted by the prospect of an eternity in which to spin tales, you will spin them any way you can.

To jump into the world of The Ark and contribute to it by creating additional characters, documents and stories, you can check out The Ark‘s website for both the book and the app.