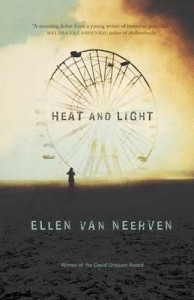 This roundup will reach you while you’re most likely easing out of your Christmas food comas. Why not lie back for a little longer and reach for another book? There’s plenty to chose from among these reviewed by AWW readers over November and December.

Four Indigenous authors were reviewed. Ju of The Conversationalist counted Ambelin Kwaymullina’s speculative fiction young adult novel The Interrogation of Ashala Wolf as her favourite read for 2014. Jon Shaw described Alexis Wright’s The Swan Book as moving ‘like a dream: the identities of places, people and other living things are unstable’ while the narrative voice, too, ‘is merciless to the reader’s desire for certainty.’ Stephanie Gunn, challenging herself this year to pick up more works by Indigenous authors, read Melissa Lucashenko’s Mullumbimby. For her, the cover image of ‘a bird’s nest woven from barbed wire, but lined with soft feathers and leaves for the baby birds’ summed up many of the themes in the novel, and she loved the protagonist Jo Breen, an ‘incredible character.’ Meanwhile, for me, Ellen van Neerven’s Heat and Light was one of the most gorgeous and amazing books I’ve read this year. There were also reviews of a handful of books by white writers which focussed upon Indigenous people or characters. Kylie Ladd’s Mothers and Daughters is set in Kalangalla, a remote Indigenous community outside Broome in Western Australia. Shannon of Giraffe Days thought that the characters ‘feel and sound like real people, as do the Aboriginal characters they meet and interact with.’ However, as much as she ‘found the novel entertaining, well-written and absorbing, it also felt just a bit contrived.’ Sophie Cunningham’s Warning: The Story of Cyclone Tracy, reviewed by Kathie Rea of the Newtown Review of Books, included an account of the Aboriginal experience of the cyclone, and the ‘neglect of people living in camps in and around Darwin’. Julia Tulloh loved Clare Atkins’ Nona and Me, the story of Rosie, a Ngapaki (white) girl, and her friendship with Nona, a Yolŋu girl. The author, she notes, ‘worked closely with a group of Yolŋu women with whom she’d lived in Yirrkala in order to ensure she wrote about the people, land and culture accurately, respectfully, and realistically.’ However it remains Rosie’s story, and there was an element of doubt on Tulloh’s part that ‘Nona is a side character who appears mostly in Rosie’s memories of childhood and occasionally in the present’ (this reservation was also echoed by an earlier review, mentioned in my October round-up). I also penned my thoughts on Margaret Merrilees’ The First Week, which contemplates the legacy of environmental degradation and dispossession created by colonialism. Of books that canvassed disability, there were another two reviews of Joan London’s The Golden Age, which includes a character with polio (one by Robyne Young of the Newtown Review of Books and another by Janine Rizzetti), while I reviewed Donna McDonald’s The Art of Being Deaf, one of my favourite books for 2014. It’s Not You,Geography, it’s Me, Kristy Chambers’ second memoir following Get Well Soon, charts her experiences of travelling with a mental illness, and was reviewed by Kylie Mason of the Newtown Review of Books.

It was great to see reviews of works by writers of diverse background: Maxine Beneba Clarke’s stories in Foreign Soil were reviewed by Jason Nahrung; Shelleyrae of Book’d Out and Kathryn at GoodReads reviewed Alice Pung’s Laurinda, while Brenda of GoodReads enjoyed Malla Nunn’s Let the Dead Lie. It was also good to see a poetry review, this one by Jon Shaw on Eileen Chong’s Peony, her second book of poems. Jon describes them as ‘shot through with the experience of migration, with a sense of displacement.’

On that note, there were also three reviews of Nicole Alexander’s The Great Plains by Shelleyrae, Rochelle and Marcia. The novel is set in America and Australia and touches upon the treatment of their respective Indigenous peoples. It canvasses the uneasiness of unbelonging and the yearning to belong, themes which can be found, for that matter, in all of the above books.

That’s it for 2014, folks. I’ll be back in January with my wrap-up for the year. In the meantime, enjoy your holidays and happy reading!

I’m Jessica White, a novelist and researcher, and I’ve been deaf since age 4 when I lost most of my hearing from meningitis.  I have a PhD from the University of London and have published two novels with Penguin, A Curious Intimacy (2007) and Entitlement (2012).  I’ve recently received funding from the Australia Council’s new Artists With Disability program to write my third novel, The Sea Creatures.  You can find more information about me at my website.  I’m also on Twitter @ladyredjess.