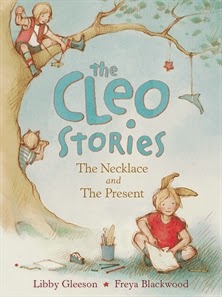 Welcome to our first round up of Children’s books for 2015. There’s been a wide range of books reviewed since the beginning of the year, and I’m thrilled to be able to share some highlights here. With the beginning of school across the nation, Brona shares some tips for parents of beginner readers as well as a review of a great beginning reader book –  The Cleo Stories by Libby Gleeson:

“Both stories relate an incident of importance to young Cleo – birthday party envy and anxiety. They show Cleo problem-solving and experiencing delayed gratification as Cleo learns that the true art of giving begins with listening.”

Jennifer read the classic They Found a Cave by Nan Chauncy, a book which she first read in the 1960s. It’s the story of four children who have been sent to live with an aunt in Tasmania after the break out of war in 1939. When their aunt needs to go for medical treatment, the children are left in the care of a friend’s parents (who are awful) and end up running off to hide in a cave.

“I first read this novel (and then saw the film) during the 1960s. I loved it. An adventure story for children set in Tasmania. A story in which resourceful children removed themselves from a difficult (and possibly dangerous) situation, took care of themselves (and Aunt Jandie’s goats) really appealed to me. Revisiting the novel 50 years later was fun.” Reviewing childhood favourites seems to be a shared activity, with both Louise and myself finding childhood books in our shelves. Louise rediscovered UHU by Annette Macarthur-Onslow, the story of a baby owl fallen from his nest.

“UHU is an often funny account of little Uhu’s exploits, habits and adventures. In 1969 Uhu became a picture book, a modern Uhu would be an internet sensation, a youtube star, as he interacts with glasses, windows, curtains and befriends a monkey . . . But it is all tinged with sadness, as Uhu breaks his leg twice, and their hopes of rehabilitating Uhu to the wild are dashed.”

I found my very battered and coverless copy of Halfway Across the Galaxy and Turn Left by Robin Klein in the back of one of my bookshelves. The story of a family of aliens who relocate to Earth has been a favourite since I was a child, but I was interested to see how well constructed and deep the story was through adult eyes.

“At its core, Halfway Across the Galaxy and Turn Left is about a family of very different people finding out who they really are. Zyrgon, their home planet, is described as claustrophobic and corrupt, with very proscribed roles for everyone. On Earth, the family discover new talents or utilise existing ones, but they have the space to learn more about themselves without someone peering in to have a look – pretty deep for a kids book.” Jo reviewed Maralinga by Christobel Mattingley and the Yalata and Oak Valley Communities which looks at the abuses of traditional indigenous land through overuse of resources and later through mismanaged testing of nuclear weapons. Despite the historical damages, though, Jo talks about how the book ends on a note of hope.

“This is a book which all Australians should read. What happened at Maralinga is among the worst wrongs the government and White Australia committed against the Aboriginal and Torres Strait Islander peoples, and it is a story too easily overlooked. It also serves as a reminder of the other wrongs committed. And the hope voiced at the end of the book is hope for us all.”

Some of the other reviews since the beginning of the year include: As always, I encourage reviewers to add some children’s books to their Australian Women Writers challenge. There’s some fabulous children’s books, with an incredible level of depth out there – whether you revisit a childhood favourite or discover some of the wonderful new books being published at the moment.