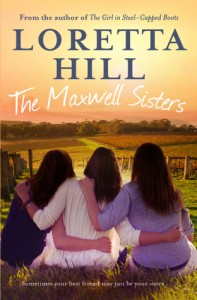 The Maxwell Sisters by Loretta Hill

“All families have their problems. None more so than the mad Maxwells of Tawny Brooks Winery. Situated in the heart of the Margaret wine region, this world-renowned winery was the childhood home to three sisters, Natasha, Eve, and Phoebe. Now all three girls are enmeshed in their city lives and are eager to forget their past, until Phoebe decides to get married at home. . . This novel follows three extraordinary women’s journey to find love. It is a complex story, full of warmth, humor, and family. It’s about recognizing that sometimes your best friend may also be your sister.”

“Warm, reassuring and refreshing, The Maxwell Sisters is my favourite of Hill’s books. There’s a maturity about it that shows her continued growth as a writer,” writes Monique of WriteNoteReviews. Bree of 1Girl2ManyBooks says, “Loretta Hill writes amazing relationships. Not just romantic ones but family and friendship ones as well. There are some intricate and complicated relationships in this book and she handles them all with brilliance. ”  Rochelle of Inside My Worlds gives it an enthusiastic recommendation, ” The Maxwell Sisters is a great Australian novel with strong heroines and handsome (cheeky) hero’s that will capture you and leave you full of all the good feelings when you close the pages.”

It Started with a Kiss by Lisa Heidke

“It Started with a Kiss is about shattered hearts, secrets and the lies that tie estranged couple, Friday and Liam and their teenage daughters, Evie and Olivia together.
Naturopath, Friday Jones, feels betrayed when Liam, her husband of almost twenty years, announces that their marriage is over. On the brink of a mid-life crisis and crippled with a fear of missing out, Liam moves in with his bachelor brother, Brad, and pursues his ambition of becoming a stand-up comedian. Months later, Friday, still heartbroken, meets a charismatic, married man, but unable to control her desire, embarks on an intense secret affair. When Rosie, (Friday’s well-meaning best friend who runs a divorce party business) discovers that Friday is flirting with a danger that can only lead to further heartbreak, she convinces Friday to end the relationship and, much to Friday’s horror, signs her up with KissMeCupid.com. Reluctantly, Friday dives into the murky, unknown, online dating world. She soon starts receiving anonymous letters and gifts and quickly realises that one of her flings has taken obsession to the next level…”

Shelleyrae @ Book’d Out wrote Lisa Heidke’s fifth novel, It Started With a Kiss was ” told with plenty of humour and wit but doesn’t dismiss the seriousness of heartbreak and loss. I especially liked the realistic ending, which isn’t as neat as you might expect.” Michelle of BeautyandLace loves that Heidke’s “heroines are generally everyday average women, mid to late thirties and facing the same dilemmas that any one of us could face.”

“Sullivan Moss is useless.
Once a charming underachiever, he’s now such a loser that he can’t even commit suicide properly. Waking up in hospital after falling the wrong way on a rooftop, he comes to a decision. He shouldn’t waste perfectly good organs just because they’re attached to his head. After a life of regrets, Sully wants to do one useful thing: he wants to donate a kidney to a stranger. As he scrambles over the hurdles to become a donor, Sully almost accidentally forges a new life for himself. Sober and employed, he makes new friends, not least radio producer Natalie and her son Louis, and begins to patch things up with old ones, like his ex-best mate Tim. Suddenly, everyone wants a piece of him. But altruism is not as easy as it seems. Just when he thinks he’s got himself together, Sully discovers that he’s most at risk of falling apart.“

“A story about finding meaning and purpose in life, about changing the things you can, and accepting those you can’t, Useful is an entertaining read from Australian playwright, author and television scriptwriter (most notably for Offspring), Debra Oswald,” summarises Shelleyrae @ Book’d Out. Carolyn says, “The plot moves along well with several story lines interwoven to keep the action going with a good mix of drama and humour [and] plenty of interesting characters”