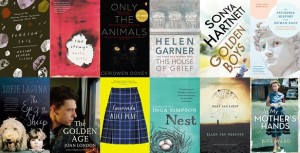 The Stella Prize longlist has been announced. Below is a list of the longlisted books, along with links to reviews submitted for the AWW Challenge.

How well did we do?

As you can see, most of the books received at least one review, with several attracting multiple reviews. If numbers count, Helen Garner’s This House of Grief is a clear favourite with nine reviews, followed by Sonya Hartnett’s Golden Boys, Joan London’s The Golden Age and Inga Simpson’s Nest with five reviews each.

The only book not reviewed for the challenge is Christine Kenneally’s The Invisible History of the Human Race.

If you have reviewed one of these books and your review isn’t listed above, please leave a link to your review in the comments below.

Further information about the longlist can be found on The Stella Prize website here.

Now for the big question: how many of the longlisted books have you read?