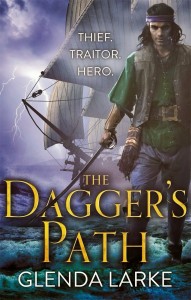 After a bumper month in January, February has been almost as strong on the reviewing front. The most reviewed book in the past month was Avery by Charlotte McConaghy, who drew for most reviewed author with Gillian Polack, who had three different books reviewed this month. Fantasy was very much the most popular speculative genre this month. Starting from the BFF (big fat fantasy) end of the scale, we had Dagger’s Path by Glenda Larke reviewed by Helen Venn. This is the second book in The Forsaken Lands trilogy and Helen writes:

I found this book engrossing. It is full of cleverly detailed world building making it truly believable. The conflict between trading and colonising nations that see themselves as entitled to take what they want and the people they seek to exploit is one that we are all familiar with and this is one of the themes of this book.

On the paranormal romance front, Dani Kristoff’s Bespelled was reviewed by Sam Still Reading who writes:

Bespelled by Dani Kristoff is a ro-magic novel that was a great pick me up for my midweek slump. It’s funny, with super sexy parts, some high drama and a sweet ending. It packs a lot into the story besides the romance too, such as family secrets being revealed for both hero and heroine. Our most popular book this past month was Avery by Charlotte McConaghy, reviewed by Shelleyrae, Shaheen and Stephanie Gunn. Stephanie writes:

As an adult, and especially as one who has read a lot of fantasy (aimed both at YA and adult audiences), I was initially wary of many of the tropes McConaghy uses in the book.  The bonding between lovers veers very close to love at first sight, and the fact that Kayans have colour changing eyes seemed yet another recycling of old tropes. However, as I read on, I found that McConaghy was pushing past many of these tropes.

On the magical realism front, we had two reviews of different books in the past month. There was Cats, Scarves and Liars by Kathryn White, a fusion of magical realism and mystery about an Australia Post worker whose cat starts talking to her amid unexpected disappearances. It was reviewed by Brenda. There was also Ms Cellophane by Gillian Polack, about an older woman whose life becomes a bit stranger than expected after she I read this novel when it was first released as ‘Life through Cellophane’ in 2009. I reread it after it was reissued in digital form, and found that I enjoyed it even more. The first time around I focussed on the hectic drama of Liz’s life, a blend of inward-focussed musing and curious external events. This time around I looked more at the journey Liz was taking, at how she was looking for a meaning not defined by relationship and employment status. Or ants. Who might Liz become?

Participants also reviewed a reasonable number of volumes of short stories. For example the fairytale-influenced anthology Phantazein edited by Tehani Wessely. The authors of the stories contained within are all female and about half of them are Australian. In her review, Lisa writes:

Phantazein editor Tehani Wessely, says in her introduction ‘the stories in these pages are inspired by mythology, by fairy tales, and by the tradition of fantasy itself’ – and she was spot on. The stories are beautifully told with richly woven worlds and characters I want to know more about. In fact, I would love to read extended versions or novellas of many of the stories.

Also edited by Tehani Wessely, this time with Tansy Rayner Roberts, was Cranky Ladies of History, an anthology filled with stories of historical women some with mythical elements. We had reviewed submitted by Shelleyrae and Sean. Shelleyrae writes:

Each short story in Cranky Ladies of History features a real female historical figure. I’m not familiar enough with history to separate fact from fiction in these pieces but these strong, often fierce women are those who challenged society’s rules and ideas about how women should behave, though not always in heroic or noble ways.

Also on the historical fantasy front but in novel form was Illuminations by Gillian Polack and reviewed by Elizabeth Fitzgerald. Elizabeth writes:

This is a Russian doll kind of story, beginning with the discovery of Rose’s letters home, then moving back and forward between Rose’s first-person account of her sabbatical and her third-person translation of Ailinn & Guenloie’s quest. Despite this, the two main stories don’t share obvious parallels so much as undercurrents the reader needs to dive for. There were a couple of science fiction novels reviewed in February: Langue[dot]doc 1305 by Gillian Polack, about a group of mostly scientists time travelling to 1305 France. Jennifer Cameron-Smith writes in her review:

Dr Artemisia Wormwood is the historian. She’s a late inclusion to the team, and she’s and expert in Anglo-Norman and Norman hagiography, rather than medieval history. Still, Artemisia is willing to go for personal reasons.
So, what could possibly go wrong?
Well, the only thing that the scientists seem able to agree on is that their own work is important and should be given precedence. The importance of history hardly seems worth considering. And as for keeping away from the people in the local town – why should they?

There was also The Wonders by Paddy O’Reilly, reviewed by Mel. She writes:

This was a really interesting book, looking at the ways technology might be used in the most extreme medical and cosmetic circumstances. Leon’s mechanical heart keeps him alive, but makes him an object of curiosity and in some ways, makes him exceedingly fragile. As he travels across the world, to join the exhibition and touring with it, he is confronted with the strange and wonderful as well as the most grotesque parts of life. And finally, there was one horror book reviewed, although it probably sits closer to dark fantasy. Cherry Crow Children by Deborah Kalin is the twelfth volume in the Twelve Planets series of short story collections all written by Australian women. In my review, I write:

What links [the stories] clearly is the recurring idea of exclusion and of differences being consumed by a place or an idea or the ideal of a place. The writing in all of them is beautiful without weighing the story down with dense prose.