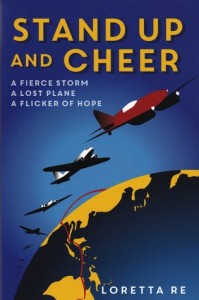 There weren’t a lot of reviews for c

hildren’s books over the past two months, but I wanted to bring special attention to a review from Brona’s Books of Loretta Re’s Stand Up and Cheer. This book is based on real life events in Albury, NSW in 1934 when a plane made an unexpected landing during a round the world race. The review highlights some of the difficulties the author had in getting the book published, which is always interesting. It also highly recommends the book – especially for lovers of air history.

“A truly great book, with a message worth saying, will transcend its setting. Stand Up and Cheer does this by emboding the universal themes of courage (physical & moral), friendship & innovation.”

While there weren’t many reviews to round up this month, we’re well and truly into award season. The shortlist for the Children’s Book Council of Australia’s Book of the Year Awards were released yesterday with lots of Australian women writers included.

The Reading’s Children’s Book Prize shortlist was also released recently. This award aims to highlight authors who are newer to junior and middle fiction. Among the shortlistees were:

There’s so many fabulous books on the short lists – I thoroughly recommend getting in a trying to read and review them all! You’ve got a couple of months to read them before the awards are announced – I really look forward to reading all your reviews!