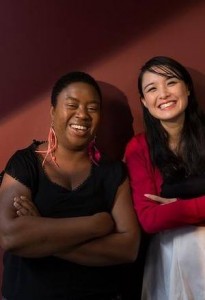 Over April we’ve been hosting a focus on Australian Women Writers of Ethnic Heritage and we’ve published wonderful posts by Queenie Chan and Marisa Wikramanayake. Today we’re delighted to add a guest post by Maxine Beneba Clarke. Maxine is an Australian writer and slam poetry champion of Afro-Caribbean descent. She’s the author of the poetry collections Gil Scott Heron is on Parole and Nothing Here Needs Fixing and her debut short story collection, Foreign Soil, won the 2013 Victorian Premier’s Award for an Unpublished Manuscript. It was published by Hachette in 2014, won the Indie Book award for Debut fiction, and has been shortlisted for the Stella Prize, ABIA awards, NSW Premier’s Awards, and longlisted for the Dobbie Prize. In her post, Maxine discusses the importance of hearing the voices of Australian women of colour, which form a ‘new and exciting and exuberant chorus.’

On Australian Sister-Writers of Colour

The first conversation I had with Mullumbimby author Melissa Lucashenko was in late 2013, in the bathroom of a fancy restaurant in Melbourne. We were there as guests of RMIT and The Copyright Agency, to celebrate the launch of an international fellowship program of which we were both part. Between main and dessert, I walked into the bathroom, just as Melissa was walking out. “It’s so nice to meet you,” she said. “When I read your name as the other person who’d got a fellowship, I thought you’d be a whitefella.” We laughed our heads off. The conversation meant no disrespect to the rest of the contingent who would be on the residency with us. It was merely a nod, of sorts: a recognition of the different guard-down layer of interaction between women writers of colour; an acknowledgment of the blinding, breaking fatigue that being the bearer of difference can bring in the Australian literary world.

I was nervous to meet Melissa. She was one of my all-time favourite writers. I wasn’t sure how I was going to get through a ten day residency without suddenly jumping up and licking her face like an over-excited puppy. Yet, with that one sentence, all of those fears dissolved. I know, she was saying, with that opening thought-you’d-be-a-whitefella greeting. I know. Melissa Lucashenko is a Brisbane Goorie woman; I am an Australian-born woman of Afro-Caribbean descent. But having her at the other end of table that evening made my very existence easier.

I first met Randa Abdel-Fattah in 2013. We were billed together with several other women at a Woman of Letters event in Melbourne’s Northcote. I’d been a huge fan of her young adult fiction (Does My Head Look Big in This; Where The Streets Had a Name) for years. Hearing her speak that afternoon, about her journey to Palestine with her ageing father – their pilgrimage to see his birthplace, felt like long bone fingers were inside my chest, squeezing out air. I introduced myself to Alice Pung by email. Having adored her incredible memoir Unpolished Gem, about growing up in a migrant family in Melbourne’s west, where I now live and write, I wrote to ask if she’d consider providing a cover-quote for my first fiction book. A few weeks later, when I opened my email account, I could not believe what she’d written. I will not forget these characters easily, she said…this is going to be an important book…each story is a stand-alone masterpiece… A year on, Alice and I are firm friends and writing-sisters. Back then, after receiving feedback from such an incredible wordsmith, I cried on and off for almost an hour. There are many other sister-moments I remember clearly – sharing the Northcote Social Club stage with Indigenous writer Ali Cobby Eckermann for Overload Poetry Festival’s All Stars event back in 2009 – tears streaming down my face as she read from her incredible collection Little Bit Long Time. Watching the 2009 Australian Poetry slam from the audience, and seeing (for the first time), another Australian women of African descent, Tariro Mavondo, storm the slam stage. The moment Ellen van Neerven asked me to launch her first book Heat & Light, in Melbourne – how honoured, and choked up, and overwhelmed I felt. Earlier this year, sharing the stage with Ellen and Anita Heiss at The Wheeler Centre’s 5th Birthday Gala Storytelling event, finally ambushing Anita to sign my dog-eared copy of Am I Black Enough For You?

We are of different backgrounds, have different stories. Indeed, I would argue that many of the challenges Indigenous women writers face, in making their voices heard in their own land are different and distinct from those faced by migrant writers of colour. We do not agree on all things: there is no homogenous Australian Woman Writer of Colour. Yet it feels there is an inescapable, almost indescribable connection. These friendships and writerly interactions fortify me – they sit inside my memory: a soothing balm, when cracks start to show. They are my where-were-you-when writing moments, the ones I cling to when the going gets tough, to remind me there are others walking next to me; that slowly things are changing; that I am part of a new and exciting and exuberant chorus: a single voice in a sometimes jubilant, sometimes melancholic, harmony that has waited for so long to be heard.