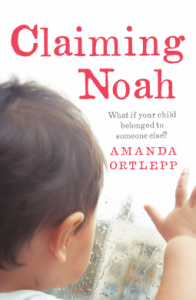 “Catriona and James are desperate for children, and embark on an IVF program. After a gruelling round of treatments, Catriona finally falls pregnant, and they donate their remaining embryo anonymously. Diana and Liam are on a waiting list to receive an embryo. Sooner than expected, they are thrilled to discover one is available. After a difficult pregnancy, Catriona gives birth to Sebastian. But severe postnatal depression affects her badly, and quickly turns into deadly psychosis. For her protection and her baby’s, she’s admitted into psychiatric care. When she comes home, she again struggles to bond with her baby, but gradually life finds its own rhythm. Meanwhile, Diana has given birth to a beautiful little boy, Noah.
But when he is two months old Noah is abducted … and Diana and Liam’s nightmare begins. Where is Noah? This gripping, emotional thriller binds together the stories of Catriona and Diana and will leave you on the edge of your seat.  What if your child belonged to someone else?“

“I enjoyed this book – I did find some parts of the story a bit far-fetched and the explanations in the latter part a bit offhand but I definitely enjoyed the thought processes I went through whilst reading it.”; reports Bree of All The Books I Can Read. “…it’s a credit to Ortlepp that she is able to bring her characters to life so well that I began think I knew them!”;  writes Elizabeth of Devoted Eclectic. In summary, Shelleyrae @ Book’d Out suggests; “A story about motherhood, loss, betrayal and love, Claiming Noah is an emotionally charged novel.”

His Other House by Sarah Armstrong

“He was dismayed how readily he took to lying. He’d always thought of it as a decisive abandonment of the truth. Instead, he realised, it was simply a matter of one word slipping into the place of another.’ Dr Quinn Davidson and his wife Marianna have endured years of unsuccessful IVF and several miscarriages, and Quinn can’t face another painful attempt to conceive. Marianna is desperate to be a mother and their marriage is feeling the strain. At a small-town practice a few hours from their home, Quinn meets Rachel, the daughter of one of his patients. Drawn to each other, it’s not long before they find themselves in a passionate affair and Quinn realises he must choose between the two women. Then Marianna announces a surprise natural conception, news that will change the course of all their lives. Set in the lush Australian subtropics, this taut emotional drama poses questions about moral courage and accountability, and asks whether love means always telling the truth.”

Cassie Hamer @ Book Birdy writes; “Armstrong provides close and intimate access to the interior lives of her main characters. We understand how they think and feel. While we may disagree with the decisions they make, we are never in doubt as to the thought (or lack thereof) that went into them.”  Lisa Walker praises;  “Sarah’s writing [as] evocative and striking.”

The Secrets of Midwives by Sally Hepworth

“The Secrets of Midwives tells the story of three generations of women devoted to delivering new life into the world—and the secrets they keep that threaten to change their own lives forever. Neva Bradley, a third-generation midwife, is determined to keep the details surrounding her own pregnancy—including the identity of the baby’s father— hidden from her family and co-workers for as long as possible. Her mother, Grace, finds it impossible to let this secret rest. For Floss, Neva’s grandmother and a retired midwife, Neva’s situation thrusts her back 60 years in time to a secret that eerily mirrors her granddaughter’s—a secret which, if revealed, will have life-changing consequences for them all. Will these women reveal their secrets and deal with the inevitable consequences? Or are some secrets best kept hidden?”

“Each woman’s story and journey was engaging and wonderful.”; enthuses Kathryn at The Book Date. “I did find some parts a little far fetched..”; writes Bree of All the Books I Can Read, “I really enjoyed the story though and the ideas of the three midwives of the different generations and how their careers were shaped by their personalities as well.”

“Jesse Marley calls herself a realist; she’s all about the here and now. But in the month before Charles and Diana’s wedding in 1981 all her certainties are blown aside by events she cannot control. First she finds out she’s adopted. Then she’s run down by a motor bike. In a London hospital, unable to speak, she must use her left hand to write. But Jesse’s right-handed. And as if her fingers have a will of their own, she begins to draw places she’s never been, people from another time—a castle, a man in armor. And a woman’s face. Rory Brandon, Jesse’s neurologist, is intrigued. Maybe his patient’s head trauma has brought out latent abilities. But wait. He knows the castle. He’s been there. So begins an extraordinary journey across borders and beyond time, a chase that takes Jesse to Hundredfield, a Scottish stronghold built a thousand years ago by a brutal Norman warlord. What’s more, Jesse Marley holds the key to the castle’s secret and its sacred history. And Hundredfield, with its grim Keep, will help Jesse find her true lineage. But what does the legend of the Lady of the Forest have to do with her? That’s the question at the heart of Wild Wood. There are no accidents. There is only fate.”

Carolyn believes, ” The two interwoven stories were told in different narrative styles which made it easy to follow the changes between the two threads and switching between the two parallel stories also helped to maintain the tension in each story.”. Veronica Joy has this to say; “Some readers may work out the twists and family secrets but I’m never good at that so I had no clue to the final revelations. Well I though I had a clue but I was completely wrong!”. “Wild Wood is a compelling read, despite my reservations. Graeme-Evan’s symbolic use of an ancient legend at the heart of the narrative is artful, her descriptions of the castle’s ancient artefacts tactile and considering the novel’s themes, with present day hindsight, the novel’s setting in the lead up to Charles and Diana’s wedding is eerie.”; opines Elizabeth Jane Corbett.

“Sassy foodie Becca Stone is over her job taking reservations in one of London’s most successful restaurant empires. So when she is unexpectedly catapulted into working as PA to celebrity chef, Damien Malone, it seems like the opportunity of a lifetime. Becca is quickly caught up in an exciting whirlwind of travel, reality TV and opening nights, and even her usually abysmal love life takes a turn for the better. But as Becca is slowly consumed by the chaos of life in the spotlight, she begins to lose touch with her friends, her heart and even with reality. Working with Damien has its challenges and she is soon struggling with his increasingly outrageous demands and sleazy advances, all while managing the ridiculous requests of his self-centered wife. It takes a disastrous trip to Italy for Becca to realize that she may have thrown away exactly what she’s been looking for all along. Inspired by real-life adventures, this deliciously funny and romantic story reveals a tantalizing glimpse of the trendy restaurant scene: a world where chefs are treated like rock stars, and cooking isn’t all that goes on in the kitchen.”

“Lisa Joy taps into the contemporary issues of work-life balance and uses the foodie scene as a fun and relevant backdrop. Yes Chef! will especially appeal to Gen Y and Z readers … and if they have an interest in the food scene, even better.” ; suggests Monique of Write Note Reviews. The Subversive Reader didn’t enjoy the story overall however she writes; “There were moments of really good writing within the books – chapters and scenes which were interesting and thoughtful.” Sam Still Reading agreed the novel has its flaws but in summary wrote; ” It’s a book I found engaging, warm and witty.”

My name is Shelleyrae Cusbert I am a mother of four children, aged 8 to 18, living in the mid north coast of NSW. I am an obsessive reader and publish my thoughts about what I read at my book blog,  Book’d Out.  In 2012 I read and reviewed a total of 109 books for the AWW Challenge and in 2013 a total of 117 and 2014 a total of 102. I juggle caring for my family with a part time job and volunteer at both the town’s local library and the children’s school library.