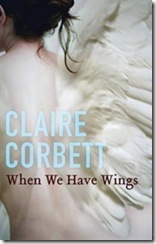 It’s been a shorter gap since my last post so we don’t have quite as many reviews this time around. On the science fiction front, we had two books reviewed. When We Have Wings by Claire Corbett was reviewed by Janine Rizzetti, who doesn’t usually read spec fic, but gave this one a go. She enjoyed it but thought, at 480 pages, that it was a bit on the long side. (Probably best to stay away from Big Fat Fantasy books then.)

Another near-future book, The Ark by Annabel Smith, was reviewed by Melinda Tognini. She mentions this in her review:

Although The Ark is not a young adult novel per se, I see potential for introducing this text into classrooms as a launch pad into issues and skills such as sustainability, communication, human behaviour, characterisation, inferred meaning, archival research and source analysis. Students can then explore the app, adding their own fan fiction, newspaper articles and blog posts, meaning that something that might ordinarily be done as a class assignment can have a different, more purposeful outcome. Some food for thought there.

Horror was a bit of an odd one this month. There were a couple of magazines with some horror elements but not in all of the stories. For example, Sean the Bookonaut reviewed the Review of Australian Fiction Volume 13 Issue 6, which contained a horror story written by Kaaron Warren and a not-horror story written by Michelle Goldsmith. Sean writes:

The Warren leaves me feeling delightfully chilled. The Goldsmith, while a kinder tale, leaves me with a sense of sad longing. Fantasy, as always, had the biggest turnout. Stephanie Gunn reviewed Liesmith by Alis Franklin. She particularly liked the romance:

Avery by Charlotte McConaghy was quite popular last month and got another review this month. Rochelle Sharpe writes:

Avery is a story of love, hope, redemption. It packed an emotional punch with well rounded characters that leapt of the page. I was quick to fall into it and was held captivated until the last page. It was full of clever and shocking twists that will leave you breathless. Avery is the first book in the Chronicles of Kaya series and I cannot wait to get my hands on the next book (which I’m told is available as an ebook next month)For those who love a darker fantasy filled with romance, I highly recommend it. Another sort-of urban fantasy that got a couple of reviewed was Graced by Amanda Pillar.  I and Elizabeth Fitzgerald reviewed it. Elizabeth writes:

I’m not a huge fan of love triangles and I was half expecting Graced to feature one, based on the cover and the blurb. Instead, I discovered a paranormal romance with intelligence, making it easily one of the best I’ve read in the sub-genre.

I didn’t actually think the romantic elements were that prominent, which also suited me. A versatile book, perhaps.

And finally, more short stories. Lynxie of Coffee2words reviewed Aurealis #76, which contained one story about swashbuckling female pirates by Meryl Stenhouse and one very Australian story by Melanie Rees. Click through to her review for slightly longer descriptions of each.
And that’s it for this month’s round-up. One quick shameless plug before I go: I and Holly Kench, who is involved in maintaining this website, are editing an anthology of post/apocalyptic fiction featuring disabled and chronically ill characters. You can read more about it here. And if you’re reading this after 9 pm on 1/4 AEDT, then you can even pre-order a copy through our Pozible campaign.