Q&A with Allison Tait: Author of The Mapmaker Chronicles Series for Children 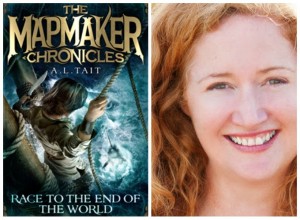 Allison Tait is a multi-genre writer who has more than 20 years’ experience in magazines, newspapers and online publishing. Her children’s novel The Mapmaker Chronicles: Race to the End of the World was published by Hachette Australia in October 2014. The sequel, Prisoner of the Black Hawk, has just been released. Did you grow up in a bookish house? What was your early relationship with books?
My Mum and Dad are both readers – in fact, my Mum still has the biggest book collection of anyone I’ve ever met – so yes, we were always surrounded by books. I was one of those voracious readers who read my way through the local library, plus the back of cereal boxes and anything else that was put in my way.

When did you begin writing in a serious way, and what motivated that?
I’ve worked in magazines since I was about 18, first as an editorial assistant, then as a cadet and a sub-editor before moving into features writing and editing. For a long time, feature writing kept me satisfied. I always felt that books were something that were written by other, smarter, people and read by me.   But in my mid-twenties, I began writing romance novels. I’d read a lot of them in my teens and I felt that, with my understanding of women’s magazines and markets, they were something I could do. As it turned out, romance writing is a lot harder than it looks, but the fact that I completed a few manuscripts proved to me that I could do it. I could write a book. And so I turned to writing other things – mostly contemporary women’s fiction, which I am still working on. What was the inspiration behind The Mapmaker Chronicles trilogy?
The Mapmaker Chronicles came from two conversations I had with my oldest son, now aged 11. The first took place out in our backyard, under a dark, velvety sky strewn with stars. I’d taken him out there to star gaze and was feeling very Mother Of The Year, when he turned to me and asked, ‘Mum, how far does space go?’ He’s very good at head-hurting questions. When I explained that nobody knew, that every time they went out there they just found more space, he looked at me sceptically, totally ruining my levels of Parental Satisfaction.
The following night we were reading a Horrible Histories novel together and he turned to me (again with the head-hurting) and asked me how they’d mapped the world. “Well,” I said. “They had to go. They had it get in their ships and go out there to see what they might find.” I paused and then, struck by a brilliant moment of Mum Inspiration, I added: “They would have felt exactly the same way we feel when we look out into the night sky.”
And in that moment, I could see a race to map the world – and a boy who really didn’t want to go.

How did the first book in the trilogy, Race to the End of the World, come to be written and published?
Well, after that brilliant moment of inspiration, I did precisely nothing about my idea. I was working on another book and, frankly, I’d never written for children before and wasn’t sure where to start. And then one day I was talking with my agent and she asked what I was going to do next. I ummed and aaahed a bit, throwing out a non-fiction project I had in mind. And then she asked me if I had ‘any ideas for kids’ because she was being asked by publishers for manuscripts. “Well,” I said. “I’ve got this random idea about mapmakers.”

I wrote the first book very quickly after that conversation because my agent wanted a synopsis and I had no idea what the book was about beyond ‘race to map the world’. I wrote the first draft during NaNoWriMo (it actually took me five weeks, so I didn’t even ‘win’) and then I read it to my oldest son, who critiqued it thoroughly and told me where all the ‘boring bits’ were. I then sat down and redrafted it (reading aloud really shows you where the problems are), removed the boring bits and sent it to my agent. It took another six months and a series outline before Suzanne O’Sullivan, my publisher at Hachette Australia, enthusiastically bought the book. What was your experience of writing the second book in the series, Prisoner of the Black Hawk?
Prisoner of the Black Hawk was a challenge, mostly because I had never written a series before. The most difficult aspect for me was handling the backstory – not just for the characters, but things that had happened in the previous book. How much did I need to repeat for readers to know where they were? It took me a few drafts to get it right.

I think the middle of any story is always the most difficult bit to write, and in this instance I am dealing with stories within each book, as well as the over-arching narrative for the trilogy. It has been a very interesting process for me and I’ve learnt SO much from it.

What are your writing habits?
I am writing all the time, but not always on just one project. At present, I am redrafting (third time) a novel for adults, as well as editing book three of The Mapmaker Chronicles. I also teach freelance writing online for the Australian Writers’ Centre, do social media work for several clients, and, of course, continue to write articles and do corporate work as a freelance writer.

When I’m drafting a new novel, I work on it every day because I can’t wait to find out what happens next. I tend to get a first draft down quickly, and then I go back and take a long hard look at it (note, some novels take more looking at than others when you work this way…).

What do you do when you feel creatively stuck?
See above. I simply work on something else. I find that switching between projects allows me to continue moving forward. And if that doesn’t work, I go for a walk, or weed the garden. I like active meditation – mindless physical tasks that allow me to shove the problem to the back of my brain. It’s amazing what your mind can come up with when you leave it to its own devices.

What are you working on now?
I’m working on the edits for book three, and I’m also outlining some more books in The Mapmaker Chronicles series, just in case. But I’ve also given myself a deadline of early May to get that adult novel redrafted. I do love a deadline.

What’s your favourite book by an Australian female author?
Hmmmm. This is a very tough question. When I’m asked by kids at school talks what my favourite novel was as a child, I always say Callie’s Castle by Ruth Park. It evoked in me a lifelong love of turrets. I also loved her Playing Beattie Bow, and Looking for Alibrandi by Melina Marchetta. Now that I’m a grown-up, maybe People of the Book by Geraldine Brooks, one of Kate Morton’s or, as possibly the most memorable ever, The Thorn Birds by Colleen McCullough. But, you know, I could create a VERY long list here.