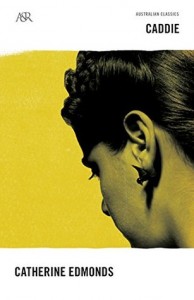 Our challenge reviewers rocked this month posting 46 reviews for Classics and Literary books. That’s a record for April, and one of the highest number posted ever in a month. I don’t know what you’ve all been drinking, but keep doing it. Australian literature, and our women writers in particular, will thank you!

April is a special month for another reason too: it’s the month the Stella Prize was announced. This year’s winner, as reported by Paula and Tsana, was Emily Bitto with her debut novel The Strays.

Our 46 reviews covered 28 authors, meaning that unlike last month, we had several authors who received several reviews. On the downside of all this excitement, we had only one Classic novel reviewed. Oh well, we can’t win them all!

The single classic reviewed in April was a new one for the challenge, Caddie: An autobiography of a Sydney barmaid, by Catherine Edmonds. It was reviewed by our top reviewer, Jennifer Cameron-Smith. Caddie was written with the encouragement of author Dymphna Cusack, and tells the story of Edmonds’ life from 1924 to 1941 when she worked as a barmaid and SP bookmaker in the “tough working-class pubs of Sydney”. Older readers here will probably know that the book was made into a movie starring Helen Morse in 1976. Cameron-Smith says this of the novel:

The underlying theme of the story is the stoicism and strength of a female ‘battler’. It’s difficult to know how much of this story is true and how much it has been embellished in the telling. Perhaps it doesn’t matter: we admire our archetypal heroes, and Caddie’s story enables her to fit that role.

I think she’s right. Some describe it as a novel, because of the fictionalisation, but in the end what matters is not how it is classified but that it captures the “truths” of Caddie’s life.

We are well into awards season now, so it’s not surprising that books which have won or been shortlisted for various awards are being reviewed. This month these include Emily Bitto’s The Strays, Maxine Beneba Clarke’s Foreign Soil, Sofie Laguna’s The Eye of the Sheep, Joan London’s The Golden Age, Christine Piper’s After Darkness, Inga Simpson’s Nest, and Ellen van Neerven’s Heat and Light. I featured Clarke, Piper and van Neerven in last month’s roundup, so will feature some of the others this month, starting of course with Ellen Bitto’s book.

The Strays is historical fiction about a fictional artists’ colony in 1930s Victoria. Jonathan Shaw (Me Fail? I Fly) thought the book was beautifully written but found it hard to engage with, feeling unsure about why it should matter. He recognised though that he is in the minority. Donna Lu, writing for the Newtown Review of Books, described it as “a deftly plotted, carefully crafted narrative about art, trauma and female friendship” while Kate (Books are my Favourite and Best) had, like Shaw, some niggles. She saw positives, such as the portrayal of mother-daughter relationships, but felt that “many of Bitto’s analogies and creative elements were trying too hard and as a result, bits and pieces stuck out rather than flowed”. Jennifer Cameron-Smith, like Lu, enjoyed the novel, loving in particular Bitto’s description of the Trentham world. It’s interesting when a book garners such varied opinions – and increases my desire to read it myself!

Angela Long reviewed Sofie Laguna’s The Eye of the Sheep on Welcome to my Library. This novel is set in the 1990s and is about a young autistic boy. Long writes that:

Laguna’s lyrical style sits well with the almost savant Jimmy, the sacrificial lamb of the family, and the book pulls you along to a climax that is inevitable but at the same time disturbing. Almost perfectly paced, there are moments when Jimmy’s enlightened voice becomes overwhelming, but this could be an emotion shared by his family. Above all Jimmy is resilient and never gives up.

Inga Simpson’s second novel Nest was reviewed by Marcia (Book Muster Down Under). It’s a book about a woman, a boy to whom she teaches drawing, and the impact on them of a girl going missing. Marcia describes it as “a story about real life – survival, hope, love, disappointment and complex relationships – and how we shuffle the cards that life has dealt us”. She enjoyed it, saying that “Inga’s beautiful prose with poetic nuances, draws you in to the world that she inhabits”.

Not all memoirs are classified as literary, but two books were labelled so in April, Patti Miller’s Ransacking Paris: A Year with Montaigne and Friends, and Biff Ward’s In My Mother’s Hands.

Jeanette Delamoir, reviewing for the Newtown Review of Books, teases out the complexities of Patti Miller’s Ransacking Paris. Miller was longlisted for the Stella Prize and won the NSW Premier’s Literary Award for History in 2013 for her previous work, The Mind of a Thief, which examines the dispossession of the Wiradjuri people in the region in which she had grown up. Ransacking Paris examines another part of her life, a year she spent in Paris over ten years ago. Delamoir analyses the book at some depth, exploring both the content and the way in which Miller has written it. The book clearly gave her much to think about but she concludes that

I realise my thoughts take the form of a conversation with the author – which makes me think that, in this memoir, Patti Miller has created a version of herself that is real for the reader – multi-dimensional, complex, a living being whose consciousness shimmers with life.

Jonathan Shaw (Me Fail? I Fly) and I (Whispering Gums) reviewed Biff Ward’s In My Mother’s Hands, which was longlisted for the Stella Prize this year. Biff Ward is the daughter of the late Russell Ward, one of Australia’s most respected historians of the mid to late 20th century. Both of us, coincidentally, read it with our book groups, and both of us were impressed by Ward’s ability to turn something that could easily have been a misery memoir – her mother was “delusional and self-harming”, as Shaw writes – into a warm, open and generous story of a very difficult family life. Shaw writes that:

It’s a book of deep compassion, not just for the mother, but also for the father who, far from faultless, struggles heroically to provide a stable life for his children, while protecting his wife as long as possible from the depredations of the psychiatric profession.

I commented too on Ward’s generosity and lack of anger, and admired

Ward’s honesty in confronting difficult truths, and her ability and willingness to reflect on her experiences and comprehend their meaning or implications.

Miller and Ward may not have won their respective Stella Prizes, but what books they are.