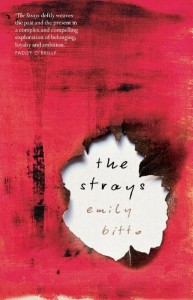 Well! What a big month this month with 26 reviews featuring 19 historical novels, including my own which was a nice surprise. The most reviewed book this month was The Strays by Emily Bitto with 4 reviews. This isn’t surprising as the novel won the Stella Award last month.

Donna at Newtown Review of Books explains: “It is clear that Bitto’s commune, termed the Melbourne Modern Art Group, is based on the real-life Heide Circle, which was established by John and Sunday Reed in the mid-1930s.” Jennifer at Goodreads found, “Many of the characters in this novel are complex, and the settings are beautifully described. While I found few of the characters likeable, they each seemed a perfect fit in the world Emily Bitto created for them: adults mostly oblivious to the need to take responsibility for children and children unaware of the consequences of their actions.”

A quite different book (by the sound of it) and one I hope to read soon is The Floating Garden by Emma Ashmere – “A wide-ranging historical novel about Sydney and its people in the 1920s: those who were displaced with the building of the harbour bridge, those unhappy and wealthy, and those attracted to spiritualism.” Marilyn at Me, You and Books feels,“The Floating Garden is a fine example how fiction can be useful in expanding our understanding of the past. It is also simply an engaging narrative.”

Skipping back a few centuries Karen Brooks’ The Brewer’s Tale is a woman’s quest for independence in Medieval England. “When Anneke Sheldrake is forced to find a way to support her family after her father is lost at sea, she turns to the business by which her mother’s family once prospered: brewing ale.” Sarah from Reading the Past says of The Brewer’s Tale, it “will be a treasure for readers who appreciate an accurately rendered medieval setting and characters who reflect the era. The time frame (the later years of Henry IV’s reign) isn’t one often showcased in historical fiction, especially from a tradeswoman’s perspective.”

Still in medieval times (I think) is Dreamer’s Pool (Blackthorn & Grim, #1) by Juliet Marillier. “In the filthy dungeons of the corrupt chieftain Mathuin, two prisoners lean on each other to keep hold of their humanity. When uncanny chance allows an escape, they travel north together.” Faith from Beyond the Dreamline writes “Dreamer’s Pool fits an interesting mix of genres, a historical fantasy mystery novel with a strong streak of romance. Some elements work much better than others.” Glaiza from Paper Wanderer says, “Marillier’s heroines tend to undergo grim experiences but they still forge ahead. Dreamer’s Pool is a dark fairytale-like retelling mixed with a simple mystery for readers to unravel.”

Set further back in the indeterminate past is Captive Prince by C.S. Pacat which garnered three reviews. Lynxie at Goodreads writes, “If you love Arthurian tales, historical accounts that involve deceit and battles for the thrones set in eras like the Tudors and even those before them, then this story is certainly right up your alley.”

The first book in the Convict Girls series is Behind the Sun by Deborah Challinor. “Irreverent and streetwise prostitute, Friday Woolfe, is in London′s notorious Newgate gaol, awaiting transportation. There, she meets three other girls: intelligent and opportunistic thief, Sarah Morgan, naive young Rachel Winter, and reliable and capable seamstress, Harriet Clarke.” Brenda from Goodreads writes enthusiastically, “Beautifully written, the characters are incredibly real – the bond between the four girls was deep and everlasting. Behind the Sun is an amazing tale of historical fiction which I have no hesitation in recommending highly.”

Brenda on Goodreads (our top reviewer) has been busy this month with 5 reviews. Still in the convict era, Never to Return by 95 year old author Marjorie Mcardell Davey is a young adult novel inspired the story of 7,000 boys, mostly teenagers, who passed through this children’s prison across the bay from Port Arthur. Brenda writes, “I thoroughly enjoyed Fred’s story – his character is excellent, his speech (of the slums of old England) as I would imagine the kids of the time would speak. The harshness of Tasmania, the bleakness of the countryside and the freezing conditions the boys endured – all were extremely realistic.”

For a change in location we have A Time to Remember by Anna Jacobs. “1945 – the war in Europe is over. Most women can’t wait for their men to return, but in the small town of Rivenshaw in Lancashire, Judith Crossley fears having her husband back in the house. He’d grown into a bully and a drunkard, and on the occasions he’d come home from leave, he’d hit her.” Monique at Write Note Reviews says it “is another Jacobs’ book that will appeal to mainstream readers. It’s a character-driven tale with a particular emphasis on the female experience. I enjoyed the description of wartime and post-war life in the UK, particularly in the way women’s roles were depicted.” We definitely need more books expanding on this theme.

Back to the First World War with Gallipoli Street by Mary-Anne O’Connor, Bree at 1 Girl (also a very busy reviewer with three reviews this month) writes, “Gallipoli Street is a sweeping family saga encompassing several generations of three intertwined and closeknit families throughout the Great War, the traumatic aftermath, the Great Depression and into the conflict of World War II….I really enjoyed this beautiful, sweeping story that takes place during a time of such heartbreak and turmoil.”

The Tailor’s Girl by Fiona McIntosh is set in 1919 and the aftermath of WWI. “A humble soldier, known only as ‘Jones’, wakes in hospital with no recollection of his past. The few fleeting fragments of memory he glimpses are horrifying moments from the battlefield at Ypres. His very identity becomes a puzzle he must solve.” Kira Jessup thought “The characters in this book were so fantastic, I think I fell in love with most of them, with the exception of one. My heart broke many, many times and I couldn’t put The Tailor’s Girl down until the end.”

Lots to choose from here covering a timespan of 1,000 years or more. Ancient and Medieval times, the convict era, both World Wars. Take your pick! Where will you go next? I’m looking forward to finding out.