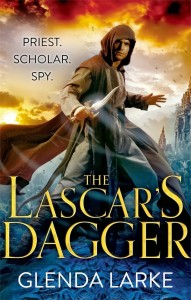 We had a pretty good haul of reviews over the past month. There wasn’t really any straight horror, but at least there was a healthy dose of science fiction for some genre variety.

I should also mention that during the month of April both the Ditmar and Aurealis Awards were announced. You can read the results of the Ditmar Awards at this link, and the Aurealis Awards here. I’ll leave you to peruse the full list, but suffice to say our AWWs did quite well.

Quite a few BFF (big fat fantasy) books were reviewed this month. Starting with our award winners, there was The Lascar’s Dagger by Glenda Larke, which co-won the Ditmar award for best novel. Mark Webb reviewed it, writing:

The plot is solid, with some good old fashioned conspiracies and hijinks. There is a great sense of fun in many of the segments, and the interplay between cultures is highlighted in interesting ways.

The Aurealis Best Fantasy Novel winner, The Dreamer’s Pool by Juliet Marillier, garnered a couple of reviews from Glaiza and Faith.

Dreamer’s Pool fits an interesting mix of genres, a historical fantasy mystery novel with a strong streak of romance. … Marillier has written many historical novels and is comfortable with this world. The unlikely detectives are strong protagonists – not particularly young, attractive or charming, and each slowly recovering from the brutalities of the past, but determined to seek justice in their own ways.

Still on the BFF front, there was The Dagger of Dresnia by Satima Flavell, which was reviewed by Elizabeth Fitzgerald. Elizabeth writes:

The Dagger of Dresnia moves away from typical fantasy novel in its protagonist. Although the story is told from a couple of different points of view, the main focus is on Queen Ellyria. I know of few fantasy stories where the main character is a middle-aged woman. Another fantasy book we had reviewed was The Hunt for Valamon by DK Mok, which Stephanie Gunn penned a review of. She writes:

The female characters in this book are incredible.  There are women in positions of power – Elhan is an accomplished warrior, despite being cursed to bring death and destruction everywhere she goes, and rightly feared because of it.  We also have Qara, childhood friend of the princes who has grown up to become a royal adviser, and Haska, who had a hand in Valamon’s kidnapping.  The reader sees chapters from all of their points of view, allowing Mok to flesh out all of the characters fully.  There are no cackling two-dimensional villains here, just real people, all of whom believe that their actions are right. The most popular spec-fic book this month was Captive Prince by CS Pacat. It gathered three reviews from Glaiza, Bree and Lynxie. Bree writes:

This book sucked me in from the very first page, where the Veretian Ambassador to Akielos is being shown the ‘gift’ that the new King is giving to Vere’s heir apparent. Damen is a warrior, he has been trained to fight and defend but he has also been utterly blindsided by treachery, drugged and had his power and authority stripped from him.

I loved the ancient history underpinning the story,- it is richly, sensuously detailed and even woven through with fantasy,

the world created is very easy to believe. The fantastical elements feel as if they could be true, and certainly, at a symbolic level they contain universal and eternal truths.

Moving onto something a bit different, we have Hindsight by Melanie Casey. Reviewed by Marcia, this is a paranormal crime book rather than a BFF. Marcia writes:

If you’re looking for a crime thriller with a gutsy heroine, a tortured hero, grit, intensity, a hint of more to come and just a sprinkling of a believable extra-sensory gift, then I wouldn’t hesitate to recommend this novel which is a promising start to a great new series.

As I said in the introduction, we had a good haul of science fiction this month and quite a broad one too. I’m going to go through alphabetically rather than trying to group them together.

First up we have Aurora: Darwin by Amanda Bridgeman, the start of a military SF series. It was reviewed by Elizabeth Fitzgerald, who writes:

There is a diverse mix of races and nationalities among the other crew members but I found the characterisation to be a bit shallow. Class differences came a little more into play, but the focus was very much on binary gender differences in a heterosexual context. This focus was somewhat integral to the plot but I hope to see more genuine diversity later in the series.

Next up we have When We Have Wings by Claire Corbett, a near-future tale in which medical advances allow people to have functional wings grafted onto their backs.

It was reviewed by Glaiza, who writes:

The sheer immersive beauty and verisimilitude of the the flight scenes were a breathtaking addition to an intriguing speculative world. There is a dynamic story about families, politics and technology woven into this futuristic landscape.

Representing science fiction romance this month is Nicole Murphy’s Winning the King, the second — but stand-alone — volume in her Jorda trilogy. I reviewed it, and found it to be quite exciting and compelling, with the right amount of SF plot versus romance for my tastes.

There was also A Wrong Turn at the Office of Unmade Lists by Jane Rawson, an underrated book that garnered two reviews this past month. It was reviewed by Kelly and Whispering Gums, with the latter writing:

This sounds more complex than it is – or, should I say, it’s conceptually complex but not hard to follow. Indeed it’s a hoot to read, because for all the grim, grittiness of this climate-damaged world, there’s warmth, love and humour – and a delightful sense of the absurd. I loved Rawson’s exploration of the two universes, the “real” and the “imagined”, and the way she has them meet. She messes with our minds!

The Aurealis Award winning short story collection, The Female Factory by Angela Slatter and Lisa L Hannett, was reviewed by yours truly. It’s a collection that deals with different ideas of motherhood and womanhood, mostly from a soft-science fictional perspective.

Next up we have The Ark by Annabel Smith, a near-future post-peak oil epistolary novel. It was reviewed by Jaq, who writes:

A different approach, the “book” consists of a web-site and e-book, available for Ipad, Ipad Mini, Kobo and Kindle. The story unfolds through a collection of digital memos, text messages and emails sent by and to characters. It examines the breakdown of a society in the event of an environmental catastrophe set in the future and finishing in 2041.

I actually almost wasn’t going to write a full review of this book, simply because I wasn’t certain that anything I could write would truly reflect how achingly beautiful this book is.  I fell deep in love with Sulway’s extraordinary prose from the first page, and deeper still with Rupetta, Henri and their world.

She did write a full review, if you’re wondering.