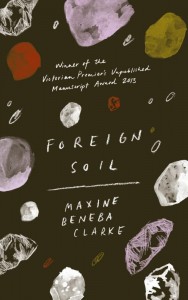 Reviews on books that showcase diversity exploded over March and April! This is fabulous for it shows that, as Maxine Beneba Clarke wrote in her guest post for our focus on writers of ethnic heritage, ‘slowly things are changing’, and that these books form a ‘new and exciting and exuberant chorus’ of diverse writers. On that note (no pun intended), it’s great to highlight that there were four reviews of Maxine’s collection of short stories, Foreign Soil. Both Kate of Books are my Favourite and Best and Janine of Resident Judge commented on the sound of the writing – Clarke ‘flexes her writing chops with extensive use of English dialects – a New Orleans drawl in Gaps in the Hickory, musical Jamaican English in Big Island and the clipped shorthand of Sudanese immigrants in David’, while Janine found ‘real joy in the sound of voices in this book, and it comes through loud and clear.’ These voices mirror the diversity of characters in the work, which reminded Kate of her Cambodian friend Nin who lost part of her leg in the war, and prompted Angela to make the observation that ‘to read is to explore the unknown, places, people, and emotions, outside of our day-to-day existence. Through this we build understanding and empathy, compassion and humanity.’

Christine Piper’s After Darkness is about a Japanese doctor in Broome caught up World War Two and sent to an internment camp. It won the 2014 Vogel award and has received a number of shortlistings. Brenda of GoodReads described it as ‘a hauntingly beautiful novel’, while Carolyn, also of GoodReads, enjoyed the fine writing and extensive research that went into the work. Also on the theme of darkness, there were three reviews of books by author Malla Nunn, who wrote a guest post for our previous Focus on Women Writers of Ethnic Heritage. Brenda of GoodReads enjoyed Present Darkness, the fourth and final book in Nunn’s Detective Emmanuel Cooper series set in South Africa, and was sad to see the end of the series. Joanne of Booklover Book Reviews cautions that, although the book might be classified as historical fiction, being set in the 1950s, in ‘relative terms, this is very recent history and an important reminder how gross inequity can easily be mandated within ‘organised’ society.

There were also three reviews of Alice Pung’s first novel, Laurinda (Alice also wrote a guest post for our previous focus on women writers of ethnic heritage). In this, Lucy Lam, the daughter of Vietnamese boat people, receives a scholarship to an exclusive private girls school. Alice herself is the daughter of boat people, and described her experiences in her memoirs Unpolished Gem and Her Father’s Daughter. As Cassie of Book Birdy writes, Laurinda ‘reeks of authenticity. As the daughter of Cambodian refugees, Pung writes with humour and insight about what she knows concerning the refugee experience of life in Australia; the overt and covert racism, and how it feels to live between two cultures but not fit-in with either.’

If you’d like to learn more about issues such as these relating to ethnic heritage and how this affects the choices writers makes in terms of character and representation, read these guest posts by graphic novelist Queenie Chan, and AWW’s own Marisa Wikramanayake.

How wonderful it is to have reviewers writing about queer authors and their characters! We haven’t seen many of them lately.

Marilyn of Me, You and Books reviewed debut novelist Emma Ashmere’s The Floating Garden, a story set in 1920s Milson’s Point in Sydney as the bridge is being built. The protagonist is Ellis, a lesbian who has run a boarding house for thirty years, and the destruction of the area to make way for the bridge loosens old memories of a girl she loved. As Marilyn writes, ‘Ashmere tells Ellis’s story well … Details are sharp and realistic, while a sense of unreality and transition prevails.’

It was also good to see some favourites reviewed, such as Nike Sulway’s Rupetta, Yvette Walker’s Letters to the End of Love, and Dorothy Porter’s El Dorado. Crime writer Katherine Howell’s latest book, Tell the Truth, was reviewed by Bernadette of Fair Dinkum Crime.

Meanwhile, over in the speculative fiction genre, a romance blossoms between Lain and Sigmund, two IT techies in Liesmith. Reviewer Stephanie found it authentic and moving, as she writes, ‘You make think this is a standard romance, but beneath Lain’s skin lies someone – and something – else, and Sigmund and his friends are thrown into a world of monsters where gods can be reincarnated and not everything is as it seems.’ Another fantasy work, C.S. Pacat’s Captive Prince also featured strong LGBT themes, as Lynxie notes in her review. Hurrah for spec fic writers!

Ellen van Neerven’s Heat and Light also fits into this section, and the next! So I’m talking about it more below.

Ellen, winner of the 2013 David Unaipon award for Heat and Light, has just received a Sydney Morning Herald Best Young Novelist award, along with Maxine Beneba Clarke, Alice Pung, Michael Mohammed Ahmad and Omar Musa. Her book prompted a number of responses, with five reviews over March and April.

Lisa of Welcome to my Library wrote of the work, ‘There is a push-pull in each of the stories as they search to reconcile their sense of belonging, through their sexuality, heritage, family or place. The stories are raw and real; where love and violence sit side by side.’ The jury was out for Janine of Resident Judge, who summed the work as ‘a bit of a curate’s egg of a book: good in places. The writing is lyrical, but occasionally somewhat overwrought.’

Kate of Books are My Favourite and Best was nonplussed, particularly by ‘Water’, the second section, which ‘is about a disconnected scientist having lesbian sex with a mutant plant person. I think I got that right.’ For Brona, however, this section was ‘sexy, disturbing & very provocative – I couldn’t put it down.’ To me, that’s the sign of a good writer! That is, one who can elicit a wide range of reactions.

Finally, Linda of the Newtown Review of Books describes Ellen as ‘as a writer of imagination and intelligence, not afraid to mix fantastic visions with the heat of desire or the need to belong.’

Onto other works by Indigenous women writers – Shannon of Giraffe Days penned a detailed review of Ambelin Kwaymullina’s The Interrogation of Ashala Wolf, which she described as ‘smooth and flowing, engaging and gripping and full of surprises … there is an over-arching storyline at work here, and some Big Picture issues at play: not least of which revolves around discrimination, persecution and dehumanisation of the ‘Other’.’

Robin of Write or Wrong picked up Anita Heiss’s Tiddas and loved it, not least because ‘the main characters of this novel are slightly older than what is standard in this genre. There seems to be lots of books about women in their 20’s, 30’s then a big gap and they start again over 60 with some saucy senility texts.’ She also commented that the work had ‘heavy themes but covered in a very fresh way so that you do not feel lectured at’.

There were also a handful of reviews of books that canvassed Indigenous issues, including two of Justine Larbalastier’s excellent young adult novel Razorhurst set in 1930s Surry Hills in Sydney. Both Shelleyrae and Paper Wanderer were engaged with the characters, which also included a very strong female protagonist, and LGBT themes.

Sue of Whispering Gums also kindly reviewed my novel Entitlement, situating it among her ongoing thoughts on the ethics of white authors writing on Indigenous issues and of Australians’ relationship to land.

Sue also penned a terrific review of Biff Ward’s In my Mother’s Hands, a memoir written by the daughter of Australian historian Russel Ward. This book, however, was about her mother, not her father, and specifically ‘an increasingly delusional, paranoid mother. What that experience was like – and how she eventually unravels the full story – makes compelling reading.’ Jon Shaw echoed Sue’s thoughts, writing, ‘This is a truly marvellous book … [it] makes a substantial contribution to our understanding of  families, of Australian intellectual history, and of the horrifying ordeal known in the medial profession as mental illness.’

And last, but not least, Angela, who read her way through the Stella shortlist, picked up Sofie Laguna’s The Eye of the Sheep. The novel is about Jimmy, a child with autism, who ‘sees what others can’t, giving the reader an insight into the dysfunctional dynamics that make up his family.’ Jimmy, who is ‘resilient and never gives up’, is representative of many people with disability, and it’s heartening to see such characters on the pages of Australian novels.

What a wrap! I’ll be back next month with May’s round up, and I hope you people keep these reviews coming!