Q&A with Ceridwen Dovey: Author of Only the Animals 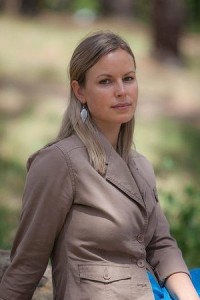 Ceridwen Dovey is the author of a novel, Blood Kin, which was published in 14 countries, and the short story collection Only the Animals, about the souls of ten animals caught up in human conflicts over the last century.

Only the Animals was longlisted for the Stella Prize, shortlisted for the 2015 Victorian Premier’s Literary Awards and the winner of both the inaugural Readings New Australian Writing Award and the Steele Rudd Award (Short Story Collection) at the Queensland Literary Awards.

I think I can safely say that books were my first love. There’s still not much else on earth that comes close to the satisfaction of reading fiction for me, and I started to devour books at a very young age. I had a wonderful model of the joy that deep engagement with books and writing gives, thanks to my mother, who was an academic who researched on and taught postcolonial English literature. My earliest memories are of being read to by her, and also of seeing her lost in a book herself, and I have extremely vivid memories of the covers of the books she was reading (whether for work or pleasure, or both) when I was a young girl, in particular the cover of J.M. Coetzee’s Waiting for the Barbarians, which had an image of legs sort of sawed off at the feet.

When did you begin writing in a serious way, and what motivated that?
I wrote at primary and high school and entered little competitions, and my dad always used to tell me he thought I would be a writer when I grew up. But I think I felt I needed to have something to write about, and was hungry for real experience out in the world. I studied social anthropology for many years, and did fieldwork in remote places around the world, and nurtured hopes of becoming an ethnographic filmmaker. I returned to writing fiction during a difficult couple of years, when I was struggling to find a way to be the kind of documentary filmmaker I wanted to be, and unsure about how to do it without compromising my creative ideals. I started writing my first novel, Blood Kin, as a way of expressing myself creatively during this fallow time in my life as a filmmaker. But I quickly remembered how much I had missed using language in my filmmaking, and found the process challenging but also extremely stimulating. How did your debut collection Only the Animals come to be written and published?
I started the first story for this collection in 2006, after a wonderful social anthropology professor of mine in New York City, had told me a very moving story about her relationship with her pet parrot, who she had given up for adoption after 9/11 because it was beginning to self-mutilate in response to the collective stress and pollution in the city. I’ve always been drawn to understanding human conflicts in my fiction, and suddenly I thought it might be interesting to look at major human conflicts of the past century from an oblique angle, through the eyes of animals. I didn’t really realise that it was developing into a short story collection – I just kept being drawn to these animal voices, and to certain conflicts, and certain authors who had written about animals. I honestly didn’t think it would ever get published – but luckily Benn Ball at Penguin Australia didn’t think I was a complete nutter when my agent sent it to him, and they published it a year ago.

What are your writing habits?
My writing habits change quite a lot, to be honest – depending on my circumstances. I’ve balanced writing fiction with a “day job” (whether social anthropology graduate school and teaching, or tutoring high school kids, or working as an environmental researcher) ever since I started writing fiction, and did until very recently. Now I juggle finding time to write long-form fiction with taking on enough freelance writing work to make a living, plus caring for my young son. But over the years I’ve come to appreciate the chaos of the juggling act, and when I speak to other women writers, they often express a similar sentiment – that not all writers can write in the ‘genius’ mode we’ve long been taught is the only way to write well, e.g. complete immersion, total devotion and commitment, neglect of all other duties and responsibilities, for long periods of time. I feel like over the years I’ve managed to fit in my writing around other things also important to me: earning a living, family, friends. I don’t worry anymore if I can’t get back to a project for a few months, or even longer – as long as I’m using words to make my wage, I’m happy.

What do you do when you feel creatively stuck?
I never get creatively stuck, thank goodness. But my problem, I think, is managing how I feel about a work that is still in nascent, first-draft form – I like editing, but I’m also very much in danger during that time of throwing in the towel on the project altogether, when that is not always the right decision. I don’t have much advice about this because I haven’t figured out how to stop myself doing it – except that I think I’m learning that there’s a limited window of time after finishing a first draft where you can productively go back in and do major rewrites and edits.

What are you working on now?
Loads of freelance writing, including some very interesting non-fiction assignments for the Monthly and the New Yorker – while trying to edit a novel in that dangerous first-draft stage I mentioned above!

Have you checked out the AWW Challenge podcast? Marisa Wikramanayake in conversation with Marianne de Pierres

Looking for your next great read? Try the March round-up of classics and literary fiction

If you enjoy interviews, check out this Q&A with children’s author Allison Tait.

Ceridwen was interviewed by Annabel Smith, the author of Whisky Charlie Foxtrot (published in the US as Whiskey & Charlie), and A New Map of the Universe, which was shortlisted for the WA Premier’s Book Awards. Her short fiction and non-fiction has been published in Southerly, Westerly, and Review of Australian Fiction. She holds a PhD in Writing. Her latest release is the digital interactive novel The Ark. Connect with her on Facebook and Twitter.