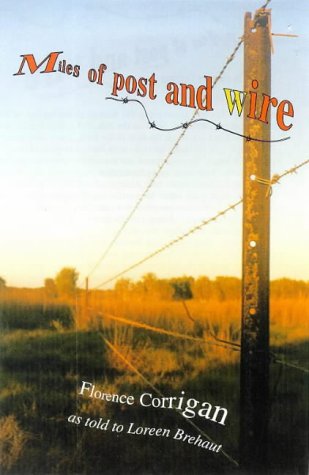 Welcome to our bi-monthly round-up of History, Memoir and Biography (HMB) reviews.

The reviews and reviewers have been very diverse this time around, which suggests to me that we all like our HMB, just in small doses and preferably a memoir.

Miles of Post and Wire by Florence Corrigan was reviewed by Jennifer @goodreads. One of the things I’m really enjoying about hosting this round-up is discovering so many new stories. I will never be able to read all these books in my lifetime, but your reviews give me tantalising glimpses into new worlds. I loved how Jennifer wound up her review of Corrigan’s book as I believe it’s why most of us read HMB.

It’s difficult reading Flo’s story, reading of the hardships she endured, and the reminders of practices such as forced adoption. But her story is well worth reading, both because it reminds us that these aspects of the past are not yet only confined to history, and because Flo herself has made her own life count despite the adversities she has experienced. Flo needed to discover her past, and we need to remember it. e Newtown Book Reviews and I both reviewed Kate Grenville’s story about her mother, One Life. Robyne was impressed by Grenville’s ability to piece together the fragments of her mother’s story:

With the consummate skill she uses in her fiction combined with a deep desire to present the story of the mother she loved deeply, Grenville brings the reader the story of Nance Russell: daughter, pharmacist, wife, mother, mature-age student, traveller and grandmother.

We’ve all heard of Elizabeth Gilbert and her huge hit memoir, Eat, Pray, Love, but have you heard of Elizabeth Lowrie? Monique @Write Note Reviews has. Lowrie’s story reminds us how one person’s best-selling memoir can be another person’s worst nightmare. Lowrie was shocked to learn via Gilbert’s second memoir, Committed, that her ex-husband (now Gilbert’s second husband) considered himself a survivor of a “very, very bad” divorce. Lowrie believed their split had been gracious. Her book, Committed Undone, sets out to tell her side of the story.

Jeanette @The Newtown Review of Books read Patti Miller’s Ransacking Paris. I quietly wondered if we really needed another memoir about a year spent in Paris, writing, walking and enjoying the cafe scene, but I realised that jealousy has no place in here!

Exactly when this Parisian year happened is not spelled out, but the manuscript on which she was then working was published in 2003. So, in this current memoir, Miller recounts experiences over ten years old, presenting them in chapters named after the successive months of her stay. That neatly divided structure doesn’t stop her from swirling together different time frames: the memories of that year interlace with explorations of childhood, marriage and motherhood. She even slides now and then into events from the years after that French sojourn. Then there are multiple layers of French history and culture specific to each locale, mainly in Paris but occasionally further afield.

Home Truths by Mandy Nolan is a comedic memoir and, as reviewed by Lisa Walker on her blog, reminds me of a Jerry Seinfeld stand-up routine centred around domestic do-do’s.

Tarla @Tarla’s Blog enjoyed Alice Pung’s first memoir, Unpolished Gem, and has been meaning to read the second one, Her Father’s Daughter ever since. But the horror of the Cambodian war initially put Tarla off.

[F]inally, we must bite the bullet and face the horrors of the killing fields, and her father’s story of the suffering that went on is one the reader must grit their teeth to get through. No wonder her father didn’t ever speak of it. But it seems that only after Pung delves into this history and visits the country is she finally allowed to grow up.

Having read both memoirs, Tarla feels they not only complement each other, but complete each other.

Tsana @Tsana’s Reads and Reviews has added to the growing review numbers for the Cranky Ladies of History, an anthology edited by Tansy Rayner Roberts and Tehani Wessely. this book was intended as an introduction to the men and the legend and myths that surrounded them, not their total war experience, making it fine for young children to read without the fear of your child getting upset or being exposed to aspects of war that they are not ready for.

Fashion memoirs are not usually Louise @A Strong Belief in Wicker’s forte, but she found herself drawn to Dress, Memory nonetheless. Lorelei Vashti describes her fascination with fashion by saying:

Some people remember stages of their lives through the smells of certain places or the music they were listening to during that time. I remember them through my clothes. The dresses are precious because they mean something to me. Things become more valuable once you know the story behind them…

Louise suspects that avid readers have the same associations with books.

Finally, Melissa Fagan reviews The Ghost at the Wedding by Shirley Walker (winner of the 2010 Kibble Literary Award). Walker has written a number of biographies on Judith Wright over the years, but in recent years she has tackled her own family histo The book is unsentimental is its depiction of war and its aftermath. It is meditative in tone, and rewards close reading. Perhaps this is why it remains an unsung hero, despite winning the Asher and Kibble Literary Awards, and being shortlisted for the Prime Minister’s Literary Awards. As non-fiction, the book was ineligible for the Miles Franklin, and published too soon to be considered for the Stella Prize. It deserves to be read, and those who find their way to it will be rewarded – as I was.

Melissa’s review also provides an interesting insight into the craft of writing memoirs as she explores Walker’s use of present tense to ‘make the past present‘.

On the 15th July, this year’s winner of the Kibble Literary Award will be announced.

The Awards recognise the works of women writers of fiction or non-fiction classified as ‘life writing’. This includes novels, autobiographies, biographies, literature and any writing with a strong personal element.

The three shortlisted books are Warning: the Story of Cyclone Tracy by Sophie Cunningham, This House of Grief by Helen garner and The Golden Age by Joan London.

About Bronwyn: I have been a book blogger at Brona’s Books since 2009 and a bookseller (specialising in children’s literature) in Sydney since 2008. My previous incarnation was as an Early Childhood teacher for 18 years in rural NSW. I taught myself to read when I was four by memorising my Dr Seuss books. I haven’t stopped reading since.  You can find me on Twitter @brona68.