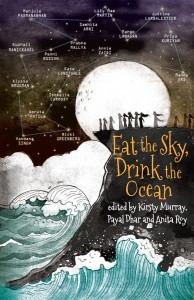 The best speculative fiction – if not, by its very nature, all speculative fiction – explores issues of social justice and ethics, often along the lines of discrimination, prejudice and, beyond that, cloning, robotics – all things that ultimately lead to that unanswerable question: what does it mean to be human? [Shannon from Giraffe Days]

What better way to introduce the Young Adult Speculative Fiction roundup for April and May? This period saw 20 books entered in this category, only a few of which are  2015 and 2014 releases. Several of the books reviewed were collections of short stories. Among the most recent releases reviewed was Eat the Sky, Drink the Ocean (2015, Allen & Unwin), an anthology which includes short stories, a graphic novel and a script written by Australian and Indian women writers. Edited by Kirsty Murray, Payal Dhar and Anita Roy, it was inspired by the rapes of an Indian and an Australian woman, and features works by a number of well-loved Australian authors, including Isobelle Carmody, Margo Lanagan, Kate Constable and Justine Larbalestier. The result is thought-provoking, according to Shannon (from whose review the above quote was taken), especially in relation to gender issues:

It made me think, what would this anthology look like if, keeping the same purpose and ideas and focus on girls, it was written by male authors?

For me, this question has particular resonance in the light of author Nike Sulway’s recent “count” of the gender breakdown of protagonists and point of view characters in award-winning Australian fiction.

As Shannon observes, “We have a long way to go yet, in gender equality and respecting women.” The impact of the anthology is positive, however, leaving her with the view: “We all have something worthwhile to offer the world. We can find safety and harmony and joy in working together and loving each other. And, ultimately, change is possible.” Another recently released anthology reviewed for the challenge is Kaleidoscope (2014, Twelfth Planet Press) edited by Alisa Krasnostein and Julia Rios. It’s a collection which focuses on and celebrates diversity. Elizabeth at Earl Grey blog writes:

Diversity is at the heart of this anthology in a number of ways. There are queer characters, characters who use wheelchairs, characters dealing with depression and chronic illnesses, characters from a range of ethnic backgrounds. In some cases the diversity is intersectional.

Elizabeth raises an interesting question regarding the use of the term “disabled”, both in the blurb for this anthology and in the promotional material for the upcoming anthology Defying Doomsday (edited by two of our AWW volunteers, Tsana Dolichva and Holly Kench). For those of you who might wonder about this term and its use, there’s an interesting reply in the comments section. On the topic of diversity, Shannon also reviewed the futuristic, post-apocalyptic novel, The Interrogation of Ashala Wolfe, by Indigenous author Ambelin Kwaymullina (Walker Books, 2012). Shannon found the novel “beautifully written and absorbing”, while Glaiza who also reviewed it (very briefly) “enjoyed the creative worldbuilding which was tied to beliefs about the post-apocalyptic earth”.

On a lighter note, Sheree Christoffersen reviewed two books by Kaz Delaney, the award-winning Dead, Actually (2012) and its sequel Almost Dead (2014), both paranormal/mystery stories with romance elements from Allen & Unwin.

Dead, Actually is about Willow, a teen who finds herself a magnet for the ghost of a classmate.

Almost Dead follows [Willow’s friend] Macey…[who] has become sensitized to ghosts and they’ve been turning up in her bedroom with alarming regularity.

According to Sheree, Delaney – who also writes under the name Kerri Lane, and is very encouraging of young authors – tells a great story. Glaiza posted a link to a suite of brief reviews of speculative fiction books for International Women’s Day including, not only the Ambelin Kwaymullina novel mentioned above, but also Cassandra Golds’ short story collection, The Three Loves of a Persimmon (2010):

Cassandra Golds’ stories are like poetic fables. Her work touches on both the fantastic and darker moments in life. This approach reminds me of Antoine de Saint-Exupery’s The Little Prince. This whimsical story may follow a quirky florist but it is also about taking risks and recovering from the unexpected.

These are only a sample of the reviews of YA Speculative Fiction linked to the AWW challenge during this period. You can check out the rest of the reviews on our search page.

Note: Our regular roundup editor, Shaheen, wasn’t able to do this month’s post. With luck she’ll be back for the next roundup.