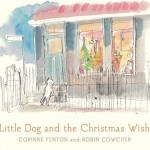 Well, only 14 reviews this month. Very quiet! Perhaps our reviewers were curling up with DVDs instead of books. Four of the fourteen reviewed have already been highlighted in the last few months but here are the links for those who may be new to the roundup. This month The Floating Garden by Emma Ashmere was reviewed by Jessica White and Sue from Whispering Gums. The Strays by Emily Bitto was reviewed by Julia Tulloh and The Anchoress by Robyn Cadwallader was reviewed by Jennifer at Goodreads and Brona at Brona’s Books. Lastly the anthology Cranky Ladies of History, highlighted last month was reviewed this month by Stephanie Gunn. It’s lovely to see a children’s book and a young adult book reviewed this month. The first is Little Dog and the Christmas Wish by Corinne Fention and Robin Crowcher. Brona from Brona’s Books writes: “Cowcher’s beautiful pictures capture the natural movement and expressions of both dog and boy to a tee. Set in the 1950’s, her wistful water colours & line drawings evoke the period and celebrate the season.”

The young adult book is When the Hipchicks Went to War by Pamela Rushby. Mel from Subversive Reader was a little disappointed. “It’s a good read – fun when it needs to be, sad or suspenseful or upsetting when it needs to be. But it doesn’t really stretch beyond being ‘just a good read’ and it doesn’t really stand up against some of the more recent YA books being released in Australia and beyond.”

Two books set in the Cromwell period of English history were reviewed this month. They are from the Guardians of the Crown series by Alison Stuart. The first in the series is By the Sword and Carolyn at Goodreads found “The period setting for this novel was excellent with good descriptions of the events and battles leading up to the second exile of Charles II. The details of day to day life and what it meant to be a puritan or a royalist in the 1650s also felt well researched. Kate is a strong character, a feminist of her time able to stand up to bullies and protect those she loves.”

Brenda at Goodreads reviewed the second book in the series The King’s Men and was very impressed. “I love this author’s writing and can’t wait for her next book (whatever it may be) – she has historical fiction down to a fine art! Highly recommended to all.”

And now across to France for Goddess by Kelly Gardiner. “Julie d’Aubigny is born in the shadow of greatness. Growing up in Versailles, her father the chevalier gives her the only upbringing he knows: training her to fight and shoot and ride, unintentionally ensuring that she will never live by the boundaries other women unquestioningly obey.” Faith at Beyond the Dreamline observes: “I’d have loved more detail about Julie’s experiences and the glittering, vicious world she inhabited. The story is well woven, however, making the extraordinary events consistent and believable.”

We have had a few books lately set in or soon after the effects of Gallipoli. In Fiona MacIntosh’s Nightingale – “Amidst the carnage of Gallipoli, British nurse Claire Nightingale meets Australian Light Horseman Jamie Wren. Despite all odds, they fall deeply in love.” Veronica at Goodreads concludes: “Well researched, I would recommend this novel it’s an enjoyable romance and a compelling WW1 read. A very good combination of both romance and the horrors of war!”

And finally to the Second World War with Nine Days by Toni Jordan. “It is 1939 and Australia is about to go to war. Deep in the working-class Melbourne suburb of Richmond it is business—your own and everyone else’s—as usual.” Kelly at Orange Pekoe Reviews writes: “I was amazed at how masterfully the settings were brought to life, particularly the earlier decades of the 20th century. I honestly felt like I was walking around in one of my grandparents’ old black and white photos. The more modern decades were also well done but eclipsed by the perfect essence of wartime Australia.”

A very interesting and diverse month. I wonder what everyone will be reading in July. I’m looking forward to finding out.