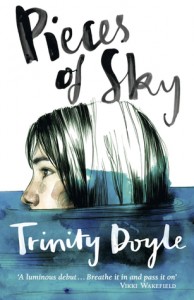 It’s been a lovely busy time of the year for Australian YA, with some great new books being released, read, raved about and reviewed. It’s really exciting to be able to share some of those here. Pieces of Sky by Trinity Doyle was an absolute hit with our reviewers. Lucy is a champion backstroke swimmer, always training or at school until her brother drowns while he’s away with his friends. The book follows Lucy as she deals with putting life back together again after terrible loss.

Cassie was absolutely hooked on this book from the beginning and noted that the success in the book lies in how well the author deals with Lucy as a narrator:

“The story is told entirely from her point of view – the reader is exposed to no other, which can be a limitation in the hands of less capable authors. Fortunately, Trinity Doyle totally succeeds in creating a character that is entirely believable. She makes this all-consuming voice into a comfortable place to be.

“As a narrator, Lucy is authentic and unaffected. She is tough but tender, strong yet vulnerable. She is contradictory in a way that only teenagers know how to be. She is the skating, surfing, swimming tom-boy who goes weak at the knees when a boy kisses her.”

Sheree found Pieces of Sky an engaging book and talks about how it works as a coming of age novel:

“Pieces of Sky is not just about loss and grief, though. It’s about Lucy rediscovering life. Her time has been so regimented – train, study, train – that now she’s unable to go into the water, she has to learn how to live outside of a strict timetable. She’s let friendships and other interests slide. Without her brother, who introduced her to new things, and swimming, that let her go through her days without having to make decisions, she has to forge a new path on her own.

“With a premise that sounds somber, Pieces of Sky has plenty of lighter of moments. It’s well written, and I wanted to hurry up and get back to it when I had to do something else. That’s always a marker of a great book.”

Sheree also reviewed Risk by Fleur Ferris which is attracting a lot of twitter chatter at the moment. Risk looks at cyberstalking and predatory behaviour while also touching on the intricacies of friendships and social groups for teenagers.

“The premise of Risk is what every teen believes won’t happen to them, and every parent’s nightmare. The reality of predators cyberstalking teenagers is difficult to convey, and the ease with which they can  glean so much about a target’s life is terrifying.”

Finally we have One True Thing by Nicole Hayes, which was reviewed by Bree. One True Thing drops us into the life of Frankie, the daughter of the current Victorian Premier who is currently working to become the first elected female premier of the state. The campaign means that almost all of Frankie’s life revolves around politics and image – the last place she’d really like to be. When her mother – and therefore their whole family – is dragged through the mud, Frankie’s life begins to unravel out of her control.

“One of the biggest issues in politics is – how much is the public entitled to know about the private lives of those they vote into public office? It’s something that’s happened on all levels, from local members right up to the President of the United States of America. Are their personal lives really any of our business, if they’re good leaders (and even if they’re not?)”

As well as our reviews this month, I wanted to point out the LoveOzYA twitter account. There’s been a growing movement from Australian authors and reviewers to promote more Australian YA on social media in a response to the low number of Australian YA books in the ‘most borrowed’ list. There’s been a lot of really interesting discussion about writing and reading YA books, as well as some fabulous and diverse recommendations. If you’re on twitter, I highly recommend following it.

thers hinting that I am supposed to ‘grow up’ at some point, YA novels continue to play a huge part in my reading life. This has served me well, when I became a teacher and was known for always having a book recommendation at hand. I’m currently enjoying the rich world of picture books with my toddler, revisiting some of my favourite authors and sporadically blogging over at Subversive Reader