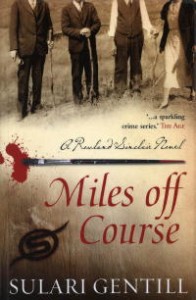 Hello everyone. Twenty reviews this month which is nice to see, including some regulars. The Anchoress by Robyn Cadwallader, Razorhurst by Justine Larbalestier, The Soldier’s Wife by Pamela Hart and Wild Wood by Posie Graeme-Evans have all been featured in the last few months. The July reviews can be found here.

I’ve shamelessly added Miles Off Course by Sulari Gentill to my TBR list. It is the third book in the Rowland Sinclair series. Brona from Brona’s Books writes: This delightful series set in 1930’s Sydney has become my go-to read when feeling overwhelmed and tired. Don’t we all need such a book to reach for when we are feeling that way? She adds: “All the main characters are now firmly established and it is a delight to just sit back and watch them do their thing.”

Still on the subject of murder we have five reviews this month for Felicity Young’s Dr Dody McCleland series. I’ll start with The Dissection of Murder the first in the series, which confusedly, is also known overseas by the title of The Anatomy of Death. Gypsysmom (a fellow bookcrosser) writes: “Women have come a long way since the beginning of the twentieth century and this book does a good job of reminding one of that.”

Carolyn at Goodreads has reviewed both the third and the fourth book in the series. She writes: “Felicity Young’s books are a wonderful mix of cosy crime, historical fiction and social commentary.” In The Scent of Murder “For Doctor Dody McCleland, the unearthing of an ancient skeleton in a dry riverbed is a welcome break from the monotony of chaperoning her younger sister at a country house near the isolated hamlet of Piltdown.”

The fourth book in the series The Insanity of Murder garnered three reviews. Carolyn at Goodreads says: “Yet another excellent episode in the series featuring forensic surgeon Dody McCleland. The year is 1913 and Dody, assistant to Britain’s chief pathologist, Bernard Spilsbury, has been called in to help identify a number of bodies.” Bernadette at Fair Dinkum Crime observes: “As with its three predecessors this book uses the solving of a crime by compassionate investigators as the means of highlighting a fascinating historical subject.” Last but not least Brenda at Goodreads writes: “I thoroughly enjoyed The Insanity of Murder which is my first by Aussie author Felicity Young and #4 in the series. (I will now go back to #1 and read them all).”

Back a century to Kate Forsyth’s The Wild Girl. “Growing up in the small German kingdom of Hessen-Cassel in the early Nineteenth century, Dortchen Wild is irresistibly drawn to the boy next door, the young and handsome fairy tale scholar Wilhelm Grimm.” Jennifer at Goodreads says: “I enjoyed this novel and the way the story is presented. Much of the story is told through conversation, which brings the people and the times to life.”

Another novel by Kate Forsyth was also reviewed this month – Bitter Greens. “The amazing power and truth of the Rapunzel fairy tale comes alive for the first time in this breathtaking tale of desire, black magic and the redemptive power of love.” Kathryn at Book Date concludes: “If you enjoy fairy tale retellings and/or historical fiction then this book is a book that should be at the top of your list to read.”

Also on indigenous issues is Freedom Ride by Sue Lawson. “In the summer of 1965 racial tensions in the town are at boiling point, and something headed Walgaree’s way will blow things apart.” Mel from Subversive Reader concludes: ” I thoroughly enjoyed this book and I’m really glad that there’s Australian Historical YA dealing with this part of our history. I really hope more authors tackle this political and social history into the future.”  I’ll second that.

And here is another book fitting that bill – Long Bay by Eleanor Limprecht. “In 1909 Rebecca Sinclair was sent to Long Bay Women’s Reformatory after she was convicted of manslaughter. A mother-of-three had died at her house after a botched abortion.” Paula at Wordsville writes “As a Sydney local, I loved reading about characters riding on the Bondi tram, shopping at David Jones and having picnics in Centennial Parklands. Long Bay will appeal to readers who enjoy historical fiction and those interested in the social history of Sydney.”

We have murder mysteries, social history, fairy tales and more. Quite a selection. What will you choose to read this month?