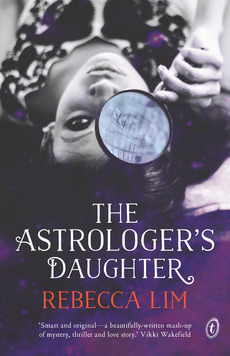 Welcome to the June and July 2015 round-up of YA Speculative Fiction! There were only four reviews submitted for in this period. Avicenna Crowe’s mother, Joanne, is an astrologer with uncanny predictive powers and a history of being stalked. Now she is missing. The police are called, but they’re not asking the right questions. Like why Joanne lied about her past, and what she saw in her stars that made her so afraid. But Avicenna has inherited her mother’s gift. Finding an unlikely ally in the brooding Simon Thorn, she begins to piece together the mystery. And when she uncovers a link between Joanne’s disappearance and a cold-case murder, Avicenna is led deep into the city’s dark and seedy underbelly, unaware how far she is placing her own life in danger.

Tsana reviewed The Astrologer’s Daughter by Rebecca Lim, finding it “a nice mix of crime and contemporary fantasy and pretty light on the fantasy front”. She liked the Melbourne setting, the protagonist, and the book’s exploration of racial issues “which lent authenticity to the book”. “It was a book that sucked me in straight away and one that I didn’t want to put down.”

The setting: Razorhurst, 1932. The fragile peace between two competing mob bosses—Gloriana Nelson and Mr Davidson—is crumbling. Loyalties are shifting. Betrayals threaten. Kelpie knows the dangers of the Sydney streets. Ghosts have kept her alive, steering her to food and safety, but they are also her torment. Dymphna is Gloriana Nelson’s ‘best girl’, experienced in surviving the criminal world, but she doesn’t know what this day has in store for her. When Dymphna meets Kelpie over the corpse of Jimmy Palmer, Dymphna’s latest boyfriend, she pronounces herself Kelpie’s new protector. But Dymphna’s life is in danger too, and she needs an ally. And while Jimmy’s ghost wants to help, the dead cannot protect the living …

“It’s a long time since reading a novel has made me gasp out loud, but it happened with Justine Larbalestier’s Razorhurst, a gripping, bloody, at times heartbreaking novel, set in Sydney’s inner east in 1932.” So begins Angela Savage’s review of Razorhurst by Justine Larbalestier. She loved the characters – “the novel’s emotional punch comes from its characters: Kelpie and Dymphna are wonderfully rounded and convincing” – and the way that the main narrative was peppered with “short, sharp (no pun intended) chapters about minor characters, settings and vignettes”.

“Jubilee Chase and Flynn Cormac should never have met. Lee is captain of the forces sent to Avon to crush the terraformed planet’s rebellious colonists, but she has her own reasons for hating the insurgents. Rebellion is in Flynn’s blood. Terraforming corporations make their fortune by recruiting colonists to make the inhospitable planets livable, with the promise of a better life for their children. But they never fulfilled their promise on Avon, and decades later, Flynn is leading the rebellion. Desperate for any advantage in a bloody and unrelentingly war, Flynn does the only thing that makes sense when he and Lee cross paths: he returns to base with her as prisoner. But as his fellow rebels prepare to execute this tough-talking girl with nerves of steel, Flynn makes another choice that will change him forever. He and Lee escape the rebel base together, caught between two sides of a senseless war.”

Faith Mudge has reviewed This Shattered World (Starbound #2) by Amie Kaufman and Meagan Spooner. Although she found the book weaker than its predecessor – These Broken Stars – she thinks its “best strength was in world building, expanding on the growth of colonies and the transference of Earth culture into a new world”. The third book of the series, Their Fractured Light, will be released in December.

In 2084, three teenagers discover the secret to time travel. At first their jumps cover only a few seconds, but soon they master the technique and combat their fear of jumping into the unknown. It’s dangerous. It’s illegal. And it’s utterly worth it for the full-body bliss of each return. As their ability to time jump grows into days and weeks, the group begins to push beyond their limits, with terrifying consequences. Could they travel as far as ten years, to escape the authorities? They are desperate enough to find out. But before they jump they must be sure, because it only works in one direction. Once you trip forwards, there’s no coming back.

“A lot of future-set fiction deals with issues of resource shortages and rationing. Lifespan of Starlight continues this idea, but joins it to a nasty habit of Australian society to insist that resources should be kept for the ‘right’ people.” Mel @ Subversive Reader reviewed Lifespan of Starlight by Thalia Kalkipsakis, finding it a complex book that “held together successfully most of the time”. Conceding that some characters felt like stereotypes and the ending felt too neat, Mel concludes by saying “there’s something terribly engaging about this book, and the ideas in it are utterly worth thinking on after the book is finished”.