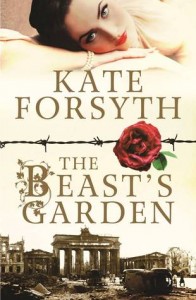 A big month this month with 25 reviews of 15 books including a children’s book. Two books garnered four reviews each which is exciting and several books made their review debut, at least for this rounderuperer.

The Beast’s Garden by Kate Forsyth is one of the two books with four reviews. Sean from Adventures of a Bookonaut explains…”it’s a reimagining of one of the early Grimm tales, The Singing, Springing Lark.  So if you know the tale then the plot might not present too many surprises. Then again part of the fun in reading fairytale remakes is seeing what the author does with the story.”  Shelleyrae from Book’d Out writes: “With authentic and compelling detail Forsyth explores life under the Nazi regime in the lead up and during World War Two.”

Jo from Booklover Book Reviews observes: “Although not always in the foreground, the fairytale references, both direct and symbolic, imbue this novel with an artistic spirit and timelessness not often found in WWII fiction written from a German perspective.” And Tracey at Carpe Librum concludes: “The Beast’s Garden is bound to appeal to a wide market, those looking for a complex love story and those who want a fresh perspective on the fall of Berlin and the impact of this war on everyday Germans.”

More fairytales. This time with The Forgotten Garden by Kate Morton. “A foundling, an old book of dark fairy tales, a secret garden, an aristocratic family, a love denied, and a mystery.” Hannah at Goodreads says: “The twists and turns had me hooked from the start. A great read and I recommend if you want to escape the real world and be immersed in a great story.”

From fairytales to legend brings us to Naked: A Novel of Lady Godiva by Eliza Redgold. “We know her name. We know of her naked ride. We don’t know her true story.” Monique from Write Note Reviews found the novel “left a lingering feeling of satisfaction for some time after I’d set it aside. I enjoyed the glimpse into an historical period I knew little of – it’s made me want to know more.”

The second of the books with four reviews set in the present day and World War II is The Secret Years by Barbara Hannay. “When Lucy Hunter stumbles upon her grandfather Harry’s World War II memorabilia, she finds a faded photograph of a stunning young woman known simply as ‘George’ and a series of heartfelt letters.” Jeannette at Goodreads writes: “This novel captivated me as much as the descriptions of the wild beauty of the Australian bush and the rugged and picturesque south coast of England. The Author’s style of writing had me side by side with the characters.” Brenda at Goodreads writes: I absolutely loved The Secret Years by Aussie author Barbara Hannay which is her best yet in my opinion.”

Shelleyrae at Book’d Out says: “The Secret Years is Barbara Hannay’s 49th book, in which she blends a contemporary and historical narrative to present an engaging novel about family, heroism, heartbreak and love.”  Tien at Tien’s Blurb was a little disappointed with how the secret was revealed and concludes: “If you adjust your expectation to a good rural romantic novel, I think you will really enjoy this book.”

And now for something completely different, we have the children’s book The Stone Lion by Margaret Wild, illustrated by Rita Voutila. “Sometimes statues are granted a chance to become warm, breathing creatures.” Louise from A Strong Belief in Wicker says: “The Stone Lion is a beautiful picture book. A story of sadness and joy, despair and hope.”

Back to the middle of the last century we have Salt Creek by Lucy Treloar. “Salt Creek, 1855, lies at the far reaches of the remote, beautiful and inhospitable coastal region, the Coorong, in the new province of South Australia.” Brenda at Goodreads says the book is “a profound and deeply moving novel of very early Australia and the trials and tribulations of the early settlers.” Jennifer at Goodreads concludes strongly: “Aspects of the story, and certain of the characters remain with me, and I suspect that this is a novel I will choose to reread.”

I highlighted Long Bay by Eleanor Limprecht last month but it has garnered another three reviews (quite varied) this month. Michelle at Adventures in Biography observes: “From a sharp beginning we tumble back in time to discover how Rebecca Sinclair came to be there.  What is likely a common enough story – the father dies, mother and children are reduced to the very edge of abject poverty – is, in Limprecht’s capable hands, brought vividly to life.” Kate at  Booksaremyfavouriteandbest was disappointed.  “I didn’t become adsorbed in the time, or the place (Sydney at the turn of the twentieth century). I didn’t feel as if I was seeing life through Rebecca’s eyes – I didn’t feel her hunger, her despair, her lust.” Shelleyrae at Book’d Out concludes: “I feel it is a story that will interest readers of both historical fiction and non fiction, especially those curious about women’s lives and issues at the turn of the century.”

Last but definitely not least we have two thirds of Eleanor Dark’s acclaimed trilogy The Timeless Land. Both books were reviewed by one of our busiest reviewers Jennifer at Goodreads. “Rereading this novel reminded me of the joy I found in reading it the first time, my sense that Eleanor Dark had captured something of the mystery of the land, as well as a sense of the impact of European arrival on both Europeans and Aboriginals.”

Storm of Time, the second instalment in the trilogy, begins in 1799, three years after the departure of Governor Phillip. Jennifer at Goodreads concludes: “I am currently reading the final book in the trilogy ‘No Barrier’. I’d wholeheartedly recommend this trilogy to anyone interested in fiction set in Australia’s colonial past.”

A lot to choose from here, peoples. Historical fiction written by Australian women writers is definitely becoming a force to be reckoned with.