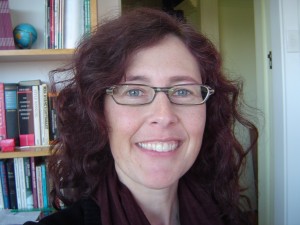 Last week Inga Simpson opened our focus on lesbian/queer women writers, which we’re holding over October. This week we have  Tricia Dearborn, the author of two collections of poetry, The Ringing World (2012) and Frankenstein’s Bathtub (2001). Her work has also appeared in anthologies including Australian Poetry Since 1788 (2011), Out of the Box: Contemporary Australian Gay and Lesbian Poets (2009), The Best Australian Poems 2012 and 2010 and The Best Australian Poetry 2008, as well as in numerous literary journals.  Tricia has received several grants from the Australia Council’s Literature Board, and was joint winner of the 2008 Poets Union Poetry Prize. She has degrees in biochemistry and arts, worked briefly in a research laboratory and now earns her living as a freelance editor.

In her piece below, she writes about a theme familiar to AWW’s readers – the difficulty of having one’s work fairly reviewed when reviewers object, whether consciously or not, to gender and identity. The worst review I have ever read (and I’ve read a lot of reviews) was of my own first collection of poetry, Frankenstein’s Bathtub (Interactive Press, 2001). I no longer have access to that review – it was published online, in a journal that’s now defunct, and I can’t find the copy I’d made – but parts of it are seared into my memory. The (male) reviewer began by saying the White Pages (a printed telephone directory, for those too young to remember it) would be a riveting read by comparison, and it was all downhill from there.

To say I was shaken up would be an understatement. I was shocked. Not so much by the fact that the author did not like my writing, even though he expressed his dislike in blistering terms, but the fact that in the review he impugned not only my writing but my character; that he had used a public space to launch what was, in effect, a personal attack, one that I had no means of responding to.

The reviewer’s basic take seemed to be that I was clearly anti-child and anti-family, a selfish and generally morally suspect person. It wasn’t until later that I began to wonder if the source of his fulminating outrage was that I was queer.

As other guest authors on this site have noted, there are visibility/invisibility issues intrinsic to this whole queer thing. Yvette Walker wrote: ‘It has to do with closets, I think, and halls of mirrors, and invisibility.’ I am ‘out’ pretty much everywhere, but I don’t look like a stomping diesel dyke. Back in the 90s, when I only ever wore trousers and had the sides and back of my head shaved with the no. 2 clippers, I was appalled to discover that I was generally considered to be the ‘femmiest’ member of my lesbian a cappella choir. When one of my partner’s friends met me, in the early days of our relationship, she warned my partner not to expect too much, because I ‘looked straight’.

Sometimes this is fun. I remember the looks on the faces of a mostly older male audience the first time I read ‘The changes’ – which details my first kiss with a woman, its profound effects and joyous consequences – at a reading. Other times it’s faintly frustrating, as when I pass a woman who’s clearly lesbian on the street, feel a glow of familiarity and solidarity, but realise my queerness has gone unrecognised.

But what about visibility/invisibility in the writing itself? A few years ago I saw three Korean poets read at a Red Room event. I found one poet’s work particularly moving. In the Q&A session afterwards, someone in the audience asked him, ‘What do you write about?’ After a short pause, he said, ‘Life.’ As if to say, what else would you write about? I too write about life, my own life is often my material, and that means intimate relationships between women are one of the things my writing explores. Not that Frankenstein’s Bathtub is heaving with lesbian action. There are exactly two poems in the book from which a reader could infer that I was queer. In one, ‘The poets steal each other’s dreams’, a visiting, pregnant poet friend stays the night and (platonically) shares my bed. That night I dream of seeing a pregnant woman dancing in the mirror, while my friend dreams of ‘loving women / to spite her flirting husband’. In another poem, ‘Mardi Gras’, I’m getting ready to drum in the Mardi Gras parade, my sister and brother-in-law spraying me with glitter in the kitchen.

The poem the reviewer fixated on was called ‘My possibly pregnant friend’. When I wrote that poem, this friend (a different friend to the dream-stealing poet) did not want to be pregnant, and I didn’t want her to be either. When she does the pregnancy test, ‘I hope / for the colour of reprieve’, anticipating the difference a small child will make to our friendship, which included ‘evenings spent in cafes over / lattes, disasters, revelations.’ As it happened, a little under nine months later I visited my friend in hospital to meet a very sweet, rather bruised and jaundiced baby, who I have since watched grow into a wonderful young woman.

The reviewer seemed to infer, from my regret at the potential loss of uninterrupted time with my friend, that I was against people having children, and families in general. To draw this conclusion, he had to ignore many other positive references to children and family, for example a poem called ‘Small traveller’, about a woman in a shopping centre tenderly whispering into the ear of her very small baby (‘is she passing on / the direction of north, / where to find water, things / intrepid travellers in new country / need to know?’). ‘My possibly pregnant friend’ itself is dedicated to both mother and child, and mentions my being a support person at the birth of another friend’s baby. But it seemed that, for this reviewer, lesbian = child-hating man-hating family-destroyer, despite all evidence to the contrary.

Bad reviews have been known to kill careers, sometimes via the writerly suicide of permanently giving up writing (or publishing). I stopped writing for a few months, then I picked up and went on, being essentially stubborn as fuck, and also having begun to suspect that something other than a desire to provide level-headed literary criticism had been the driving force behind that particular review. Since then, I’ve had more encouraging feedback: my second collection of poetry, The Ringing World (Puncher & Wattmann, 2012), has been reviewed favourably, I’ve been fortunate enough to receive Australia Council grants and my poems have been widely published, including in The Best Australian Poetry anthologies.

As a female writer, you’re already up against it, as readers of this site will be well aware. (The figures cited in the introduction to Women’s Work: Modern Women Poets Writing in English, on the proportion of women included in prestigious poetry anthologies, are both chilling and depressing.) Add queerness to that and you’ve got a double whammy (triple if you happen to be a queer woman of colour), where a reviewer’s idea of what ‘lesbian’ or ‘bi’ or ‘queer’ means and implies can prevent them from seeing – let alone thoughtfully critiquing – the writing that is actually there.

If you’d like to read some of Tricia’s work, you can find some poems from The Ringing World here. Ten poems, including some from Frankenstein’s Bathtub are here, while another couple have just come out in Verity La.