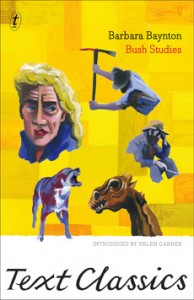 Spring has well and truly sprung here in classics-literary land with a lovely lot of reviews posted compared with the winter months. Those of you who read my round-ups regularly might think I focus inordinately in my posts on numbers. Of course numbers are only part of the story – but, since one of our goals is to increase the visibility of our authors, numbers do count, and I figure it can’t hurt to keep them before our eyes! Okay?

So, we had 35 reviews in September, with the following “top” numbers:

Three classics were reviewed this month. Jonathan Shaw (of Me fail? I fly!) reviewed Barbara Baynton’s 1902 collection of short stories, Bush studies. Shaw argues that Baynton’s stories about the bush “provide an extraordinarily powerful counterpoint to the legend of the 90s” as presented by writers like Henry Lawson.

Jennifer Cameron-Smith reviewed the third book, No Barrier, in Eleanor Dark’s The Timeless Land trilogy about Australia’s early colony. She has mixed feelings about the book, though she puts this down more to her expectations than to the author’s work. Indeed, she says:

If you are interested in Australia’s colonial history, then this trilogy gives a wonderfully detailed, nuanced picture of it. The good, the bad and the ugly.

Thanks Jennifer for reviewing the whole trilogy for our challenge. It’s great to have these significant classics covered.

The final classic is a non-fiction work, Robyn Davidson’s Tracks. It was reviewed by Lily, who thought it was an incredible journey but, like some of our previous readers, could not warm to Davidson.

In most months we see new releases being reviewed, as our readers tend to be quick off the mark. September was not unusual in this. However, I thought it would be worth highlighting this in a round-up.

One of this month’s new releases is also a debut novel, Melbourne writer Jenny Ackland’s The Secret Son. It’s a complex story about secrets and the truths that must out, and draws links between Ned Kelly in the nineteenth century and twentieth century Turkey. It was reviewed by Julianne, another of our GoodReads reviewers, who found it an accomplished debut, writing that:

Jenny Ackland has delivered an ambitious, rich narrative with “The Secret Son.” It bristles with detailed texture, vast scope, delightful plotting and a myriad of well-drawn characters.

The other three new releases are by established writers, Susan Johnson, Charlotte Wood and Geraldine Brooks. Two people reviewed Susan Johnson’s The Landing, Debbish and Robyne Young. Debbish said she hadn’t read any of Johnson’s earlier books and had mixed feelings about this one. The pacing was a little slow for her, but she liked the way Johnson handled describing her characters’ “introspection” well. She said she’d have liked more of this, for fewer characters. What drew her most to the book, though, was Johnson’s tone:

her wry tone and (occasionally sarcastic) observations were the most enjoyable part of the novel for me.

Robyne Young reviewing it for the Newtown Review of Books also liked the “introspection”, or what she called the “interior monologue”. Young liked the book very much, describing it as a book about the search for true love. She concludes her review arguing that:

Johnson is in control as she steers her wonderfully realised characters, and the reader, to a place if not of permanent safety, at least to a landing they can survive.

Charlotte Wood’s The Natural Order of Things received three reviews – by Brenda and Debbish, who are mentioned elsewhere in this post, and by our founder Elizabeth Lhuede. All three were completely bowled over by it. The book was inspired, Lhuede tells us, by Wood’s hearing about the “girls/women who had been rounded up and drugged, and carted off to a decommissioned prison at Hay in Western New South Wales in the 1960s”. However, instead of setting her story back then, she wrote it as “a near-future dystopia”. Here is its impact on Lhuede:

Such is the power of this book that after I finished it, immediately I searched for someone to discuss it with. I rang a friend who had been to the book launch on Monday night, hoping she might have read it already. She was only a few chapters in, but she told me a friend of hers, after finishing it, had rolled up in a ball on the floor and wept.

Our fourth writer, Geraldine Brooks, needs no introduction, I’m sure. All of her previous four novels have been reviewed here. And now her most recent one, The Secret Chord – more secrets! – has been reviewed by Brenda for GoodReads. Brooks writes historical novels, and this one is set in biblical times about King David. Brenda found it totally absorbing and described the writing as “superb”.

Challenge reviewers continue to support short stories – in the literary area, as well as in several of the genres, particularly speculative fiction and crime. I have already mentioned in this post, Barbara Baynton’s classic collection, Bush Studies. Also reviewed this month were Ellen Van Neerven’s collection Heat and Light (which won this year’s Dobbie Award) (by Kelly), her short story, “Sweetest Thing” in the Review of Australian Fiction (by me), and Marion Halligan’s Out of the Picture. As it’s been a while since I featured Halligan here, I’ll just focus on it for this post.

Published by the National Library of Australia, Out of the Picture is, says reviewer Debbie Robson, “an unusual book”: it combines eight short stories (i.e. fiction) and six essays (i.e. non-fiction), each inspired by a photograph that was selected by Halligan herself from the Library’s pictorial collection. Robson discusses her favourite pieces in the book, and comments that several of the essays draw from Halligan’s memories. She argues for the importance of recording personal memories – and highly recommends the book.