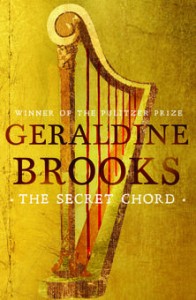 Hello everyone. The first month of spring but unlike Classics and Literary not a jump in reviews – just a steady 28, two more than for August. There were multiple reviews for books that have been recently highlighted – three for The Anchoress, four for The Beast’s Garden and three for The Secret Years.

Just a little biased but I was very pleased to see The Secret Chord by Geraldine Brooks reviewed this month. “A rich and utterly absorbing novel about the life of King David, from the Pulitzer Prize–winning author of People of the Book and March.” Brenda at Goodreads writes “The Secret Chord is a novel which totally absorbed me; the author’s writing is superb. (I was also intrigued with how this novel came about as she mentions at the beginning). I have no hesitation in recommending it highly, and am sure it will become another best seller for Geraldine Brooks.”

Moving ahead to the Elizabethan Age we have Jane Caro’s Just a Girl about the young Elizabeth I. Faith at Beyond the Dreamline was ambivalent about the book. “I don’t entirely agree with Caro’s perception of the princess, painting her as more insecure and less politically adept than I believe she really was.” However she did appreciate the focus paid to the incredibly complex relationship between Elizabeth and Mary.

Jennifer at Goodreads has finished The Timeless Land trilogy by Eleanor Dark and it was lovely to see  her review for No Barrier this month. Jennifer concludes, “I finished the novel wanting more, yet knowing that no amount of ‘more’ would really satisfy. If you are interested in Australia’s colonial history, then this trilogy gives a wonderfully detailed, nuanced picture of it. The good, the bad and the ugly.”

And now for something completely different we have The Peony Lantern by Frances Watts, set in Japan. “As a lady-in-waiting in a samurai mansion, Kasumi discovers a rare talent for art and falls in love with a young samurai.” Tien at Tien’s Blurb observes, “Kasumi is a wonderful heroine. Born as a peasant, she lacks education and yet, she has the natural ability of observation. Needless to say, this often gets her into trouble.”

Back in Australia 1838 we have Wild Lands by the prolific Nicole Alexander. Our nameless blogger at readroundoz writes “The clear and sometimes shocking differences that existed between the lives and cultures of the colonials compared to the Aboriginal people in the early 1800’s is so well told.” Brenda at Goodreads says “I thoroughly enjoyed the strength of character in Kate as she struggled to forge a life for herself without being dictated to by a man; the character of Bronzewing and his loyalty to Bidjia and Jardi was excellent. Wild Lands is a novel I have no hesitation in recommending highly.”

Fast forward 80 years and we have The Perfumer’s Secret is Fiona McIntosh’s seventh historical tale of romance. Set in the Provence region of France during World War 1, it’s a story of duty, secrets, love, family and perfume. Shellyrae at Book’d Out concludes, “An easy, engaging and pleasant read, The Perfumer’s Secret is a grand historical love story ideal for francophiles and romantics.”

For teenagers and younger readers we have Photographs in the Mud by Dianne Wolfer. “It is 1942 on the Kokoda Track in New Guinea. Jack and Hoshi are soldiers on opposite sides of the war, who meet in battle, discovering that they have much more in common than they had ever realized.” Louise at A Strong Belief in Wicker writes, “Photographs in the Mud grew out of Dianne Wolfer’s experience walking the Kokoda Track in 2002. Perhaps some of the most arduous research an author could undertake! It has been published in Japanese translation.”

Also set in World War II is Undercurrents by Tamara McKinley. “Still dealing with the aftermath of her mother’s death and her experiences of war-torn London, Olivia Hamilton discovers her own adoption certificate among her mother’s effects. She must travel to Australia to find out the truth about her birth.” Lildamek at Goodreads was a tad disappointed. “The book starts with a truly engaging story of a shipwreck but from here the book starts to dwindle as we move to post WWII Australia. I am a fan of Tamara McKinley but I found this book quite slow.”

I’m finishing with a book that I really must read – The Golden Age by Joan London. “It is 1954 and thirteen-year-old Frank Gold, refugee from wartime Hungary, is learning to walk again after contracting polio in Australia. At the Golden Age Children’s Polio Convalescent Hospital in Perth, he sees Elsa, a fellow-patient, and they form a forbidden, passionate bond.” Kelly at Orange Pekoe writes “This is a very thought provoking novel. I hadn’t ever considered the polio epidemic so I found that really interesting, particularly how each polio patient has their vivid ‘onset story’. The additional layer to the story about Frank’s family being migrants from Hungary and their experiences both in Europe and Perth really added an extra dimension to the story telling.”