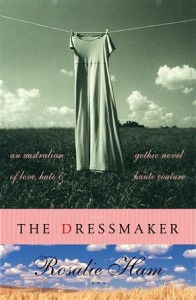 Well, we’re a bit down this month in numbers. Only 17 reviews of 16 different books. It’s strange but with less reviews you think it would be easier it choose but it’s not the case this month. I’m struggling a tad.

With the movie currently showing it’s hard to avoid the very original The Dressmaker by Rosalie Ham, “a darkly satirical novel of love, revenge, and 1950s haute couture.” Brenda at Biblionetworker observes: “The style of writing in this novel is very visual, particularly with the descriptions of Tilly’s fabrics and dressmaking accomplishments. It is a wonderful story, with larger than life characters, and it is going to make a gorgeous film.”

Moving backwards in time we have Kate Morton’s latest,The Lake House. “In the 1930s Alice’s younger brother Theo disappears during a Midsummer’s Eve party at their estate, and is never seen again. The family leave Loeanneth (the lake house of the title) and never return. Alice grows up to become a crime writer, and seventy years later, Detective Sadie Sparrow stumbles across the cold case.” Tracey from Carpe Librum writes: “The story unfolds from multiple points of view, as we hear from Sadie, Alice and Alice’s mother Eleanor. The result is a rich tapestry of family, regret, guilt, love, grief and the weaving together of secrets to form an intriguing mystery.”

Set in 1925 is Swimming Home by Mary Rose MacColl. “Fifteen-year-old Catherine Quick longs to feel once more the warm waters of her home, to strike out into the ocean off the Torres Strait Islands and swim, as she’s done since she was a tiny child. But with her recent move to London where she lives with her aunt Louisa, Catherine feels that everything she values has been stripped away.” Shellyrae at Book’d Out concludes: “Set in an interesting period, with complex characters and a thoughtful story, Swimming Home is a finely written, poignant and pensive, but ultimately uplifting novel.”

Still in the 20th century we have Rush Oh! by Shirley Barrett. “Set on the South-East coast of Australia, amid the small town communities of Eden and Kiah in NSW, Rush Oh! is the story of the Davidson family and the ups and downs of the memorable whaling season of 1908.” Our reviewer at Bookishness says, “Rush Oh! is a first novel for writer/director/filmaker Shirley Barrett, and her filmic sensibilities definitely show through in this quirky whaling story. The descriptions of both place and people are vivid and at times immensely humorous – by the end of book I had developed a real fondness for narrator Mary and her stoic ‘must get on with things’ attitude towards life.”

Leaving the 20th Century behind we travel back to the 1880s with The Secret Son by Jenny Ackland. “An Australian historian determined to find the truth, a stolen inheritance, a wishing tree, a long-lost grandmother, and an unlikely sweetheart.” Sounds like a fascinating mix. Michelle at Newtown Review of Books concludes: “The Secret Son is a charming and inventive first novel that flirts with history without ever letting facts get in the way of what is essentially a great story…”

Brenda from Goodreads writes: “Ella by Aussie author Virginia Taylor is a historical romance set in 1866 Australia – it was the life of the author’s grandmother which prompted the telling, and (amongst other things) it details how hard women worked during the settlement of the Australian colony.”

There’s 150 years covered in historical fiction for you. Which decade do you fancy? I’ll look forward to finding out next month.