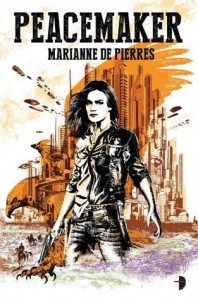 Hello faithful readers and welcome to another round up of speculative fiction. We haven’t had too many reviews this past month, maybe because of various end-of-year pressures. Incidentally, the indisputable queen of reviews this month has been Ju Transcendancing, who submitted four reviews in the past month. First up was Marianne de Pierres’s Peacemaker series. Ju Transcendancing reviewed Peacemaker, the first book, which she enjoyed very much. She writes:

I love that the futuristic landscape is recognisably Australia, and yet also seems to be so very alien as well. So close and yet so far is the only way I can describe it; everything is just within the boundaries of recognisable so it doesn’t seem like it could possibly be that far away – but the societal and environmental consequences create a cognitive dissonance because such vast changes don’t seem possible in any kind of short time frame. The effect discomforts the reader even as it draws them deeper into the intricate storyline.

In fact, she enjoyed it so much that she also read and reviewed the second book, Mythmaker, which she also enjoyed. Next up we had Carolyn reviewing An Ordinary Epidemic by Amanda Hickie, a “mundane science fiction” book about a plague as the title suggests. Carolyn enjoyed it, writing:

This is a really thought provoking account of an epidemic asking the reader to reflect on what they would do if/when such an epidemic hits our shores. At what point would you stockpile food, stop going to work, keep your kids home from school, barricade your house and refuse to have any contact with visitors and neighbours? Where do you draw the line between compassion for others and protecting your family? It also raises questions about how our modern world would function with a loss of essential services, media, internet, electricity, water. Would you be ready? Starting with urban fantasy, we had Ju Transcendancing reviewing Leopard Dreaming by AA Bell. Her review is quite short and it is the third book in the series, so I won’t excerpt it here. Suffice to say she enjoyed the book and the entire series, which starts with Diamond Eyes.

Another short review of a third in an urban fantasy was Bedding the Dragon by Rinelle Grey, reviewed by Brenda. Those of you playing along at home, may remember Brenda’s recent reviews of the earlier books in the series. She has continued to enjoy the series, giving this book five stars.

Tagging it as fantasy and romance, Elizabeth Fitzgerald reviewed The Captive Prince by CS Pacat. Apart from enjoying the well-paced read, Elizabeth made this observation, which I think is worth highlighting: On to more traditional BFF (big fat fantasy). We had two reviewed of Juliet Marillier’s Tower of Thorns, the sequel to the Aurealis Award-winning Dreamer’s Pool. Both Glaiza – Paper Wanderer and Elizabeth Fitzgerald enjoyed it. According to Elizabeth, even though it is part of a series, Tower of Thorns stand alone well. Glaiza wrote

One of my favourite parts of the novel is Blackthorn and Grim’s slow blossoming awareness of how they are forging a new life. Marillier’s protagonists develop through questioning assumptions, confronting past experiences and growing from new ones. It seems like both Blackthorn and Grim are slowly healing. I love this because I champion these characters. Bring on the next book of their adventures! Finally, we had a review of Kate Forsyth’s The Beast’s Garden by Ju Transcendancing. She loved it, writing, as part of a lengthy review:

The Beast’s Garden is one of my best books of 2015. This book is superbly written, deeply researched and provides insight into a time in history that is both complicated and horrifying. … Although I tried to discipline myself to not read it before going to sleep at night, I honestly couldn’t put it down once I started, it was so compelling.

And that’s all for this month. Stay tuned for next month and in the mean time, keep reading and submitting your reviews.