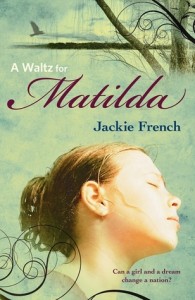 Welcome to another Non-Speculative Young Adults Round Up! As we’re approaching the end of the year, it’s great to see reviews of some fabulous books. Maybe there’s a present idea or two hiding for you in here!

Brenda reviewed The Good Daughter by Honey Brown, a novel set in rural Australia about two young people from very different backgrounds, brought together by a mystery which hit too close to home. Brenda found it a bleak and frightening coming of age story:

“The descriptions of a rural outback town, the surrounding countryside, the old, run-down homes and the small town school were evocatively portrayed – I could see it all; I lived there a long time ago!” There was some interest in Australian history over the past two months with both a fiction and a non fiction book reviewed. Jemimah reviewed Jackie French’s A Waltz for Matilda. Matilda, a young girl living in an unnamed Australian city is forced to move to a tiny remote town. Through a series of events she finds herself building a life and community, against a background of historical change in Australia.

“A Waltz for Matilda is a well-written young adult novel that blends fiction and historical fact into a highly readable and memorable novel. French’s use of landscape and history paint a rich picture of a young woman and a young nation forging a life and a future from a stark and ancient landscape full of secrets.”

Rochelle reviewed We Are the Rebels, an abridged young adult version of Clare Wright’s award winning The Forgotten Rebels of Eureka. She mentions that she wasn’t particularly interested in Australian history during high school, but might have been if it had been presented like it was by Wright:

“Clare Wright has done an amazing job of presenting the women and men who made Eureka. She has painted a vivid picture of their lives, their struggles and gave us personal accounts so the figures become as real as they once were and made it feel as if we knew these people.”

The ‘Every’ series by Ellie Marney has popped up quite a few times in these round ups. Cassandra is the latest to review one of them, tackling the first book Every Breath. She was impressed (and amused) by the way the Sherlock Holmes connections were made in the story, with characters and readers being in on the jokes. She also enjoyed both the romance subplot and the way family dynamics were present in the story.

Cassandra also reviewed How to Save a Life by Lauren K. McKellar. Lia keeps her family’s struggles to herself, not wanting to be an object of pity. Instead she loses herself in her music and dreams of a bigger life in the future. Then Jase enters her life. Cassandra was particularly interested in the way the story handled flashbacks:

“Other parts of the story are told through the use of flashbacks (often via nightmares). These were masterfully handled. Sometimes if I’m more interested in one storyline than another, I resent books that jump between times like this, but these flashbacks were interested and gave just enough detail to keep you on the hook.” The only book with multiple reviews for this round up was Cloudwish by Fiona Wood. This is the story of Vân Uoc, a scholarship student at an exclusive school who balances a sometimes whimsical approach to life with her real life difficulties of balancing her home world and her school world. This is a multi-layered book which really struck a chord with reviewers.

Shelleyrae looked at how Vân Uoc’s home life impacts on her other worlds:

“… this is not just a story about a teen romance, throughout the story, Wood sensitively explores the experience of diversity in all its forms with a focus on socioeconomic, racial and cultural difference. Vân Uoc keenly feels the divide between herself and her classmates . . . Vân Uoc is also haunted by her parents experiences as refugees. Though she knows few of the details, her mother’s annual slide into depression suggests unimaginable horrors.

Other reviewers were struck by Vân Ouc’s connection with Jane Eyre. Glaiza wishes this book had been around when she was younger:

“Van felt like a friend who walked down a similar path of books and daydreams. As Van tackles another school year, she connects with Jane Eyre’s quiet fortitude and draws strength from Jane’s story in her choices to act when she feels compelled to. I wish I could go back in time to discover this book as a high school student. Cloudwish would have joined the ranks of books I constantly re-read as a teen.”

Sheree, meanwhile, was impressed by the way Wood incorporated the classic fiction into this contemporary book:

“Jane Eyre is Vân Uoc’s hero and muse. “What would Jane do?” is a refrain throughout the story, and lovers of Charlotte Bronte’s classic will love the way Wood weaves snippets into Cloudwish.”

“Cloudwish has everything: art, literature, sport, romance, queer best friend, familial expectations and conflict, race and class divides, ethics and philosophy all wrapped up in an engaging story. Plan to read in one sitting. Cloudwish is an impressive novel catering to middle school readers and upwards; it’s a masterpiece.”

thers hinting that I am supposed to ‘grow up’ at some point, YA novels continue to play a huge part in my reading life. This has served me well, when I became a teacher and was known for always having a book recommendation at hand. I’m currently enjoying the rich world of picture books with my three year old, revisiting some of my favourite authors and sporadically blogging over at Subversive Reader