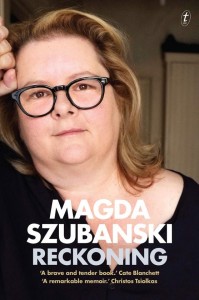 We do love our memoirs at the Australian Women Writers challenge!

Once again, memoir reviews by far outstrip the Biography and History reviews combined.

I featured Magda Szubanski’s Reckoning during the October roundup, so I will simply point you in the right direction for the two reviews that popped up this time for her extraordinary memoir (hopefully my review will also be here next roundup).

Shelley @The Newtown Book of Reviews At the house on the corner there were heady conversations about women and literature and the books that people were writing. In Modjeska’s case it was Poppy; in Helen Garner’s it wasThe Children’s Bach. Hazel Rowley was working on Christina Stead. They were productive days, but there was always plenty of time for parties, not to mention the next tempestuous liaison with a man of infuriating ‘Greenwich Mean Time’ certainties. Why, Modjeska wonders, did her generation of women, who had been given so much, make such a hash of it with men? Why, indeed?

Shelley’s only concern was around Modjeska’s writing style that captured the ‘spreading, weaving talk‘ that you do with close friends – the unprepared ‘might find yourself wondering occasionally where you are‘. Kate @Books Are My Favourite and Best gives us the self-deprecating, misery-memoir The Anti-Cool Girl by Rosie Waterland. Readers of the online blog, Mamamia will be familiar with Waterland’s work and style already.

Kate found some humorous, insightful moments and ‘gems of wisdom‘, but advises us that Waterland’s glib style about the horrific things that happened to her may not be to everyone’s taste.

Two of our regular reviewers agree that listening to memoirs by comedians is a great way to get your dose of memoir. Jonathan (above) listed to Szubanski read Reckoning and Louise @A Strong Belief in Wicker listed to Judith Lucy tell her story in The Lucy Family Alphabet.

Not everyone who experiences a challenging, difficult or harrowing childhood grows up to be a comedian, but most comedians seem to have had more than their fair share of childhood trauma. Lucy retells her story with her trademark laconic, self-deprecating style. few biographies from this roundup is about iconic French fashionista, Coco Chanel.

Those who follow Louise @A Strong Belief in Wicker will already know about her love of Paris and all things French. Australian fashion illustrator Megan Hess’ gorgeous little book was bound to tempt her!

Louise learnt a lot about the life and times of Coco Chanel, but found that no matter how interesting Chanel’s story was ‘the standout is Megan Hess’s wondrous illustrations. Megan has an iconic style all of her own.’ Jennifer gives as taste of the splendid the new biography about John and Sunday Reed. Modern Love by Lesley Harding and Kendrah Morgan is full of photographs and colour illustrations:

If you are interested in modernist Australian Art, in the lives of John and Sunday Reed, in the establishment and development of Heide Museum of Modern Art, this is a book well worth reading. It is a detailed and beautifully presented account of the remarkable partnership between John and Sunday Reed and their impact on modern Australian art. One of the reasons I love writing this roundup is for the discovery of new (to me) passions. This month it is Jessica who has sparked my fire with her glorious review of Georgiana Molloy: The Mind That Shines by Bernice Barry.

Georgiana and her story has not only inspired musicians, but also artists and writers. Miles Noel created a portrait of her for his series on Western Australian scientists, using artistic licence to slip a piece of Boronia molloyae (the only specimen named after her) into her hair. Libby Hathorn wrote a children’s historical novel, Georgiana, Woman of Flowers, while my first novel A Curious Intimacy was inspired by the research I did on Molloy for my Honours year in English literature.

Jessica acknowledges her bias in favour of this biography, but gives us ample reasons to pick up this book for ourselves. If nothing else, the beautiful cover should tempt you to discover more about the life of this extraordinary ’19th century West Australian botanist.’ ly, I will highlight one of my reviews from AusReading Month in November. Plain-speaking Jane by Jane Caro was a quick, easy read with surprising nuggets of truth.

All our ordinary lives are extraordinary because they are our lives.

We all have things to deal with, to get through, to survive.

We celebrate, we mourn, we make mistakes, we analyse, we learn, we fail, we try again, we love, we don’t, we move on, we get stuck, we change, we remember, we reinterpret, we reinvent, we go on.

It is this everyday ordinary life lived large that Jane Caro celebrates in her memoir as well.

And like all such stories there is always a moment when you go, “I didn’t know that!” or “who knew?”

If you would like to check out the other reviews not featured in this roundup, please click here.