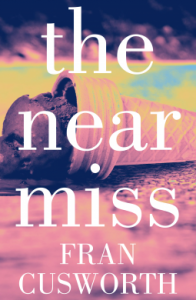 The Near Miss by Fran Cusworth

Grace, hardworking and tired, wants another baby. But she’s dealing with debt, a manic 4-year-old and a jobless husband determined to make his inventions into reality. Can they both get their way, or will competing dreams tear their marriage apart? Eddy analyses risk for a living, but his insecurities have brought his own life to a halt. He won’t let go of the flighty, unfaithful Romy, but will he ever risk believing in himself? Melody is trying to raise her son Skip in the city while holding true to her hippie lifestyle. But will past mistakes and judgement from other parents force her to leave her beliefs behind?

Cassie of Book Birdy writes “The Near Miss was exactly what I was looking for – contemporary fiction, written by an Australian woman writer, kind of in the Liane Moriarty vein.” “Truly representative of life, the characters in The Near Miss certainly had their share of issues. I enjoyed the writing in this book however I did not experience the highs and lows as I often do in stories. That said the book is very well written and thought out. ” says Jeanette of ReadRoundOz.

The Women’s Pages by Debra Adelaide

Ellis, an ordinary suburban young woman of the 1960s, is troubled by secrets and gaps in her past that become more puzzling as her creator, Dove, writes her story fifty years later. Having read Wuthering Heights to her dying mother, Dove finds she cannot shake off the influence of that singular novel: it has infected her like a disease. Instead of returning to her normal life she follows the story it has inspired to discover more about Ellis, who has emerged from the pages of fiction herself – or has she? – to become a modern successful career woman.

Michelle at The Newton Review of Books offers high praise, “Taking on a literary classic is by no means easy, but Adelaide emerges triumphant. Her novel-within-a-novel is a poignant, richly feminist tribute to Wuthering Heights that deserves a place beside it on the shelf. As captivating as it is irresistibly clever, The Women’s Pages is bound to have readers and writers alike nodding their heads in quiet recognition the whole way through.”

It is the winter of 1985. Hope Farm sticks out of the ragged landscape like a decaying tooth, its weatherboard walls sagging into the undergrowth. Silver’s mother, Ishtar, has fallen for the charismatic Miller, and the three of them have moved to the rural hippie commune to make a new start. At Hope, Silver finds unexpected friendship and, at last, a place to call home. But it is also here that, at just thirteen, she is thrust into an unrelenting adult world — and the walls begin to come tumbling down, with deadly consequences.

Wayward Fancy introduces her review thus, “At the outset I want to say three things: 1. that I dislike the prevalence for Australian novels to be heavily descriptive coming of age stories. 2. That “Hope Farm” could be described as a heavily descriptive coming of age novel. 3. That I thought it was brilliant.” Sam Still Reading concludes her review with, “I found myself racing through the book once I got past the first 50 pages as there’s so many interesting characters with stories to tell and is written in such a way that you can easily visualise the story. Highly recommended.”

Tears of the Cheetah by TM Clark

Mackenzie came to South Africa to escape the trauma of her past and build herself a bright new future: love is the last thing on her mind. But she’s finding it increasingly hard to ignore her feelings for the strong-minded Cole, who runs the game reserve for cheetahs just outside her town. Cole has made no secret of his feelings for her, but he realises that Mackenzie cannot be rushed so he is prepared to wait. However, neither could have predicted the terrifying events that are about to overtake them. When Cole saves Mackenzie from a vicious attack, it is only the beginning of an ever-spiralling maelstrom of violence. Someone is decimating Africa’s cheetah population, and when the poaching threat comes to their door, Mackenzie and Cole have only one option: they must fight to save the animals and life they love.

Brenda is enthusiastic,” Absolutely brilliant! Aussie author T.M. Clark has a winner with her latest release Tears of the Cheetah in my opinion. Spoken with authenticity (having been born and raised in Africa) her knowledge shines through. I could see the beautiful cheetahs; babies and adults alike. The countryside was painted in vivid pictures; the markets; the poor inhabiting the informal settlements; the constant risks – all told a believable story.”

The World Without Us by Mireille Juchau

It has been six months since Tess Müller stopped speaking. Her silence is baffling to her parents, her teachers and her younger sister Meg, but the more urgent mystery for both girls is where their mother, Evangeline, goes each day, pushing an empty pram and returning home wet, muddy and dishevelled. Their father, Stefan, struggling with his own losses, tends to his apiary and tries to understand why his bees are disappearing. But after he discovers a car wreck and human remains on their farm, old secrets emerge to threaten the fragile family. One day Tess’s teacher Jim encounters Evangeline by the wild Repentance River. Jim is in flight from his own troubles in Sydney, and Evangeline, raised in a mountain commune and bearing the scars of the fire that destroyed it, is a puzzle he longs to solve.  As the rainforest trees are felled and the lakes fill with run-off from the expanding mines, Tess watches the landscape of her family undergo shifts of its own. A storm is coming and the Müllers are in its path.

“It’s gripping but also gentle. It does not exhaust you or allow you to pull away, yet it is a subtle read, almost dream like in its lack of “speech” punctuation….It’s a book I will be reading again in ten years.” writes Meg at Manuscrapped

My name is Shelleyrae Cusbert I am a mother of four children, aged 9 to 19, living in the mid north coast of NSW. I am an obsessive reader and publish my thoughts about what I read at my book blog,  Book’d Out.  In 2012 I read and reviewed a total of 109 books for the AWW Challenge and in 2013 a total of 117 and 2014 a total of 102. I juggle caring for my family with a part time job and volunteer at both the town’s local library and the children’s school libr