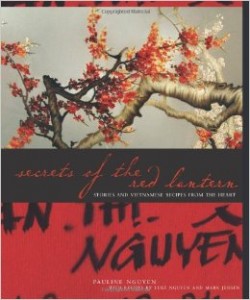 Oh, the holidays! This is the time of year that readers look forward to most: lying by the pool or the beach in a Christmas banquet coma with a stack of books, a glass of something icy to hand, and the shouts of people playing cricket or footy a dim echo in the background. Most of you will probably already have selected your books for your stack, but if you’re still casting around (there’s still three days in which to finish your AWW challenge if you’re working towards that!), below is a brief list of books reviewed over November and December which have either diverse characters or authors. Four of the books reviewed over November and December were by women with migrant backgrounds. As many of us have had food on our mind, it might be apt (or maybe not, for those with sore tummies!) to mention Brona’s review of Pauline Nguyen’s cookbook memoir, Secrets of the Red Lantern. Among the family photos and recipes, she writes, is the story of ‘Pauline’s immigration to Australia at a young age with her family after the war in Vietnam, to her early life in Australia, the importance of food in maintaining family connections and the opening of the first Red Lantern restaurant with her brother Luke and (now) partner Mark Jensen.’ Brona was also inspired to try some recipes, with excellent results.

Rosanne Dingli, originally from Malta and now living in Western Australia, is the author of How to Disappear. Reviewer Maureen enjoyed the plot twists and poetry of this novel, which is about a woman, her father and his post-war escape.

Another book about the legacy of war, Leah Kaminsky’s The Waiting Rome, was reviewed by Carol of Reading, Writing and Reisling. Set in Haifa in Israel, Carol describes it as ‘beautifully written, poignant, lyrical’, despite the gruelling subject matter.

Shannon of Giraffe Days reviewed Sarah Ayoub’s Hate is Such a Strong Word (scroll down her page for the review). While she enjoyed this coming-of-age story about 17 year old Sophie, a Lebanese-Australian, and thought it ‘gave a good, compassionate insight into those, like Sophie, who struggle with the gender roles assigned by her parents’ culture, and what she experiences outside the family home’ she found the book lacked subtlety, ‘as well as an engaging, sympathetic protagonist who endeared herself to me’, which was necessary as the book was propelled by character rather than plot.

Shannon also reviewed the second of Indigenous author Ambelin Kwaymullina’s The Tribe series, The Disappearance of Ember Crow. This follows on from The Interrogation of Ashala Wolf and follows the search for Ember, Ashala’s friend, who has disappeared. Shannon loves this series. It’s ‘riveting, engrossing, exciting, surprising, imaginative, intelligent and captivating. Can I squeeze any more adjectives into that sentence? I love the concept, I love the Aboriginal aspects and I love the world-building, but I especially love the characters’. Shannon’s response to these books is by no means uncommon – many readers for the AWW challenge have enjoyed Ameblin’s books, and they’re a really good place to start if you’re looking for a book by an Indigenous woman writer. It has seemed to me over the year that there have been more books reviewed by white writers that feature Indigenous characters, rather than books by Indigenous writers themselves. While it’s great that authors are acknowledging that Indigenous people in their works (I’ve done this myself in my books), it’s also really important to read what Indigenous people have to say. I’d love to see more reviews of books by Indigenous women writers in 2016, and if you’re planning your reading for next year, you might want to check out the selection of authors listed on our Diversity page.

Having said this, the four reviews of books which feature Aboriginal characters show that readers are aware of the tensions of writing an Aboriginal point of view. Sue of Whispering Gums reviewed Caroline de Costa’s crime novel, Double Madness, which features an Indigenous protagonist. Despite not being a crime aficionado, she really enjoyed this book.

Janine of Resident Judge penned an excellent review on Libby Connors’ Warrior, which won the Queensland Premier’s Award for a Book of State Significance. The book ‘challenges the simple classification of aboriginal ‘outrages’ as random, undisciplined and ultimately futile. Instead, she returns logic and agency to the indigenous tribal groupings in south-east Queensland during the pre-Separation days of the frontier.’ It is also ‘beautifully written and imbued with a deep sense of place. A map that appears in the opening pages shows indigenous places superimposed onto familiar Western towns and rivers, highlighting the co-existence of two competing senses of ownership.’ I’m definitely adding this one to my reading list for next year.

I reviewed Anchor Point, a debut novel by Alice Robinson, which I came across via Sue’s blog. A book that deals with the impact of climate change in Australia, I was glad it referenced Aboriginal people, who are crucial to any kind of discussion about land and its management.

Finally, if anyone is looking for a doorstopper to while away hours in a daybed on a verandah, you can’t go past Lucy Trelor’s Salt Creek. This story of the well-off Finch family whose fortunes sour in 1855. They are forced to relocate to the Coorong in South Australia, where the patriarch clashes with Ngarrindjeri people. The book, as reviewer Elizabeth writes, ‘subverts the typical white Australian pioneer story in interesting and complex ways.  Nothing in this fascinating and beautifully written story turns out as expected.’ Elizabeth also described it as ‘evocative, thoughtful and at times visceral work of literary fiction.  It is also a pacy read that kept me turning pages well past my bed time.’ Perfect summer reading!

This is the final monthly roundup for 2015. Shelleyrae will be back on 1st January 2016 with her annual roundup of contemporary fiction, followed by other genres throughout the month. Thanks to everyone who has participated in the AWW challenge this year and ventured into other lives, whether fictional or real, and shared your thoughts with us. We’ve really appreciated your efforts and input, and look forward to your literary company next year.