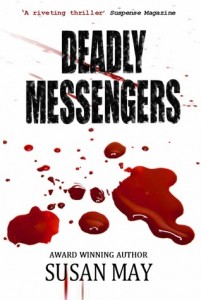 It’s been another quiet month, with, I’m guessing, people busy with end-of-year stuff. But we still had a handful of reviews submitted to the challenge. On the horror front, Carol@reading Writing And Riesling reviewed Deadly Messengers by Susan May, which sounds like a thriller with a bit of a spec fic twist. She writes:

Deadly Messengers is a page-turning thriller taking readers into the minds of mass killers in all their disconcerting madness. It poses the question: Is there a killer lurking inside everyone? The answer could prove more frightening than the crimes.

To start off the fantasy reviews, we have an unusual book that’s not quite a book: Attack of the Clockwork Army by Felicity Banks, reviewed by Elizabeth Fitzgerald. She had this to say:

It is the sort of story that rewards multiple readings. There were a couple of events that seemed somewhat arbitrary on my first time through but whose logic became evident when I followed other paths. Indeed, finding out what happens along those different paths was one of the biggest appeals to me.

Overall, I found it a novel reading experience for lovers of steampunk and adventure. Then I read and reviewed Of Sorrow and Such by Angela Slatter, a standalone novella set in the same world as her mosaic novels Sourdough and Other Stories and The Bitterwood Bible and Other Recountings. It’s a gorgeous read about women and outcast and magic. Highly recommended.

Never Forgotten does a good job as a “middle book” in that it transitions us from the discovery stories in the first two books to the set-up for the finale in book four. The pace is zippy, there is a respectable amount of kissing, and the touch of sci-fi tech is still my favourite part about this world. On a sort-of science fiction but more non-fiction front, Elizabeth Fitzgerald reviewed Letters to Tiptree, edited by Alexandra Pierce and Alisa Krasnostein. It’s a collection of letters from various people reflecting on the impact of James Tiptree Jr aka Alice Sheldon. Elizabeth writes:

When Twelfth Planet Press sent me a review copy of Letters to Tiptree, I admit I was a little apprehensive. I’ve not read any of the stories Alice Sheldon published under the names of James Tiptree Jr. and Raccoona Sheldon. I’m not even especially interested in science fiction spanning the late 60s and 70s–though I have felt some pressure to become familiar with this era of canon, much as Renay has commented. So I was a little bit surprised by just how much I enjoyed this book.

To finish off, I want to draw your attention to a few short reviews: