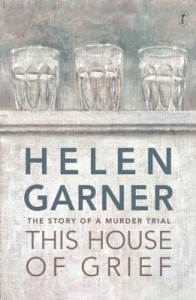 In 2015, there were 53 books read and reviewed by 56 authors and with a total of 81 reviews by 44 readers just in the non-fiction genre alone. Oh wow. Thank you.

This House of Grief by Helen Garner

Top of the pops for the genre with the most reviews was Helen Garner‘s This House of Grief. It haunted all those who picked it up as Garner took you through a murder trial – that of Robert Farquharson and the tragedy where he survived an accident that his three sons drowned in and the police suspected him enough to put him on trial for murder.

Carolyn of Carolyn’s Reviews notes that:

While showing us the human faces of this trial, the accused and his estranged wife, their families, the witnesses, the lawyers and judges Garner takes us through the anatomy of a criminal trial. She carefully describes the way in which evidence is given by witnesses and picked apart by the lawyers with the microscopic examination of tiny details often taking up long stifling days. She further shows us the human side of the trial as she watches the unspoken interactions between the accused and his family, listens to the banter and opinions of the journalists and observes the jury’s response to the witnesses and evidence.

Cassie at Book Birdy is very upfront about who should pick this book up, who could handle reading this book:

For anyone who likes to be challenged in their reading, and for those who read in order to gain insight about what it is to be human.

‘Challenged’ is a good word to use when reading Garner‘s work. It is difficult to read her not because her work is hard to get into or understand but because it does challenge your preconceived ideas and challenges you to think differently and it is very no holds barred, unapologetic and brash about how it does so. Janine Rizzetti states this quite clearly in her review of This House of Grief:

Helen Garner seems to evoke strong reactions in her readers. I don’t think that it’s just that she chooses controversial topics: I think that it’s Helen Garner herself that some readers object to.  As for me- I wish I knew her, although I suspect that she’d bridle against the thought that she could be claimed by a reader, and I think I’d feel a bit intimidated by her. I like the way that she puts her head on one side and considers hard…but then comes to a decided opinion.  I like her occasional tartness and her willingness to revisit her own judgments. So barring murder trials what else did we read for when looking for stories that didn’t act as a mirror to real life but instead allowed us window to look in or out on it? We seemed to be looking for books that spoke about what makes us human – this often somewhat intangible undefinable thing that seems to differentiate us, in our minds at least, from other species. And so we chose to read and review Christine Kenneally‘s The Invisible Human Race which came in second to Garner for most reviewed with four reviews.

We were intrigued by the idea that there actually might be things apart from our DNA and everything associated with our biology that we might just pick up from our ancestors and Kenneally explored this idea in great depth and the curiosity made everyone else tag along with her, probably hoping to finally have solid proof that we could blame our less liked habits on our family heritage.

Michelle Scott Tucker of Adventures in Biography found the book to be so full of interesting ideas about how the explosion in DNA knowledge and that of family history has entwined together over the years that she started giving copies to friends. Which is always the kind of awesome move we want to see happen when someone reads a book.

Lucid.  Fascinating.  Intriguing.  Compelling.  This is a book I read late into the night.  Then at the breakfast table and then later in the parked car while waiting to collect the kids.  I feverishly pressed copies onto friends.

Why should we care about the past, our history, our genetic heritage and then also possibly the ideas, the notions, the habits, the traditions we also passed down through our family culture? Why should we care about how family history and researching it and the issues around genetics and DNA are being managed today? The answer is complex and the book provides it as Marion Elizabeth Diamond of Historians are Past Caring points out:

Kenneally deals cautiously and well with the inevitable issues of race and eugenics, but other controversies hadn’t occurred to me before: What are the implications of so much data (either genetic or genealogical) being held by private companies like Ancestry.com or 23andMe? What happens to that data when a company is sold?

And it does make you want to act as Angela Long of Welcome To My Library found when she read and reviewed the book:

Today the history of the past is more relevant than ever before and the collection, storage and use of this information fraught with social and moral implications. Christine Kenneally has taken an enormous and heavy subject, and made it accessible and fascinating. Before I was half way through I couldn’t wait to start pulling apart my own DNA and discovering the knowledge locked inside.

As for the reader and reviewer that dominated the non-fiction genre in 2015, that accolade goes to Mel at The Subversive Reader who read and reviewed four non-fiction titles including: Chrissie Swan‘s Is It Just Me? Confessions of an Oversharer; Alexandra Pierce and Alisa Krasnostein‘s Letters to Tiptree; Anita Heiss‘ I’m Not Racist But… and Annabel Crabb‘s The Wife Drought.

Thank you to all those who read and reviewed non-fiction in 2015. If you are reading in any genre, you are supporting the writers because without you who would read all these words? And when you review, you allow others to be aware that those words, these ideas, exist so thank you and please continue doing so and then letting us know that you have done so.

Australian Women Writers will continue in 2016 so please make sure you go sign up and this year we may get to play bingo as well! And if you prefer windows to mirrors or you want to include non-fiction work in what you read, you can use our book search page to take a look at the titles we read and reviewed in 2015 and other years so you have a place to start from. This year I hope to be far more on the ball than I was last year and round up what you have been reading every two months in the non-fiction genre.