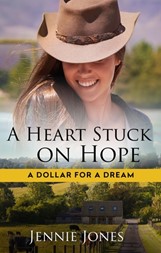 Welcome to the February roundup of romance, romantic suspense and erotica. Despite being the shortest month, we had loads of great reviews in these genres! 21 books were reviewed and we had a total of 33 reviews. Reviews were for a wide range of subgenres, with rural romance showing no signs of losing popularity. We also had some YA, fantasy and category romances reviewed. It just goes to show how diverse romance and erotica is!

Once again, Brenda was our top reviewer with 8 reviews. Elizabeth Fitzgerald and Bree had 4 reviews each. Well done ladies, and I’m certain you had many reviews in other genres too!

Brenda enjoyed Jennie Jones’ A Heart Stuck on Hope (part of the Dollar for a Dream series), saying:

“I have previously loved all of Jennie Jones’ work and this one didn’t disappoint either”.

“April’s Rainbow is a really beautiful story exploring terrible grief but from a very interesting perspective which sets it apart. It’s heartbreak and love, despair and fragile hope that packs an emotional punch that will stay with you.”

Elizabeth found the heroine of Anna Campbell’s The Seduction of Lord Stone to be realistic:

“For such a passionate person, Caroline was ruled by her head a lot more than I would have expected. She has very definite ideas about the way things need to be and is determined to stick to that, even if it means she ends up getting in her own way a lot. I found that quite realistic.”

Our most popular book for February was Georgina Penney’s Summer Harvest with four reviews. Dark Matter Zine described it as:

“Summer Harvest is an enjoyable, well-written novel with an engaging romance and characters who explore issues around cancer. I highly recommend Summer Harvest to romance readers and people whose lives have been touched by cancer.”

Marcia @ Book Muster Down Under also enjoyed the story:

“I think what I enjoy most about Georgina’s novels are that her subject choices are almost always close to real life and her characters so three-dimensional that they appear to be plucked right out of our own world. I related to Beth on so many levels, but one of the things that really got me going was her fear of Australia’s “dangerous animals” because I, myself, had the same fears before we immigrated to Australia and I couldn’t help giggling each time she encountered one of our lethal creatures and I became privy to the confusion in Clayton’s mind.”

We also had some category romances reviewed in February – Jess @ The Never Ending Bookshelf found Annie West’s Seducing His Enemy’s Daughter a powerful read, showing that category romances aren’t something to dismiss:

“I finished this book a couple of weeks ago, and despite reading it one sitting, I still find myself at a loss of words to express just how magical and romantic it really is. This book is nothing short of inspiring; packing a pretty brutal emotional punch of both the fiery demand of the Sexy line but also a the soft and gentle caress of a sweet romance that blossoms into something more worldly and all encompassing than one could every imagine. I’m just still in awe of it in many ways. The emotion and conflict (both internal and external) floored me with this narrative. Not only was I there vividly with these characters, but I was feeling every ounce of emotion they were: guilt, shame, anger, elation, passion, desperation, pain, gut wrenching sorrow and lastly love.”

Michelle @ Beauty and Lace enjoyed Kings Rising, the last book in the Captive Prince trilogy by C.S. Pacat, suprising her with some extra twists:

“The story was compelling and there is always something happening. I would have thought that with all that has happened there would be very few plot twists that could surprise me but Pacat managed to pull out a couple more just to keep the tensions high. There were some revelations that didn’t really surprise me, the writing was on the wall, but the cunning and the depths of betrayal still had the power to shock me.”

Thanks to everyone who took the time to read an Australian women writer and share a review in February. Until next month, keep reading!

About me: I’m Sam, of Sam Still Reading. In between working, studying and organizing far too many things, I love to read and share my book reviews on my blog of six years. Reading is one of my favourite ways of relaxing and I’m always up for a book recommendation or three.