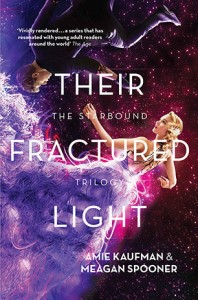 We had quite a lot of reviews over the past month. Twenty-two books were collectively reviewed thirty times. Well done, everyone! Since my last round-up post, we’ve had shortlists announced for the Aurealis and Ditmar awards, and I’m wondering if that prompted people to catch up on some of their Aussie reading. (If you’re interested, you can see both shortlists here.)

To kick us off, in genre and alphabetic order, Brona’s Books reviewed Special by Georgia Blain, a near-ish future story set in a world where genetic modification is the norm and everyone is defined by their datastream. Their Fractured Light by Amie Kaufman and Meagan Spooner is the exciting conclusion to the YA trilogy that began with the multi-award-winning These Broken Stars. Shaheen @ Speculating On Specfic and I reviewed it, with Shaheen writing:

I am a huge fan of this world, and of the six brilliant individuals who helped save it. I have enjoyed every page, every moment, of my journey in the Starbound world and am sad to see it go. But Kaufman and Spooner promise that this is not the end of their joint ventures but only the beginning, so I’ll be eagerly awaiting any and all future collaborations between these two talented authors.

Needless to say, we both loved it.

Squid’s Grief by DK Mok is set in a futuristic city, features a car hacker and has an excellent title. It was reviewed by Stephanie Gunn, who wrote: The background of Baltus City is extremely vivid, and it’s fun following Squid and Grief around it, from the poorest slums to the richest apartments.  All of the minor characters were brilliant, and Mok writes most of them in such a way that it really seems as if you’re getting a glimpse of only a part of their greater stories.

Not exactly science fiction, but an homage to a science fiction author, Letters to Tiptree, edited by Alexandra Pierce and Alisa Krasnostein, was reviewed by Glaiza – Paper Wanderer. She recommended it for International Women’s Day and wrote:

After I finished reading Letters to Tiptree, I was struck by how the impression of Tiptree’s brilliant stories and the story of a writer can comfort and/or inspire. Both Tiptree’s writing and presence had a huge impact on the SF community.

I really enjoyed reading the wide range of letters presented in this collection. I appreciated the inclusion of the critical essays at the end. The sampled correspondence between Ursula K. Le. Guin, Joanna Russ and Alice B. Sheldon/James Tiptree, Jr was another great contextual addition. On the horror front (whoo! A horror review!) Perfections by Kirstyn McDermott was reviewed by Kristian Thoroughgood, who writes:

What I can say is that the writing is slick, well-paced, excellent. It’s easy to read yet still maintains a strong sense of building eeriness and wrongness.  I called this a ‘lighter-horror’ novel earlier, and by this I mean it isn’t blood and body count from beginning-to-end; rather it is more atmospheric and moody as the sisters work their way through the secrets and betrayals. A character driven tale in a more dark-fantasy vein.

Paranormal detective novel Missing by Melanie Casey (the third Cass Lehman and Detective Ed Dyson book) was reviewed by Carolyn and Tracey Carpe Librum, both of whom enjoyed it. The story follows a psychic detective who can see the last minutes of a dead person’s life. Sounds interesting! On a similar(ish) note, Amy Brownlee reviewed Almost Dead and Dead, Actually by Kaz Delaney. They are companion YA books and feature ghosts as the speculative element. Of Dead, Actually, Amy writes:

There was also Jools‘s review of The Clairvoyant’s Glasses by Helen Glotz, the protagonist of which inherits her clairvoyant aunt’s (no points for guessing) glasses. Jools writes:

I thoroughly enjoyed this unique story and sincerely hope there will be a follow up book because I would love to read more about these characters, they are all so well developed with strong personalities that make you want to know more about what happens in their future.
This would make a great series. Brenda, meanwhile, has continued her reading journey through Rinelle Grey’s paranormal romance Dragon Ruins novella series, this month reviewing the sixth book in the series, Mating the Dragon. She continues to enjoy the series.

Back on the YA side of things, Michelle-Beauty and Lace reviewed Scent by Juliet Madison, a YA story about a group of psychic sisters. She had this to say about it:

The books are written with humour and there are some definite laugh out loud moments, there is also romance which in this one was a little all over the place with Sasha’s three different admirers. The mystery was actually very skin crawly for me in the end but certainly enough to be compelling trying to work out where it was all going. More post-apocalyptic science fantasy than urban fantasy (but I don’t want to make a separate heading), there was Captive, a novella by Amanda Pillar set in the same world as her novel Graced, but at a much earlier point in time. Stephanie Gunn, Elizabeth Fitzgerald and I reviewed it, with Stephanie writing:

Pillar’s strength in Captive, as in Graced, lies in her characters.  Even in this shorter length, all of them are well-developed and have distinctive voices.  We only see Quin through diary excerpts, and even his voice stands out (and those entries may have made me chortle more than once).  All of the characters are strong, and all are intelligent, most especially Laney with her medical and scientific knowledge.  There are no damsels in distress here, no women waiting to be saved. Leading the BFF charge we have two reviews of The Lyre Thief by Jennifer Fallon, the first book in a new series set in the same world as the Demon Child Trilogy and the Hythrun Chronicles. Elizabeth Fitzgerald and I both reviewed it, with it being the first Fallon book Elizabeth has read, whereas I’ve read all of them. Elizabeth had this to say about it:

Of course, it’s the characters that really make the story. This is not one of those gloomy epic fantasies where the characters are all horrible people being horrible to each other for the sake of being “gritty” or “realistic”. For the most part, I rather liked the characters (with a couple of exceptions) which made it easy to be interested in what was happening to them. This meant that I wasn’t waiting impatiently for it to get back to a certain character, even though I still had a couple of favourites. However, this does not mean the characters were without their flaws. Almost without exception, they are looking out for their own interests and act selfishly. In most cases, it is balanced out by genuine love and affection for at least one other person.

Tower of Thorns, the second in the Blackthorn and Grim series by Juliet Marillier, was reviewed by Teenawriter, who hadn’t read the award-winning first book in the series but declares that Tower of Thorns works when read first. Good to know! Kings Rising by CS Pacat was the unequivocal popularity winner this past month, with five new reviews coming in. It’s the third book in the Captive Prince series and was reviewed by Elizabeth Fitzgerald, Ellen Gregory, Coffee2words/Lynxie, Bree @ 1girl2manybooks, and Michelle-Beauty and Lace. Lynxie had this to say about it:

Pacat’s writing style is something of sheer beauty. It is simultaneously complex and yet utterly simplistic when it comes to understanding it. The layers of foreshadowing and deceit tangle together and create a cover of sorts over the fragile, yet fierce romance plot. I am in awe of it. We had a few books that don’t quite fit into the above genre divisions, so they can have their own category. First off was the post-apocalyptic fantasy The Interrogation of Ashala Wolf by Ambelin Kwaymullina, which was reviewed by Heather Ewings, who is looking forward to picking up the second and third books in the series.

There was also Razorhurst by Justine Larbalestier, a historical urban fantasy set in 1930s Sydney and featuring ghosts, which was reviewed by Jennifer Cameron-Smith and Mark Webb. Mark writes:

One of the things that really struck me about Razorhurst was the authenticity of the writing. The novel is set in Sydney Australia in the 1930s, and the story has a verisimilitude that leaves the reader with the impression that Larbalestier undertook a hell of a lot of research. Also containing historical fantasy (and also futuristic fantasy), is Love and Romanpunk by Tansy Rayner Roberts. This is a short collection of four Roman-themed and supernatural stories. Stephanie Gunn reviewed it, writing this:

Overall, this is another brilliant installment in the Twelve Planets.  Roberts knowledge of Roman history is threaded through a vivid alternate history filled with amazing characters, especially her female characters (though it has to be noted that her male characters are just as capable, so long as they’re not mad emperors).  I fell in love with this world, and I really hope that Roberts returns to it, hopefully with a novel-length sequel to Last of the Romanpunks.  Please?

Not at all similar to the other books in the section (or any other section) there is Sourdough and Other Stories by Angela Slatter, which I reviewed. This is a mosaic novel of linked short stories all set in the same world (which is also the same world as The Bitterwood Bible and Other Recountings). I love Slatter’s gorgeous writing style and how women-centric her stories are. I can’t recommend her writing enough. Finally, Zeroes by Scott Westerfeld, Margo Lanagan and Deborah Biancotti (two out of three of whom are AWW) is a YA superhero novel. Mark Webb reviewed it and had this to say:

There was a good focus on diversity in the novel, with a good gender balance amongst the protagonists and a mix of ethnicities and a disabled character. The novel isn’t preachy about diversity, but I’ve really been enjoying work that portrays a wide range of characters without making a big deal of it, and this book definitely fits that description.

Tsana Dolichva is a Ditmar Award-nominated book blogger who has been reading and enjoying Australian speculative fiction since she first started reading “grown up” books. She blogs her book reviews over at the creatively titled Tsana’s Reads. Along with Holly Kench, she is editing Defying Doomsday, an anthology showing that people with disability and chronic illness also have stories to tell, even when the world is ending (out in a few months). In her spare time she works on her astrophysics career.