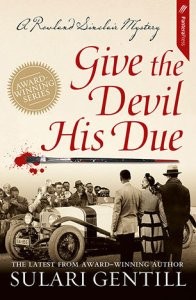 A very happy Easter to all our readers! I hope you’ve delved into some pages and relaxed, whether on the couch with chocolate and a cuppa, or in a camping chair with some lightly-burnt hot cross buns.

AWW readers powered into 2016 with their reviews of works featuring diversity. Leading the charge were books by women writers of ethnic heritage, of which some 10 were reviewed. Karen of the Newtown Review of Books reviewed the novels in Sulari Gentill’s Rowland Sinclair series, which follows the moves of the youngest member of a squattocracy family across Australia and into Europe following the outbreak of World War Two. The most recent book in the series, Give the Devil His Due, like its predecessors, ‘combines humour, sadness, thrills and spills with entertainment and a spot of education along the way’.

Other writers for the Newtown Review of Books include Linda Funnell, writing on academic Shakira Hussein’s From Victims to Suspects: Muslim women since 9/11. This book ‘engages with the complexities of gender, race, and cultural identity and how they impact on the West’s relationship with Muslim women.’ For example, in the case of Malala, who was shot by the Taliban for her pro-education stance and later photographed with US officials, ‘support for Western concepts of civil rights or gender equality can become support for the enemy who is bombing your country’. This book is welcome when so much of Australia’s political conversation flattens the nuances of Muslim identity (as, I guess, it does with most things).

A handful of readers reviewed works by writers with a migrant background. Sue of Whispering Gums picked up Halina Rubin’s Journeys with my Mother, which charts Rubin’s Jewish family’s flight to the Soviet Union at the outbreak of World War Two, then back to Poland, then Israel, then finally Australia. Sue describes how difficult it was for Rubin’s mother to tell this story, and how this impacted on the form of the work.

Kim Kelly’s Wild Chicory is account of how she became a writer and was influenced by the stories of her Irish forbears, who moved to Australia for a better life. Her book was reviewed by Kylie Mason, who writes, ‘Readers will be swept up by the cracking immediacy of the prose, as though they’ve been welcomed into a raucous Irish home and sat by the fire to be plied with entertaining tales and a hearty meal.’ What a great recommendation! Julie of GoodReads had a similar experience – as she read she was ‘transported to Grandmother Nell’s kitchen and could almost smell the yeasty bread as she removed the freshly baked loaves from the unique pipe shaped tubes which they were baked in.’ Yum!

There were six reviews of books by Indigenous women writers. Three of these were for Larissa Behrendt’s new nonfiction book, Finding Eliza: Power and Colonial Storytelling. This book investigates the stories surrounding Eliza Fraser, a white woman shipwrecked off the Queensland coast in 1836 who was rescued by the Butchulla people. Behrendt uses this incident to examine the power of storytelling and, as Yvonne of Stumbling Through The Past writes in her excellent review, ‘as a launching pad to examine attitudes that are embedded in colonial literature.’ Stories are told for different reasons, and some have more power than others, and many have been used to reinforce particular attitudes to and ideas about Indigenous people. Michelle of Adventures in Biography also enjoyed the work, commenting that ‘Behrendt’s prose is always readable and sharp, never getting bogged by complexity at the expense of clarity’.

I had come across the Eliza Fraser story when reading and researching Patrick White’s Fringe of Leaves, as well as Indigenous author Jeanine Leane’s excellent essay on this novel, which covers similar themes to Behrendt’s. I’ve added Finding Eliza to the top of my TBR pile.

Larissa Behrendt’s novel Home, about the intergenerational trauma of Indigenous people, was reviewed on GoodReads by Anna. Although she found the writing uneven in places, in others she thought it was strong and moving.

It was good to see novels by popular Indigenous authors Anita Heiss (Tiddas was reviewed by Carolyn of GoodReads) and Ambelin Kwaymullina (The Interrogation of Ashala Wolf was reviewed by Heather Ewings) being picked up as well. There was much excitement about the release of queer writer C.S Pacat’s final novel in her Captive Prince trilogy, Kings Rising, and near-universal praise for both the book and the trilogy itself. Even readers who didn’t habitually pick up m/m romance found they enjoyed the relationship between the two male characters. Ellen Gregory wrote ‘Pacat’s writing is wonderful. It manages to convey deep emotional connection and love and fear, while being fiercely restrained’, while others were relieved that Pacat pulled all the threads of the trilogy together. ‘All of the groundwork laid came to wonderful fruition’, wrote Bree of 1Girl2ManyBooks, while Elizabeth of Earl Grey Editing thought the ending had ‘a wonderfully poetic symmetry’. Others, such as Michelle of Beauty and Lace, were impressed by the character development throughout the series, as she writes, ‘Kings Rising ties up a lot of the threads and helps us to understand Laurent in a way that we hadn’t previously. We gain an understanding of him but we also see great growth and change in him. The Damen and Laurent we met in Captive Prince are almost unrecognisable in the leaders of men that arrive at Ios to make a stand.’

Other books which included reviews of LGBTI characters included Justine Larbaliaster’s My Sister Rosa. Nalini of DarkMatter Zine writes that this book ‘includes the most beautiful representation of queerness in a few of its forms: parents in love, teen love and a gender-ambiguous person.’ It was a psychological thriller to boot, which kept her turning the pages.

It was also good to see careful and considered reviews of two books which focused upon disability. Emma Viscik’s Resurrection Bay, a crime novel with a deaf protagonist, was reviewed by Bernadette of Fair Dinkum Crime, while Janine of Resident Judge penned her thoughts on Biff Ward’s In My Mother’s Hands, an account of the mental illness of Ward’s mother.

Next month we have a focus on Australian women writers with disability, with guest posts from four authors, and it will be great to hear their perspectives on writing and disability.

I haven’t included all of the reviews focusing on diversity here, but if you go to our search page and put ‘diversity’ in the keyword box, you’ll find a smorgasbord of things to read! On that note, enjoy the remains of your Easter chocolate, if there’s any left …