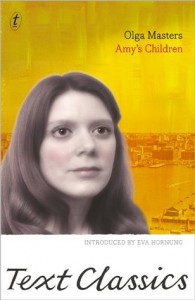 This March, as has now happened four years in a row, saw significantly more reviews being posted for the challenge than in the previous two months. Go March! My favourite month of the year! Joking aside, the main news for the month was the announcement of the Stella Prize shortlist. In my February report I noted that our challenge participants had reviewed 11 of the 12 longlisted books, and hoped that the twelfth, Fiona Wright’s book of essays, Small acts of disappearance, would be reviewed for us, whether or not it made the shortlist. Well, it was reviewed – twice – and it did make the shortlist.

Fifty-one reviews were posted this month, 7 more than last March’s bumper number, and 31 more than last month. They covered 32 authors, for 39 different books. Our highlights are:

Five classics were reviewed in March. It’s not surprising, I suppose, that a bumper number of classics were read in a bumper month! They are Melina Marchetti’s young adult classic, Looking for Alibrandi; Olga Masters’ Amy’s children; Dorothy Porter’s The monkey’s mask; and two by Elizabeth Harrower, The Catherine Wheel and In certain circles. These are not “old” classics by any stretch: the oldest, The Catherine wheel, was published in 1960, and the rest after 1980, but they confirm that older books are being read.

I’ve written about Looking for Alibrandi before, but Olga Masters is a new name for the challenge and I’m thrilled to see her here, at last. Born in 1919, she was a journalist whose first book wasn’t published until 1982. Between then and her untimely death in 1986, she had four more books published including three novels, but she was also known for her short stories. Her last novel Amy’s children was reviewed by Calzean. She liked its depiction of 1930s to 1950s Sydney and how Masters managed to engage her sympathy for Amy:

So she is selfish and a manipulative – yet I felt very emphatic towards her. Interesting how the author is able to exact this feeling.

Much to my surprise I really enjoyed the contemporary world of poets and poetry: cut throat and full of deception and lies. I feared this novel would be rather pretentious but the author paints a rather cynical portrait of the world (exactly who gets published? no surprise!) which I enjoyed and appreciated.

And then there’s Elizabeth Harrower, the Australian novelist who wrote five novels between 1957 and 1971, but ended up withdrawing the fifth, In certain circles, before it could be published. Eventually published by Text in 2014, it may not technically be a classic, but we are so categorising it, given its writing date and to keep it with the rest of her novels. I reviewed In certain circles, and while I recognised possible reasons why Harrower may have withdrawn it, I was impressed. “Harrower,” I wrote, “nails feelings, attitudes and motives with a pithiness that takes your breath away.” The novel chronicles the lives of two sets of siblings, plus a fifth person, from their late teens/early twenties to their forties, and explores the wasted talents and lives that can result when people make poor decisions, particularly regarding their relationship choices. Calzean reviewed Harrower’s third novel The Catherine wheel, and starts, simply, with “wonderfully written”. Truly, if you haven’t read Harrower, you must! In this book, the female protagonist falls for a man who’s “a cad, a user of women, a drunk and a manipulator”. The exercise of power, particularly of men over women, is a common theme in Harrower’s novels.

The six-book shortlist that was announced early in March is:

Since Harrower has had a run in this post already, and Charlotte Wood’s book did in my last post, I’ll focus on the other four here.

Tegan Bennett Daylight’s coming-of-age focused Six bedrooms was reviewed three times this month. Brona (Brona’s Books) liked it, suggesting that “The sign of a good book, dare I say, a profound book, is one that instils in you a desire to be a better person”. It’s helping her, she says, remember the angst of adolescence as she deals with the adolescents in her own life! Angela (Welcome to my Library) also liked it, writing that the stories are

deceptively simple but written with razor sharp perception. Nothing is dressed up, the raw cynicism and naivety of adolescence is brutal …

very, very good. If all short story collections were this satisfying, I might very well be a convert to the world of short stories.

I love it when people are won over to short stories! Welcome Kate. Anyhow, Kate captures the sense of this book perfectly when she writes that:

These stories are not aiming to deliver sock-em-in-the-guts plot twists. Rather, they’re ruminations on the angst, joys and horrors of growing up.

Peggy Frew’s Hope Farm was reviewed four times, but I’ll just mention two, given I’ve already shared Kate and Angela’s reviews of Six bedrooms. Bree (1 girl 2 many books) enjoyed the novel, liking the 1980s rural setting and the subsistence ideal, the characters and the writing. “The novel,” she writes, “built very well towards the climax, constructing a simmering atmosphere on the farm that was bound to boil over.” Kim Forrester (Reading Matters) also enjoyed the novel, saying the characters, detail and pacing were great. However, she had some reservations, which she thinks has to do with the end which left her feeling “so what”.

Mireille Juchau’s The world without us was reviewed three times. My, our reviewers have really been getting behind the Stella it seems. Again, given Angela and Kim have been mentioned in this section, let’s look at Jennifer Cameron-Smith’s response for this one. She found it not an easy novel to read. It is, like Hope Farm, set in a rural community. It’s about present and past, about modern threats like deforestation and mining, and it’s about bees. Although the novel demanded concentration, Jennifer liked it, and defined its meaning as follows:

The central theme for me was of loss (life, lifestyle and nature) but there is also hope that the future could be different. If people want it to be, and make some changes. It isn’t only the bees whose communities can fail.

And lastly, we have Fiona Wright’s Small acts of disappearance: Essays on hunger, which was reviewed by Alex (Luvvie’s Musings) and me. We both liked it a lot. Wright shares her own experience with great honesty while framing it with knowledge. Alex commences with her own food challenges, and concludes that it’s a book that’s relevant for many to read, and she thanks

the author for sharing her experience with us, for finding the words for that most difficult of undertakings – self-knowledge – and shining a light for the rest of us who need to unravel our complicated relationship with food; that most basic of needs.

Now, I wonder who will win … all so worthy it would seem, but there can (usually) only be one winner.