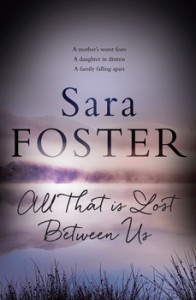 All That is Lost Between Us by Sara Foster

“Seventeen-year-old Georgia has a secret – one that is isolating her from everyone she loves. She is desperate to tell her best friend, but Sophia is ignoring her, and she doesn’t know why. And before she can find out, Sophia is left fighting for her life after a hit and run, with Georgia a traumatised witness.
As a school psychologist, Georgia’s mother Anya should be used to dealing with scared adolescents. However, it’s very different when the girl who needs help is your own child. Meanwhile, Georgia’s father is wracked with a guilt he can’t share; and when Zac, Georgia’s younger brother, stumbles on an unlikely truth, the family relationships really begin to unravel.
Georgia’s secret is about to go viral. And yet, it will be the stranger heading for the family home who will leave her running through the countryside into terrible danger. Can the Turner family rise above the lies they have told to betray or protect one another, in order to fight for what matters most of all?”

“Foster has kept a stern control of her moments of tension, leaving the story beautifully paced and impossible to put down.” Emily Paull Aka The Incredible Rambling Elimy
“Foster has captured relationships with such expertise and those interminable years between child and adult.” Veronica Joy
“Set amongst gorgeous descriptions of the beautiful but rugged peaks and lakes, tales of mountain rescues and descriptions of the joys of fell running, this is a rich and original family drama and thriller. ” Carolyn

“English dog trainer Beth Poole is having trouble getting her life back together after beating a life-threatening illness and divorcing her husband. When her Aussie-soap-obsessed grandma sends her to Australia to recover, it seems a great opportunity for some rest and relaxation while she figures out what’s next.
But when Beth arrives in Australia things get off to a rocky start. To begin with, she’s on the wrong coast and there are deadly creatures everywhere. And if that weren’t enough, her neighbours are driving her crazy. She’s staying in the beautiful Margaret River wine region, right next door to a family-owned vineyard. It should be perfect, but the boisterous Hardy clan just don’t seem able to leave her alone. The usually reserved Beth is soon reluctantly embroiled in their family disputes and romantic entanglements. And eldest son Clayton Hardy is proving surprisingly persistent.The more Beth gets to know Clayton and the Hardys, the more she sees what she wants for her future. But as the end of summer approaches, her past comes back to haunt her and will test her newfound relationships to the limit.”

“Summer Harvest is laced with self-deprecating Aussie humour, peopled with appealing and entertaining characters (Violet was my favourite), and set in a beautiful part of Western Australia.” Monique @ Write Note Reviews
“Summer Harvest is a perfect read for…well, summer. It has that filled-with-light, lazy holiday feel to it, yet it covers some darker subject matter with skill and tenderness.” Sam Still Reading
“…ultimately it is a story of hope, self-discovery, self-acceptance and moving on.” Marcia-Book Muster Down Under

The Things We Keep by Sally Hepworth

“Rosalind House might not be the first place you’d expect to find new love and renewal, but within the walls of this assisted living facility two women have their lives changed forever. Anna Forster, in the early stages of Alzheimer’s disease at only thirty-eight years of age, knows that her twin, Jack, has chosen Rosalind House because another young resident, Luke, lives there. As if, Anna muses, a little companionship will soften the unfairness of her fate. Eve Bennett also comes to Rosalind house reluctantly. Once a pampered, wealthy wife, she is now cooking and cleaning to make ends meet. Both women are facing futures they didn’t expect. With only unreliable memories to guide them, they have no choice but to lean on and trust something more powerful. Something closer to the heart.”

“This book is written with beauty and sensitivity, it’s a compelling story and a heartbreaking rendition of love.” Bree @ 1girl2manybooks

“Hepworth writes hard hitting and realistic stories that could happen to any of us, she addresses issues from everyday life in a way that we wouldn’t necessarily have contemplated.” Michelle @ Beauty and Lace

Running Against the Tide by Amanda Ortlepp

“The past will always find you. Erin Travers is running away from her life and taking her two sons with her to a small town on the ruggedly beautiful Eyre Peninsula. The close-knit township is full of happy childhood memories for Erin, but she’s bringing a whole lot of baggage with her. When the peaceful community is disrupted by theft and arson, rumours fly about who is responsible. In a small town where lives are tangled too closely together, old grudges flare, fingers are pointed and secrets are unmasked.”

“Running Against the Tide is the perfect name for this story as it is not only a great analogy for the Oyster Farms but works so well for Erin Travers and her life challenges.” ReadRoundOz
“This is one of those wonderfully written, multi-layered novels peopled with interesting and at times complicated characters.” Jennifer
“Thrilling and engrossing, Amanda has done an impressive job in writing this novel. Weaving the strands together in such a manner that we feel the same sense of urgency, disbelief and hurt as her characters, her second novel is well-paced and gripping with a profound almost claustrophobic sense of place, a deep sense of character and enough red herrings to keep you guessing.” Marcia-Book Muster Down Under

All These Perfect Strangers by Aoife Clifford

You don’t have to believe in ghosts for the dead to haunt you. You don’t have to be a murderer to be guilty. Within six months of Pen Sheppard starting university, three of her new friends are dead. Only Pen knows the reason why. College life had seemed like a wonderland of sex, drugs and maybe even love. The perfect place to run away from your past and reinvent yourself. But Pen never can run far enough and when friendships are betrayed, her secrets are revealed. The consequences are deadly. ‘This is about three deaths. Actually more, if you go back far enough. I say deaths, but perhaps all of them were murders. It’s a grey area. Murder, like beauty, is in the eye of the beholder. So let’s just call them deaths and say I was involved. This story could be told a hundred different ways.’

“I was completely caught up in Pen Sheppard’s narrative as she shares her internal reflections and perspective of events, moving from present to past, from small home town to university campus, smoothly and without losing the flow of the story.” Sharon Jarvis
“There are a stack of surprises in this debut novel by Clifford and she expertly ekes them out in dribs and drabs, adding to the complexity of the plot.” Debbish
“All These Perfect Strangers is anything but formulaic [crime fiction]” Ruth Wykes

The River House by Janita Cunnington

“It is the late 1940s, and the Broody River runs through a maze of sandbanks into the Coral Sea. On its southern bank lies the holiday town of Baroodibah. But its northern shore is wild – unsettled except for the River House, an old weatherboard box on stumps where the Carlyle family take their holidays. For four-year-old Laurie Carlyle the house and its untold stories fire the imagination. It is a place of boating trips and nature collections, of the wind howling, the sheoaks sighing and the pelicans soaring into the blue sky. But when a squabble between Laurie and her older brother Tony takes an unexpected turn, she detects the first hints of family discord.  As the years pass, the River House holidays seem to shine a light on the undercurrents in the family: the secret from her mother’s past, the bitterness between Tony and their father Doug, and her sister Miranda’s increasingly erratic and dangerous behaviour . . .”

“Janita Cunnington’s expressive prose is the standout feature of The River House. Small town Queensland comes to life in vivid colour through the pages of the book – the sticky heat of summer, the sounds of the river and beach in the background, the call of the wildlife and the whistling of the wind through the weatherboard cottage.” Simone

“… it’s not just my personal nostalgia that makes this a good book. Janita Cunnington has crafted a richly evocative novel about growing up, about life spent on the river and near the ocean, about the passing of time and how just as the river’s path changes, meanders, sandbars appear and disappear, and deep channels are cut by the flow of the ocean and currents, so too life changes, there are bumps in the road, and at times all we take for granted is swept away.” Sonja Porter

That Devil’s Madness by Dominique Wilson

“In 1896 Louis and his father, seduced by the allure of North Africa, travel to Algeria in search of a better life. There, Louis befriends Imez, a Berber boy, and the two become firm friends. They grow and prosper, and become like brothers. Years later, Nicolette, an Australian photojournalist, is drawn to cover the illness and eventual death of Algerian President Boumedienne. She sees it as an opportunity to follow in her grandfather’s footsteps, make her mark, and restore the bonds of the past. But the rules have changed – will the bonds that once existed be sufficient for her to survive?”

“This is a story that is both intimate and epic. It is a story about emotional scar tissue – its creation and the devastating effects it can have on generations that follow. Through the plight of individuals Wilson highlights the unfathomable harm and deprivation we humans inflict upon one another.” Jo @ Booklover Book Reviews