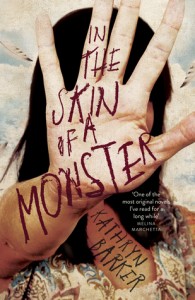 We had a nice spread of reviews this month of seventeen different speculative fiction books. For a change, I shall note them in alphabetic order by author.

The YA Aurealis Award-winning In the Skin of a Monster by Kathryn Barker was reviewed by Jennifer Cameron-smith, who enjoyed it. Ever since I heard the premise for this one — about a girl whose twin sister committed a horrible crime — I’ve been keen to read it.

Bad Power by Deborah Biancotti is a collection of four short stories about morally questionable people with superpowers. Stephanie Gunn reviewed it as part of her quest to read and review all of the Twelve Planets collections. She writes:

Overall, this is another stunning addition to the Twelve Planets, and one of my favourites (unsurprising, since I am a huge fan of all of Biancotti’s work).  The basic trope of superpowered humans has been explored many times, but few authors have the ability to really make the stories about the humans and not the powers (or the battles they fight). Biancotti does all of this, and more, making this a collection I would recommend whole-heartedly to anyone, and especially those burned out on superheroes.

Special by Georgia Blain was reviewed by Nalini at Dark Matter Zine, who didn’t particularly enjoy it but thinks some YA readers would enjoy it “especially those who experienced a crash when transitioning from privileged child to insignificant adult.” Brenda reviewed The Bloodstone Key by Jenni Boyd, a fantasy novel. She enjoyed it, writing

The Bloodstone Key by Aussie author Jennie Boyd is an excellent tale of mystery, evil and the legends of medieval times, entwined with hope for the future at the hands of one special young woman. It’s an intriguing plot which moved along at a fast pace; and I thoroughly enjoyed it. I have no hesitation in recommending The Bloodstone Key.

Debut novel Waer by Meg Caddy was reviewed by Emily Paull Aka The Incredible Rambling Elimy, who wrote:

So too is the characterisation in Waer a delight.  The book is told from two points of view; Lowell’s, and Lycaea’s (and didn’t I get a thrill from connecting Lycaea with Lycanthrope!)  Each voice is surprising and well-rounded.  Lowell is a sensitive and spiritual boy, family-minded and raised in a calm, rural environment where he has always felt safe.  Contrasted with this, Lycaea is from a community of brigands, and is a skilled fighter.  When the two meet, she has just escaped torture at the hands of the man who will become the book’s antagonist, Daeman Leldh.

BFF (big fat fantasy) book The Lyre Thief by Jennifer Fallon is the first in a new series set in the same world as the Demon Child Trilogy and the Harshini Chronicles. The author was interviewed by Dark Matter Zine. Who also interviewed Francesca Haig, author of The Fire Sermon and Map of Bones. Coffee2words/Lynxie gave five stars to The Orchid Nursery by Louise Katz, which she found to be a “beautifully conflicting” read. She writes:

The Orchid Nursery contains within its pretty covers, a vicious and unflinching dystopian Australia. One where women have been bred to follow scriptures and beliefs that they should serve men, they should long to be ‘Perfected’. … But, while the story is a bitter flavored pill to swallow, the writing, oh, my. The writing is superb.

The Foretelling of Georgie Spider is the third book in the Tribe trilogy by Ambelin Kwaymullina. Shannon (giraffe Days) found it to be a satisfying conclusion. She also says:

As political and philosophical as the story truly is, it is also the compelling story of human determinism, love and courage, trust and an appreciation for life in all its forms. Having finished the trilogy, I feel both bereft and impatient to re-read it (Which, sadly, will have to wait). If I could endlessly recommend any book or series to you, it would be this one. It has all the things I love in fiction, and the only negative is that Kwaymullina took it down from an original four-book series to a trilogy. But it was a good call; no drawn-out, padded and over-bloated story here! I’m eager for what she writes next, though, that’s for sure! Thorn by Charlotte MacConaghy is the second book in a fantasy trilogy. Jess @ The Never Ending Bookshelf read it with some trepidation (because she had loved the first book so much) but ultimately had this to say about it:

Once again Charlotte McConaghy has delivered a unique and innovative fantasy novel that pushes both the characters and readers beyond our wildest expectations. Part epic adventure, part mystery and part romance, there is something here for every reader, making Thorne one hell of a fantastical page-turner that is sure to keep you up late at night trying to guess what happens next. It’s a high impact, adrenaline fuelled, scream at the page, why did you do that, fall in love, kind of intense read that will leave you with the worlds biggest book hangover imaginable.

A novella rather than a novel, I reviewed “Coral Bones” by Foz Meadows. It’s a sort-of sequel to Shakespeare’s The Tempest and is available either standalone or as the best novella (as far as I’m concerned) in the Monstrous Little Voices anthology.

Finally, it seems that Mark Webb was on a bit of a Tansy Rayner Roberts kick this past month, reviewing both (the second half of) Musketeer Space and Roberts’s new fiction podcast, Sheep Might Fly. Click through to see what he thought of each of them.

Tsana Dolichva is a Ditmar Award-nominated book blogger who has been reading and enjoying Australian speculative fiction since she first started reading “grown up” books. She blogs her book reviews over at the creatively titled Tsana’s Reads. Along with Holly Kench, she is editing Defying Doomsday, an anthology showing that people with disability and chronic illness also have stories to tell, even when the world is ending (out in a few months). In her spare time she is an astrophysicist.