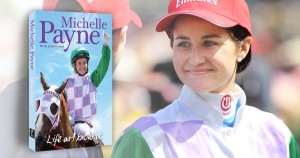 April turned out to be a month of medical memoirs.

Midwives, RPA surgeons, eating disorders, survivors of sexual abuse and drug-related neglect all featured in our reviews this past month.

They were all fascinating, thoughtful reviews, and I encourage you to click on the links above, but they’re not necessarily for the faint-hearted!

It was good to see a review of Life As I Know It by Michelle Payne – our first female jockey Melbourne Cup winner. Jennifer @goodreads tells us that

In this book, written with John Harms, Michelle writes of her life as the youngest of a large family, of the challenges of be
ing a jockey, of the opportunities she had and the difficulties she faced. It’s an uplifting story: the story of a resilient young woman, part of a close-knit family, determined to succeed.

And who, amongst us, who saw the Melbourne Cup race in 2015 can forget the elation of Michelle and her brother, Stevie, when Prince of Penzance won? Louise @Strong Belief in Wicker read a bio that I’m very keen to get into myself, Joan of Arc by Lili Wilkinson. Louise absorbed this story as an audio book –

The structure of the audiobook was a bit confusing at times, as there are historical notes and asides liberally peppered throughout the narrative- which is of course obvious in the book format but not so much in the audio. Covering interesting topics such as Women in Medieval France, Saints (especially Saint Michael, Catherine and Margaret) who spoke to Joan, these notes give an invaluable historical background to Joan’s story. Lili Wilkinson also uses many primary first hand accounts of Joan’s life, actions and her trial which while fascinating, did not always slip easily into the audio either… Lili Wilkinson did a great job of telling Joan’s story. Joan of Arc is part of The Drum series of fiction and non-fiction books produced by Black Dog Books to bring history alive for teen readers. Lili’s mum, Carole Wilkinson has also written several books for this series, as have several other Australian Women Writers. Topics covered include Alexander the Great, Ned Kelly, Mary Bryant, the Eureka Stockade, the history of gays and lesbians in Australia, the Anzacs, climate change and the Olympic Games just to name a few.

The classics lovers amongst us may have read Fergus Hume’s The Mystery of a Hansom Cab, in which case, they will be delighted to see this new book by Lucy Sussex. Before there was Arthur Conan Doyle’s Sherlock Holmes, there was Fergus Hume’s The Mystery of a Hansom Cab—the biggest- and fastest-selling detective novel of the 1800s, and Australia’s first literary blockbuster.

Fergus Hume was an aspiring playwright when he moved from Dunedin to Melbourne in 1885. He wrote The Mystery of a Hansom Cab with the humble hope of bringing his name to the attention of theatre managers. The book sold out its first run almost instantly and it became a runaway word-of-mouth phenomenon—but its author sold the copyright for a mere fifty pounds, missing out on a potential fortune.

Blockbuster! is the engrossing story of a book that would help define the genre of crime fiction, and a portrait of a great city in full bloom. Rigorously researched and full of arresting detail, this captivating book is a must-read for all fans of true crime, history and crime fiction alike (publisher quote).

Karen @Newtown Review of Books gives us a tantalising look at how Hume and his publisher carefully orchestrated the marketing, packaging and selling of this book.

Corruption and Skullduggery by Alison Alexander is another one of Jennifer’s well-spotted Tasmanian histories. This time we learn about convict Maria Riseley and Lieutenant Edward Lord and their time in early Hobart Town.

‘It’s 1805, and Maria Riseley – single, poor and pregnant —finds herself in the gloomy Female Factory, Parramatta.’

Maria Riseley was fortunate. She caught the eye of Edward Lord, a lieutenant in the marines, who just happened to be looking for a woman to accompany him to Hobart Town. Thus, incredibly, begins the story of the officer and the convict. Edward Lord and Maria Riseley (they married in 1808) made a fortune in early Hobart. Their business acumen and networking skills served them well, until the 1820s. Then, according to Dr Alexander’s fascinating book, they threw it all away: by extravagance and financial incompetence (Edward) and sexual infidelity (Maria). May is time for the Sydney Writers’ Festival and I’m a little excited! I’ve booked myself into several talks and events already and will probably wing a few as the week progresses.

Are you going too? Perhaps we should wear a purple flower in our lapels so we can find each other.