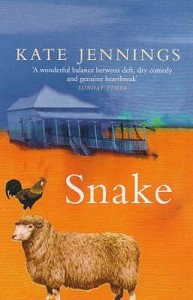 In recent years, June has been the month we’ve heard the winner of the winner of the Miles Franklin Award. However, this year the announcement has been scheduled for August so we’ll all just have to wait. However, we did have, this month, the announcement of the shortlists for the Kibble and Dobbie Literary Awards for life writing. All books have been reviewed for our challenge, which is a great achievement. The shortlists are:

Thirty-three reviews were posted this month, which is a perfectly respectable number! Thanks all. Highlights are:

Just one classic was reviewed this month, Kate Jennings’ 1986 novella, Snake. It was reviewed by Kim Forester (Reading Matters). It’s autobiographical fiction, and Kim loved it, as I did when I read it a couple of years ago. She writes:

In its examination of lives sullied by disappointment, contempt and regret, Snake is a commanding novel: one that will leave an impact. And despite its flat, matter-of-fact prose style, the narrative reads like a series of hypnotic poems brimful of acute observations and eloquent language.

Genre books can also be “literary”, as I’m sure you all know! This means that genre books can and do appear in my list as well as in the lists of AWW Team members responsible for the various genre groups (and so can also turn up in more than one round-up!). Occasionally I’ve featured one of our genre here in my round-ups, but I’m not sure when I last featured Crime. However, several crime books were flagged as literary this month so now seemed a good time to shine a light on them!

Of the five crime-tagged reviews this month, two were for Olga Lorenzo’s novel, The light on the water. It tells the story of a woman, a mother, in jail for killing (though did she?) her daughter who disappeared on a hike. Bernadette (Reactions to Reading) says that while there is some resolution to the “crime” (or is it?), that’s not what the book is really about:

Aa a result, Bernadette says, it’s a more character-driven novel, rather than a fast-paced plot-driven one. Anna (at GoodReads) felt similarly. She also found the book:

well-written, with evocative language that never becomes intrusive. I have seen some reviews that criticise the ending of the book, but I found it to be plausible and satisfying.

Linda Funnell reviewed Emily Maguire’s An isolated incident for the Newtown Review of Books. It’s about the murder of a young aged-care worker. Like Lorenzon’s book above it seems, the crime is not the prime interest of this book. Funnell writes:

This is far more than a page-turning crime drama, though it is also that. Maguire’s focus is on those left behind, the often unacknowledged victims of violent crimes, and roiling beneath it all is a bigger picture of accepted, commonplace and insidious attitudes to women. We do find out whodunnit in the end, but in this context it’s almost a footnote.

One of this month’s non-fiction books, Melanie Joosten’s A long time coming: Essays on old age, was reviewed by Shelley McInnes for the Newtown Review of Books. The essays draw from Joosten’s interviews with nursing home residents from Bathurst Island to Melbourne’s CBD, but she “interweaves [these voices] with pertinent facts, as well as snippets of information about her own life”. She also talks about:

how the media frames feminist issues around the concerns of younger women, and how even to younger feminists the interests of older women appear to be invisible. Germaine Greer, Susan Sontag, Simone de Beauvoir, Betty Friedan, Gloria Steinem and others have recorded their experiences of ageing, Joosten notes, but where, she asks, are the women prepared to take up their cause?

Good question, though it sounds like Joosten is doing her best.

Amongst the memoirs reviewed in June was poet Colleen Z Burke’s The waves turn: A memoir. Jeanette Delamoir writing forThe Newtown Review of Books sees it as more than a memoir because of the breadth of Burke’s story:

The era includes the restrictions of the Menzies years and the social revolutions of the 1960s and 70s – cultural changes to which she was close, through her participation in the fringes of Sydney’s Push, involvement in Australia’s folk music scene (including her marriage to prominent musician Declan Affley), and activism on multiple fronts. Burke’s life becomes a valuable lens though which to explore the intertwined histories of folk music, Irish heritage, and political activism, traversing themes such as class, religion, gender relations, and personal commitment.

It is clearly an action-packed memoir that tries to cover a lot. Delamoir concludes by describing it as “a self-portrait that holds the reader at a distance while feeling paradoxically intimate”.

A fascinating and diverse collection of reviews this month, and I’ve only been able to mention a few of them. No wonder I enjoy being part of this challenge.