Crime Fiction and True Crime: Round Up Four 2016 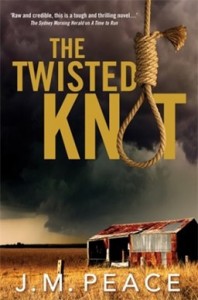 Alas review numbers are a little down this round-up, with only 39 posts discussing 29 distinct works. However there are still plenty of gems being read and reviewed.

J.M. Peace has followed up last year’s well-received debut with THE TWISTED KNOT which attracted five reviews from challenge participants. The book is set in rural Queensland and sees constable Sammi Williams, the victim-turned-heroine from Peace’s first novel, investigating the death of a man thought to have been hurting little girls. At Samstillreading the book was a hit

This is a great police procedural as Sammi investigates all angles of the crime, finding leads and coming up against brick walls. I liked how things happened in the police station – I felt as though I was getting a real insight into the day to day workings of it all. Tension is created by short, sharp chapters and sentences. There’s no filler here, the plot and sentiment of the novel is taut and will have you saying ‘one more chapter’ many times over!

At Carpe Librum Tracey echoes some of the same sentiments

The dialogue is uniquely Australian and I loved the small town setting in Queensland, Australia…I really enjoyed the character development, the rhythms of work-life at the police station (my favourite part) and unraveling the ‘whodunnit’ aspects of the novel.

Rural Australia, this time a fictional place in Victoria, is also the scene of Jane Harper’s debut novel THE DRY which scored three reviews. The story opens with what appears to be a murder suicide – an all-too realistic occurrence in drought-ridden country like that depicted here – but the town and its people hold secrets which need unravelling. I thought the book quite brilliant in many ways including its depiction of its setting but you don’t have to take my city girl’s word on the matter At Newton Review of Books Karen, who isn’t a city girl, writes

In a country with a lot of mythology built around rural connections, it has always come as a surprise how much of Australia’s rural-based crime fiction is slightly off the mark. It often feels as if authors are comfortable appropriating the sense of distance and isolation into something sinister and ‘other’, but less comfortable acknowledging the positives or the subtleties. For readers who know the bush, there can be a sense that much of what is written is lacking in nuance or awareness of the less obvious aspects of life outside the city limits…Those readers can rest assured that Jane Harper, a UK/Australian city-based journalist turned author is not afraid to write something realistic in The Dry. She delivers something that seems like a scrupulously fair depiction of life in a small rural location struggling with the despair of drought when the seemingly unthinkable happens…

Karen goes on to say

While The Dry is a strong character study, it also creates a sense of place and environment that is palpable. The devastating effects of drought are woven into the story as part of the action, character motivation and reaction, making the starkness of the situations being faced feel brutally confrontational and carrying a clever and twisting plot forward, driving the narrative. The drought and the heat are part of what makes people crack and say things they may not normally, opening up the tensions, creating doubt about themselves and each other.

A lot of crime novels rely on abnormalities to keep readers’ attention. Serial killers with macabre fantasies. Impossibly convoluted crimes. Implausibly brilliant and/or quirky detectives. THE DRY has none of that. Even that horrendous weather is par for the course in the driest continent on the planet. Yet even without gimmicks and quirks, the story is completely gripping. There is such a palpable sense of the hidden here.

If you happen to be a fan of audio books I can recommend the audio version of this, narrated by local voice artist Steve Shanahan. It is an absolute treat to hear a thoroughly Australian story in a wonderfully Australian voice.

I picked up a copy of Anna Westbook’s DARK FIRES SHALL BURN while celebrating National Bookshop Day last weekend (I considered it my civic duty to support my local independent bookshop) and Karen at Newton Review of Books has made me very glad this is one of four books that made it into my shopping bag, saying of the book

The novel takes place in 1946, in a society adjusting to the end of the war. There’s an influx of returning soldiers, many carrying the psychological scars of their experiences with them. There are bootleggers, marauding gangs and brothels run by women, but guarded by dangerous men. Despite this seemingly very male environment, Dark Fires Shall Burn is a story mostly about women. Not written exclusively for women readers, it’s a story of the way that women’s and girls’ lives played out against that male backdrop.

What will stay with readers is the under-acknowledged damage done to women in wartime Australia. It is, of course, very different from the damage done to the soldiers who fought, but it’s there. It’s in the mothers raising children alone because fathers couldn’t, or sometimes wouldn’t, return to support them. It’s there in the young girls who had to survive when the economy suddenly deemed them ‘not necessary’ to a workforce that had recently welcomed them. It’s there in the young girls who grew up in a time of turmoil and change, watching their mothers’ pain, trying to divine their own futures as they observe the struggles of so many young women around them.

Not all discussions of Julie Proudfoot’s 2014 novella THE NEIGHBOUR talk of it being of the crime genre but happily for us Sue at Whispering Gums has labelled it as one of “ours” so we can highlight it here. Sue was attracted both by the book’s gorgeous look and its fabulous content

It’s an Ian McEwan style page-turner. By this I mean it starts with a dramatic event which sets in train actions and reactions as the characters struggle to come to grips with the event, with its impact on themselves and their relationships, and with the way it exposes secrets and past traumas….The neighbour is a novel about psychological disintegration brought about by grief and guilt, and about the tension that ensues when one wants to forget, another wants to remember, while yet another wishes to atone.