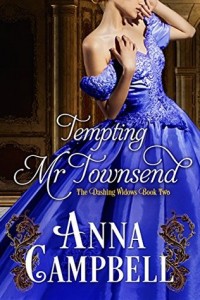 Well, I asked for it. A selection of books to get my teeth into. Numbers are up a little from last month with 13 reviews returned, 13 books returned and 12 authors returned and the author with two books reviewed is…Colleen McCullough! Brenda is our top reviewer this month with three reviews and I’ll be highlighting two.

Let’s kick this month off with a Regency romance (I mean why not) – Tempting Mr Townsend by Anna Campbell. “When rough diamond Anthony Townsend, who also happens to be one of the richest men in England, bursts into Lady Fenella’s house and demands she hand over his runaway nephew, this dashing widow embarks on a breathtaking adventure that might just end in exciting new love.” Elizabeth Fitzgerald at Earl Grey Editing writes, “Fenella was a great character. Society might view her as a fragile beauty, but she has a backbone and a good head on her shoulders. She might be high society, but that doesn’t make her judgemental and she’s good at giving others the benefit of a doubt.”

Jump thirty odd years ahead to The Cedar Cutter by Tea Cooper. “Roisin Ogilvie and her six year old son Ruan were tired, hungry and a little bruised by their journey on the old cart when they arrived in Wollombi in 1855.” Now that’s an interesting location for a historical novel. Might have to add this to my pile. Brenda at Goodreads observes, “The blending into the story of the local natives; the rum drinking, loud mouthed cedar cutters and the strength of the women of the town – all combine to make an entertaining and thoroughly enjoyable read.”

Next up is a verse novel set in 1880 – Ruby Moonlight by Ali Cobby Eckermann.”The main character, Ruby, refugee of a massacre, shelters in the woods where she befriends an Irishman trapper.” Sue at Whispering Gums writes, “The novel is imbued with indigenous presence, from the opening where Ruby’s family live in “Harmony” in their environment, through her meeting with the other mob, the Cloud people, “on their winter trek”, to the appearance of “Kuman”, her guardian spirit who guides her to safety. It sounds a very interesting read.

Brenda’s second review in this roundup is The Ladies of Missalonghi by Colleen McCullough. “Sometimes fairy tales can come true–even for plain, shy spinsters like Missy Wright. Neither as pretty as cousin Alicia nor as domineering as mother Drusilla, she seems doomed to a quiet life of near poverty at Missalonghi, her family’s pitifully small homestead in Australia’s Blue Mountains.” Many years ago I found this book a delightful read as does Brenda at Goodreads. “Aussie author Colleen McCullough had a definite way with words, and I thoroughly enjoyed Missy’s growth, along with her mother, aunt and other spinster ladies in town.”

The next book chronologically is the one that, of course, made McCullough famous – The Thorn Birds. “Powered by the dreams and struggles of three generations, The Thorn Birds is the epic saga of a family rooted in the Australian sheep country. At the story’s heart is the love of Meggie Cleary, who can never possess the man she desperately adores, Ralph de Bricassart.” Kira at Read, Write, Run concludes, “I loved seeing the characters grow older, and not just from childhood to adulthood but into old age as well. It truly is an Australian classic, one I can see myself reading again and adding permanently to my bookshelf.”
I feel guilty to admit I still haven’t read this book and am grateful to Kira for the reminder.

And here’s another one I must read – the award-winning The Strays by Emily Bitto. “The Strays is told from the perspective of Lily as she looks back on the childhood and teen years she spent involved in the lives of her best friend Eva Trentham and the rest of the Trentham family. Eva’s father, Evan Trentham, is a passionate, slightly mad artist living with his wife Helena and their three daughters, Beatrice, Eva and Heloise in Melbourne in the 1930s.” Jemima at Oddfeather writes, “The Strays is several kinds of novel packed into one. On the surface it is a memoir and a meditation on female friendship, but alongside that is the emergence of modern Australian art in the stifling, conservative world of 1930s Australia as brought forth by Evan and Helena Trentham and their circle. Even deeper than that it is a treatise on the consequences of decadence, neglect and poor parenting.”

Also reviewed by Jemima and also set in the 1930s is Anna Funder’s All That I Am, No. 828 on my shelf and another award winning book. “When eighteen-year-old Ruth Becker visits her cousin Dora in Munich in 1923, she meets the love of her life, the dashing young journalist Hans Wesemann, and eagerly joins in the heady activities of the militant political left in Germany.” Jemima at Oddfeather has high praise for Funder’s book. “Funder’s historical research to create this novel is incredible, and most of the characters are either real historical figures or based on real people who lived through these events.In short, there is nothing about this novel that doesn’t work, and it is the perfect book to become completely absorbed in and renewed by.”

A very diverse range of books this month which hopefully include the next book you will read. Like a very effective Tardis, historical fiction can take you anywhere!