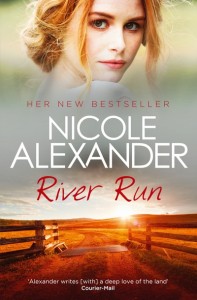 Well, have numbers jumped this month! 20 reviews. Quite a lot more than last month and a range of books that I haven’t seen reviewed before. The excellent The Anchoress by Robyn Cadwallader, Salt Creek by Lucy Treloar and Natasha Lester’s A Kiss For Mr Fitzgerald have been reviewed this month but as they have been featured only recently in other roundups, I won’t highlight here but I will make an exception for River Run by Nicole Alexander with two reviews. The other book with two reviews is Barbed Wire and Cherry Blossoms by Anita Heiss. Our top reviewer is Brenda with an amazing five reviews out of this month’s 20. Go Brenda!

For a change I thought we might work chronologically backwards and start with River Run by Nicole Alexander. “It is January 1951, and after a year away Eleanor Webber has returned home to River Run, her family’s sprawling sheep property in western New South Wales. Fleeing a failed love affair back in Sydney, she hopes for some time and space to heal.” Brenda at Goodreads is enthusiastic: “River Run by Aussie author Nicole Alexander is another riveting and tension filled historical mystery which had me glued to the pages.” Whilst Jeannette at readroundoz “loved the narrative around the shearing shed and the characters involved there.  Each of them so unique, as I imagine they would have been on properties like River Run, in those earlier days.”

Very excited to see three books set during WWII reviewed last month. In The Safest Place in London by Maggie Joel “it is January 1944 in London – freezing outside but the dinner of hot fried chips Nancy Levin was cooking her three year old daughter Emily would warm them. That all changed in an instant when the air raid siren sounded and Nancy and Emily immediately deserted their dinner and rushed to the Bethnal Green underground tube station to join hundreds of others doing the same.”  Brenda at Goodreads observes, “The two women, Nancy and Diana are both strong characters, but in different ways – and both would do anything to keep their daughters safe.”

Also set in 1944 is Barbed Wire and Cherry Blossom by Anita Heiss. “Over 1000 Japanese soldiers attempt to break out of the No. 12 Prisoner of War compound on the fringes of Cowra. In the carnage, hundreds are killed but one soldier, Hiroshi, determined to avoid either fate, manages to escape.” Jeannette at readroundoz was particularly moved. “Whilst this is fiction, the narrative seemed so authentic and the characters and the harsh environment so real there were moments I came close to tears.” Sam at Sam Still Reading was impressed with the portrayal of both the “Different aspect of Australia during World War II and the marginalisation of the Aboriginal people.”

Back a few years and we have Maggie’s Kitchen by Caroline Beecham. “When the British Ministry of Food urgently calls for the opening of restaurants to feed tired and hungry Londoners during WWII, Maggie Johnson seems close to realising a long-held dream.” Our very busy reviewer Brenda at Goodreads writes, “I thoroughly enjoyed reading about Maggie and her staff (mostly friends and her cousin Rose); the lives of Robbie as he searched for his Dad and Janek and his fierce desire to return to Poland.”

Moving along to the turn of the last century with Golden Hope by Johanna Nicholls, “Clytie Hart, bareback rider, travels with her mother and her circus family through the back roads of rural Victoria. Wildebrand’s Circus has seen better days and when they are persuaded to perform at Hufnung, a small, forgotten town in the Gold Triangle, Clytie’s life is changed forever.” Minor quip but Clytie on the cover looks very glamorous and not part of that world at all but Julie at Goodreads found “I love these Historical stories which are set in rural parts of Australia, this is my home country and the scenes instantly transport me to those places described. I can easily visualise the scenes and almost smell the bush aromas…the prevailing scent of eucalyptus and gum trees…as the characters traverse those country roads and trails.”

Next up is a novel imagining the life of an amazing woman Elizabeth Gould – The Birdman’s Wife by Melissa Ashley. “Elizabeth Coxen was born on 18 July 1804 at Ramsgate in England. In January 1829 she married John Gould, a zoologist. Over a decade, she designed and completed some 650 hand-coloured lithographs of exotic bird species.” I’m thinking Jennifer at Goodreads was probably wondering the same thing. She observes…”part of the magic of this novel is the way the story unfolds. This is a beautifully written novel: it took me into the nineteenth century, into a world I can only read about.”

And we’ll wrap up with the way back past and stuff of legends – Joan of Arc by Lili Wilkinson. “Joan of Arc left home when she was 15. At 16, she led the French army to victory. At 19 she was burned at the stake. Angel or witch? Saint or heretic? Who was Joan of Arc?” Brona at Brona’s Books found this book to be a fascinating and well researched bio for young people. She observes, “One of Wilkinson’s primary sources was the translated verbatim report on the proceedings of Joan’s 1431 trial. This is available from the International Joan of Arc Society along with other links to papers and earlier works.”

And that’s it peoples for a very busy month for reviews in the land of historical fiction. I hope this beautiful spring we are having is not taking you too far away from your books. Audio perhaps as you walk? We will see.