Crime Fiction and True Crime: Round Up Five 2016 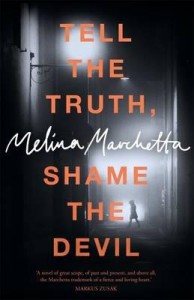 Since the last Crime round up there were 32 reviews posted of 22 different books. Numbers might be down as we slide into the end of the year but we’ve been reading some thought-provoking books over the past two months.

Melina Marchetta’s first book for an adult audience is TELL THE TRUTH, SHAME THE DEVIL and it’s scored four reviews from AWW participants (so far). The book opens with an explosion on a bus full of holidaying English teenagers in France. One of the teens is the daughter of an English policeman who immediately heads to Calais to find out what’s happened to his daughter. He is then drawn into highly tense investigation. The book is thoroughly modern in its exploration of current social issues and ideas which Ashley Kalagian Blunt picks up on in her review at Newton Review of Books

Marchetta highlights many of the injustices faced by migrants, refugees and Muslims. She weaves the intimate effects of prejudice on her characters’ lives into a larger context,

and going on to say

The novel manages to touch on several other hot topics as well – including social media’s power to both build community and incite violence, sexual identity and the challenges of modern parenting. Each of these is integral to the plot and handled skilfully – but readers looking to read crime as an escape from reality may find this book too much of a reminder of today’s headlines and politics.

Blunt sums up the book this way

This is a smart novel that works hard to challenge stereotypes and present diverse characters in an empathetic and engaging way. Marchetta’s writing is vivid and fluid, though she sometimes resorts to melodramatic lines such as ‘There could be no more dead kids’.

I thought the book a great read and am hopeful Marchetta will write more books for adults.

Jane Harper’s THE DRY was discussed in the last Crime round up but garnered another four reviews since then and I thought it worth highlighting one from Kim at Reading Matters.

Quite frankly, The Dry, is an astonishing debut. It’s an exceptional crime novel, one of the best I’ve read in years. That I failed to guess the “solution” (I’ve read so many crime books over the years I usually spot them long before the ending) is testament to her skill. Even the denouement, usually the weakest link in a crime novel because, well, the author has to wrap the story up somehow, is deftly handed and quite a surprise. Colour me impressed.

I’ve been following Kim’s blog for years and know she’s not a pushover when it comes to being impressed so this is high praise.

Over at Voices under the Sun Christine discussed Anne Buist’s 2015 novel MEDEA’S CURSE. Having struggled with this book myself last year I was intrigued to read a review from someone else who found the book difficult, at least to begin with. Though perhaps that was always going to be the case with a book about women who kill. Christine’s discussion of the book and the way it plays with notions of ‘normal’ and gender identification is genuinely thought-provoking

…reading Medea’s Curse helps me confirm the kind of bias I have as a female reader, and how much such bias has been taken for granted as a “natural” part of “women’s nature” (as compared to “human nature”) in general. In Natalie’s words: “Most women didn’t like her much. Women her age were uneasy with a woman who enjoyed sex, liked being single – and thought a man’s marital status was his problem, not hers.” (p.89) In this sense, Medea’s Curse is very much about breaking “rules” – norms, customs and common perceptions of the ways in which women should behave in society, in front of men, and specifically among women. How women see themselves as being “good” or “bad” is very much a product of long processes of identity formation, standardisation and circulation by themselves as much as by others.

And since we’re on the topic of confronting subjects for crime novels I’ll mention a book I read a few weeks ago and am still mulling over. Jane Jago’s THE WRONG HAND is the story of two young boys who kill a toddler. Actually it’s not really about their crime (there are few details and no sensationalism). It’s about the aftermath. The impact on the toddler’s parents, the police who investigated the case, a journalist who reported it. And the two perpetrators and their families. This is of course the most difficult aspect of the book and I wrote

As adults both men struggle with their pasts and it’s so very easy to believe they deserve all the inner turmoil that comes their way. Until Jago reminds us that they were so very young when they did what they did and neither of them had an ideal home environment. Ought they live in torment forever? The question of how long people should be held accountable for things they do as children permeates the book, as does the exploration of what options society has for dealing with child perpetrators of violent crimes. Jago doesn’t offer concrete solutions – I doubt that was ever her intention – but rather prompts the reader to really contemplate these complex issues with more thoughtfulness and consideration than sound bites and social media outrage allows in the modern era.

Although I don’t know that I’m any closer to having any concrete ideas myself about how such cases – and such people – should be handled I am impressed with the sensitivity and thoughtfulness Jago approached the subject and I kep bringing up issues the book raises in discussions with friends and family. Which has to be a good thing, right?