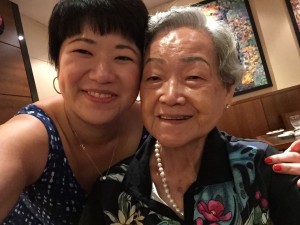 Over October, we’re holding a focus on Australian women writers of migrant heritage. Today we’re very happy to feature a post (and a poem!) by Eileen Chong. Eileen is a Sydney poet. Her books are Burning Rice (2012), Peony (2012) and Painting Red Orchids (2016), all from Pitt Street Poetry. Burning Rice was shortlisted for the Anne Elder Award, the Australian Arts in Asia Award and the Prime Minister’s Literary Award. Most recently, she was poet-in-residence at the Royal Botanic Garden Sydney and at the Bundanon Trust. She runs Potts Point Press, which produces letterpressed broadsides of Australian poems. www.eileenchong.com.au

The first language I remember hearing is Hokkien, the dialect of my mother’s family. I was born in Kandang Kerbau Hospital in Singapore in 1980. I grew up in multicultural Singapore, a post-colonial society where the dominant ethnic group is Chinese. By ‘Chinese’, I mean members of the Chinese diaspora, Singaporean-Chinese, mostly from the Southern provinces of China, who had largely migrated in the early to mid-1900s post-revolution. Concepts like ‘race’, ‘ethnicity’ and ‘identity’ were simplified for the masses by the government. At birth, you were classified into one of four ethnic groups: Chinese, Malay, Indian, or Other. This depended on your parents’ race(s), of course, and also determined your official Mother Tongue, the second language you would learn in school. English is the language of education, law and commerce in Singapore. The acrolect, or the peak variant of the language, is Standard Singapore English. The basalect, at the bottom, is Singlish, a pidgin English comprising a vocabulary of English, Chinese, Chinese dialects, Malay, Tamil, Hindi and other linguistic borrowings. Singlish is constantly in-flux; it is a creole that is very much alive. Singaporeans code-switch hundreds, if not thousands, of times throughout a day, for a multitude of reasons, the main being effective and appropriate communication.

I was (and remain) a voracious reader. My reading diet started at the age of 5, where I recall teaching myself to read from a set of early readers’ books that my mother had bought for me. Ours was not a reading household – an early memory I have is that of my father putting on his spectacles as a preamble to watching tv. Once I started to read, I read everything that I could get my hands on, which, in that time and space, were cookbooks of my mother’s. (My grandmother, who took care of my brother and myself almost everyday, is a wonderful cook, but is illiterate.) By the time I started primary school at age 7, I could tell you the differences between boiling and poaching, slow-cooking and flash-frying. I moved to Australia in my late twenties, following my then-partner who was returning to his hometown of Sydney after some years working in Singapore. I had been a high-school English teacher in Singapore, and expected to continue my career in Australia. You can imagine my dismay when I was informed that my qualifications (a Second Upper Honours Degree in Literatures in English from the second oldest university in Singapore; a British Council Gold Medal winner for Excellence in English Literature, Diploma in Education in English and Literature) were not recognised as I did not come from an English-speaking country. I would have to sit for a English proficiency test, undergo further training as a teacher, or attain more qualifications from an Australian tertiary institute.

I’m not taking an English qualifying test, I thought, it’s an insult. I already had a Dip. Ed., I didn’t need to be taught how to teach. So it was back to university for me. I enrolled in a Master of Letters, after considering doing an academic Masters. My rationale was that I only wanted to get this qualification so I could go back to teaching; and if I wasn’t any good at creative writing, I could always go back and do an academic PhD, which had been in my life plan, at any rate. So I embarked on my creative writing studies.

I worked on fiction with Sue Woolfe, screenwriting with Ian David, and poetry with Judith Beveridge. Judith says that to this day, she has never seen it happen the way it happened with me. It was like I just ‘got it’ overnight – after a few struggles and false starts, I started to write poetry. I knew I had found my form, and I couldn’t stop writing. At one of my first public readings, the NSW Parliamentary Poetry Soiree, organised by the Red Room Company, I was asked by a lady where I had ‘learnt to speak English so well’. At another event, I was told that I was very fortunate to be able to access a culture that was ‘so currently in vogue’. A critic once asked me when I was going to ‘stop writing Asian’, because it would pigeonhole my work.

I don’t think of my work as only Asian, although I access memories and culture that stem from China, Singapore and Asia. I think, dream and write in English, the language of my birth country’s erstwhile colonial oppressors. I can speak in a Standard Singapore English accent, in Singlish, or in a Sydney-side Australian accent. I can speak conversational Mandarin, limited Hokkien, and a smattering of market Malay. I cannot read Chinese, in fact, I probably read more French than Chinese.

I wake up in the morning, and look in the mirror, and know that I am who I am – a third-generation Singaporean-Chinese woman, a first-generation Australian-Chinese migrant, the first (and only) poet in my family. My literary influences range from Shakespeare, Keats, T.S. Eliot, Seamus Heaney, Pablo Neruda, Federico Garcia Lorca, Sylvia Plath, Elizabeth Bishop, Adrienne Rich, Linda Gregg, and Jane Hirschfield to Li Bai, Du Fu, Bai Juyi and Li Qingzhao. I read almost anything and everything – one thing leads me to another, all the time.

I leave you with a poem of mine, ‘Seven in the Bamboo’, from my third collection, Painting Red Orchids (2016, Pitt Street Poetry, Sydney). In it, I reference the mythical Seven Sages of the Bamboo Grove, who were a group of intellectuals who withdrew from court life, as well as the political artwork of Raquel Ormella. Asian, Australian, or somewhere in between: my true work as a poet is to think, dream, process, and write.

Seven in the Bamboo

In the morning I wake and put on my clothes

and shoes and a cap. I walk to the water’s edge

past dogs, people, bicycles and boats.

The sun rises on the horizon and I sit and face

the water and think and watch the clouds and the trees.

I don’t read a newspaper or buy a coffee at the café.

I go home and take a hot shower and sit with my cats.

I read a book, maybe two, write some poems perhaps.

I listen to music: the radio, sometimes, or something old

from my collection. I stretch and lie down in the grass.

I eat something: fruit, cheese, a bowl of soup. On good days

there is chocolate. There is always a cup of tea. I don’t think

about pain, or loss, or the past, although they are there.

I don’t think about refugees or dead babies or chemical

warfare or Iraq or Israel. I worry I live under a rock

even as my mind winds up the wooded paths and streams

of third-century China. I imagine I am packing a frame-

and-cloth bag full of books and two changes of clothes

for a long journey into the mountains. Seven of us meet

in a bamboo grove. Two of us make love in the moonlight

after we are all drunk from pots of rice wine. Someone watches

us, but we don’t care. We forget about society, about politics,

about government. We sow, we grow, we reap. We dream, we read,

we write, we paint. The notes of the zither shiver in the night air.