M is for Moriarty, McLeod and Maguire 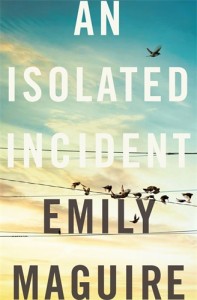 It’s received wisdom that the best surnames to have if you’re an author are ones starting with a letter in the middle of the alphabet. That way you’re more likely to be shelved in bookshops at eye level. Could that help to explain the popularity of “M” authors such as Liane Moriarty and Kate Morton? I doubt it. Judging by the response to these authors’ work from our AWW participants, it’s far more likely that they simply produce darn good reads.

At the beginning of the year, Liane Moriarty was voted Number 3 on Booktopia’s “Australia’s Favourite Author” list, so it was a little odd when, in July, the Sydney Morning Herald featured her in an article subtitled, “why is Liane Moriarty the most successful Australian author you’ve never heard of?” Clearly we readers have heard of her, and enjoy her stories.

Yet it isn’t Moriarty’s latest release, Truly Madly Guilty, that is topping the “M”-author reviews this year: so far it has attracted only three. The most reviewed general fiction “M-author” book is The Other Side of the Season by Jenn J McLeod with a whopping nine reviews. Next in popularity with three reviews each are Emily Maguire’s new novel, An Isolated Incident and Lake House, Kate Morton’s 2015 release. I’ve read and enjoyed both of these authors’ works in the past and will keep looking out for these latest two in the library.

As both Morton’s and MacLeod’s books have already received a lot of attention, and Maguire’s book was featured on the AWW blog earlier this year, I thought I’d draw focus on to books that, so far this year, have attracted only one review each. The majority of these are 2015 and 2016 releases:

Dianne Maguire’s, What Matter’s Most (2015), is a book about a paediatrician and patient which has, according to Jools, a misleading cover: “I was surprised at just how good this book was as I was not expecting such a complex and in depth story with an equally complex and in depth cast of characters.”

Janine Rizzetti found herself at a loss how to review Fiona McFarlane’s collection of short stories, The High Places (2016), commenting, “there wasn’t a single story where I turned the page only to wonder ‘what was THAT all about?’ when the story had unexpectedly ended.”

Anna writes she was misled by the cover blurb into expecting Polly McGee’s, Dogs of India (2015), to be “a light-hearted story centred around a single central character. In fact there are many central characters – to the extent that it becomes distracting at times – and the story deals with some serious themes and is actually often quite unpleasant.” I looked up the blurb on The Author People’s website: “Dogs, monkeys, corruption and sexual politics: Dogs of India draws on the complex, chaotic and colourful tradition of Indian storytelling in a spicy literary blend of Animal Farm vs. Holy Cow via Bollywood.” I’m wondering if it might have been the cover, rather than the blurb, that was the more misleading.

Carol gives a quick impression of Kerry McGinnis’, Out of Alice (2016), the second of that author’s books she has read: “McGinnis’s trade mark passion for the outback and her ability to portray the locations with such an intensely visual palette is constant across both books; superb reading.”

After reading Cassandra Page‘s review of the self-published Fame (2016) by Lauren K McKellar, I’m wondering if this novel belongs under the category of “Romance and Erotica”, rather than general fiction: “The chemistry — and, let’s be honest, the raw lust — between Madison and Tate sizzles off the page from the first time they meet. And the sex scenes (is that a spoiler?) are scorching. *fans self*” Cassandra finishes her review with: “If you’re looking for a sexy, feel-good story, then I can’t recommend Fame highly enough.”

Two books by Josephine Moon attracted AWW participants’ attention. The first, The Chocolate Promise (2015), Jennifer Cameron-Smith found to be “a lovely escapist read, made more memorable by its (mostly) Tasmanian setting. Evandale in particular came to life, with its wonderful bakery and the penny farthing connection.” (Sounds intriguing!)

No wonder Moon’s books are described as delicious.

Carolyn enjoyed Robyn Mundy’s Wildlight (2016), describing it as a “gentle, slow-moving” book set in south-west Tasmania, a coming-of-age “tale of a family spending six months on an island as caretakers of a lighthouse and weather station.”

The remaining two “M-author” reviews are of The Mint Lawn (1991) and The Grass Sister (1995), both award-winning books by Gillian Mears who, sadly, died this year. Of The Grass Sisters, Catherine Hanrahan writes:

Published in 1995, The Grass Sister, is about Able, a woman readying herself to read her sister Anne-Clare’s letters in an attempt to understand how or why she died several years earlier on an African mountain range. This is a story of memories, of sisters growing up, of a mother who had a profound influence on her daughters, and of how the lives of parents and grandparents in England and Africa have shaped the girl’s lives. [full review here]

It is the beautiful writing, according to Catherine, that makes this “a lovely but sad read”.

Kim Forrester from Reading Matters tells us she picked up Mears’ debut novel, Mint Lawn (1991), after hearing of the author’s death. She gives us a précis:

The Mint Lawn is essentially one woman’s tale — of her disappointing marriage to an older man, and her complicated but loving relationship with her mother, killed before her time in a car accident, over whom she is continuing to grieve.

It’s a story Kim is sure will live on in her memory.

It’s ambitious, creative, powerful, authentic. And it has the feel of having been written by someone who is mature beyond their years (Mears was just 26 when she wrote it). But it’s the story-telling, multi-generational and quintessentially rural Australian, that makes it such a rewarding read. [full review here]

I haven’t yet read either of these novels, despite the fact that Mears’ book, Foal’s Bread, is one of the most profoundly moving I’ve ever read. (I reviewed it on my blog but, please note, it contains a trigger warning.) Perhaps I’ve been waiting for the emotional courage to tackle her other books. You can find more about Mears and her work, including audio and video, on the ABC website here.

Have you read any of these novels? What did you think?