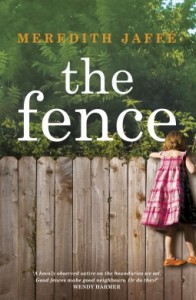 As I slowly work my way alphabetically through the “General Fiction” list on the AWW database, I realise how many books have gone under my radar. Today’s post covers authors with surnames starting with “J”. First up is Meredith Jaffe’s The Fence (2016), which Heidi describes as “a satirical novel” and “one of my favourite Australian reads of the year”:

A portrait of a marriage between two incompatible people in postwar Australia, it’s written in bare, lean prose — the word “skeletal” comes to mind — and yet the story has an intensity that only comes when the author has taken the care to make each and every word count.

Jennifer Compton-Smith found Jennings’ Moral Hazard “intensely thought-provoking” and points out that the story is informed by the author’s life. (Jennings worked as a speech writers on Wall Street and her husband died of Alzheimer’s.)

In fewer than two hundred pages, Ms Jennings covers the slippery moral ground of high finance, where the expected ends always justify the means, and the heartbreaking reality of living with a loved one with Alzheimer’s. What is right, and what is moral? What choices does [the protagonist] Cath have? How can she survive?

Recently two books by Rachael Johns featured on Better Readings’ list of “Australia’s Top 100 for 2016“. One of these, Outback Sisters (2016), Veronica describes as “a light, fun and sexy read” which touches on “themes of family, single parents, siblings as parents and parent-teen relationships”. Another of Johns’ recent releases, The Art of Keeping Secrets (2016), attracted reviews by both Sam and Brenda, and both reviewers highly recommend this story. Sam categorises Johns’ writing as “Life Lit”, and writes the book:

celebrates the power of friendship, just what good friends will do to help each other in need. The three women in this story – Felicity (Flick), Emma and Genevieve (Neve) all have secrets that will have severe ramifications once they are revealed. They turn to each other when their lives are changing hugely.

According to Sam, Johns takes the reader on a gripping emotional ride – which might help to explain her broad appeal and growing popularity as a storyteller.

In The Art of Keeping Secrets, Rachael Johns pushes her characters to the utmost limits but for the reader, this is a bonus. We get to see how the characters all react to extreme stressors (not just one, but multiple times – just as you think she couldn’t throw another spanner in the works, it happens)… After ten or so pages of A Guide to Berlin I was weighing my options. Did I really want to read another 240 pages about a small group of Nabokov enthusiasts in Berlin who meet to tell each other stories from their lives? Especially when those pages promised to include overcooked writing like this:

Shivering, cold, suffering pathetically in a minor key of frozen hands and feet, she aimed her phone through the watery light at the disappointing building across the street, and a man appeared, standing silently beside her.

I’m no fan of Nabokov (if only I could un-read Lolita), which probably explains why I haven’t picked up Jones’ Guide. Jones is a gifted writer and her Dreams of Speaking and novella Sorry have both stayed vividly in my mind since I read them for the challenge in previous years. In fact, when I look back at my reviews I’m surprised I didn’t rate both even more highly. (Maybe Jones is a slow-burn kind of writer – unsettling and intensely thought-provoking –  who tends to polarise her readers?) Apart from reviewing Snake, discussed above, Kim from Reading Matters also reviewed Myfanwy Jones’ Leap, a novel which intertwines two stories of people struggling to overcome grief. One story thread concerns Elise, who lost her teenaged daughter and is coping with a marriage breakdown, and who finds herself secretly watching tigers in the zoo; the other focuses on twenty-five-year-old Joe, who lives in a share-house in Melbourne, works dead-end jobs, and who lost his girlfriend three years earlier. According to Kim, Leap is “an easy to read tale” which has its faults, but its “dialogue is pitch-perfect (the banter between male friends is particularly good) and the atmosphere of share house living beautifully evoked” .

Two more books by “J” authors remain to be discussed, Toni Jordan’s Addition (2008) and Mireille Juchau’s The World Without Us (2015), both of which were reviewed by Kate at Books Are My Favourite and Best. Kate admits when she came across Juchau’s novel, it was the second book in virtually as many weeks about life on a hippy commune; probably not the best entrée to the book, but she was able to enjoy “the truly lovely moments in Juchau’s writing”, revelling in such lines as:

“Tess sees the bare feet first, whizzing through the air. Then the chopstick shins and saggy knickers, the vulnerable dip where the spine meets elastic. It’s her sister Meg, practising handstands and cartwheels…”

“Her mascara was smudged, a stray pin abseiled from her hair.”

Kate was much more enthusiastic about Addition and, I have to confess, the start to her review of Jordan’s book is one of the most arresting I’ve come across:

Confession: I set my alarm for a number ending in a two or a seven every morning. My alarm goes off and then I lie in bed for another five minutes until a two or a seven rolls around. On days I don’t have an alarm set, I wait for a two or seven before getting out of bed. Naturally, my ultimate get-up time 7.27am – unfortunately that would be considered a sleep-in these days… Anyway, before you start thinking that I am completely OCD, know that if the house was burning down I wouldn’t wait for my digital clock to click to a two or seven. I’m obsessive but not compulsive (or is it the other way around?).

There’s safety in numbers, as Grace Vandenburg, the main character in Toni Jordan’s Addition, knows. Grace’s life is ordered by numbers – how many bananas she buys, how many steps she takes to the café, what time she cooks her dinner, how many strokes it takes to brush her teeth.

I’m not sure which I’m more attracted to, Jordan’s book or Kate’s review: they both sound deliciously quirky. As an aside, Kate notes that Jordan’s book has had five separate and different – and to Kate’s mind “terrible” – covers. (I hope she’ll forgive me for downloading her collage of the collection here.)

According to Kate, the covers are the only downside to the book:

If you’re looking for something light – edging toward the chick-lit or rom-com end of the spectrum – Addition is a great pick. It’s not all fluff. There’s a deeper message but not one that you might expect. There’s also a plot twist that breaks the traditional chick-lit mould.

I’m looking forward to discovering the rest of the alphabet and all the other great books – and reviews – I’ve missed.